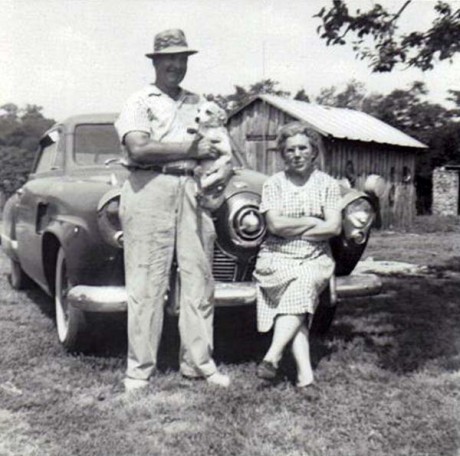 Now, Pop was funny about his watermelons. We could eat all we wanted with only one rule in mind. No one — and I mean NO ONE — was allowed to touch his seed watermelon. He always picked out one watermelon to save seed for the next season. He always told us all which one would be the one not to touch, and we respected his wishes.

One day as we were leaving the tobacco field to go to the house to wash up for lunch, we noticed Pop was mad about something. When we got to the house, he got us all together and told us what was wrong: "Someone has got my seed watermelon! I'm mad as an old wet hen!"

Pop said, "OK, I figured someone might steal that watermelon, so I put poison in it. And the only thing that will kill the poison is to eat a pound of lard all at once."

We had a boy working with us who lived up the hill from Pop. He pulled tobacco along with us grandkids. He always ate lunch with us every day. Well, when he heard what Pop said, he got real bad off sick and had to run home. Well, you know what happened: He went straight home and ate the whole two-pound can of lard that his mother had.

Pop was a wise man. He found out who got his seed watermelon. And the boy learned his lesson, and is still a friend of our family. I see him often, but I never bring up watermelons.