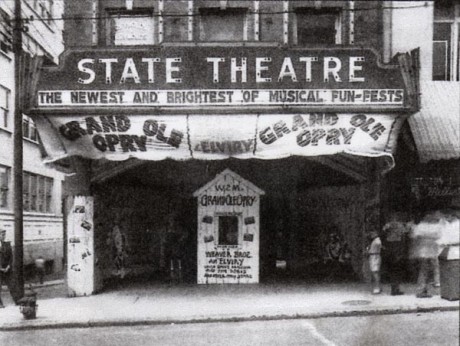 As a young girl, my parents and I traveled from the Midwest to Asheville almost every summer to visit Aunt Mattie and Uncle Joe Simmons. She was a great southern cook, and he had a belly laugh like no one else's.

Uncle Joe started working in theaters as a young boy, pumping the organ so it would play during silent movies. He later became a projectionist which required him to lift the large and heavy reels of film in order to change them at intermission.

When he worked at the State Theater in downtown Asheville, I would sometimes go with Aunt Mattie to take him supper. She would heap a metal pie plate with pork chops, fried potatoes, cornbread and homegrown green beans, and then cover the plate with foil. A Mason jar was filled to the brim with icy, cold sweet tea. When we got to the theater, we had to climb the steep, dark stairway to the projection room.

Uncle Joe greeted us with a big smile when we got to the top of the stairs and gladly took the jar and pie plate from our hands. About halfway through his meal, he would rub his stomach and say, "Mm-mm-mm good, Mattie!"

I loved watching Uncle Joe eat his "theater dinner" knowing I would get the same thing for my supper when Aunt Mattie and I returned home.