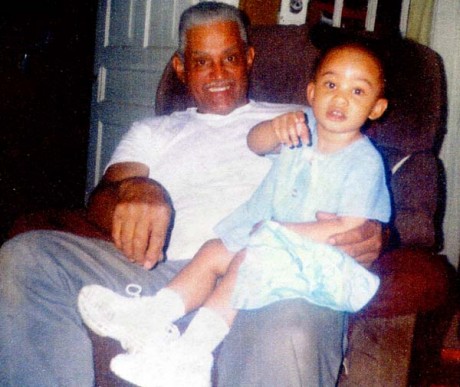 On occasion I come across this photo of Uncle Johnny with his daughter on his lap.

One of the best neighbors I knew was Uncle Johnny. I remember the first time I saw him. I had asked another neighbor to disc me a garden and run some rows. The next day, my neighbor was doing just what I had asked. Soon, Uncle Johnny came along on his tractor to help.

Wow! I thought. These guys are really good to have as neighbors. Little did I know that whenever there was work to be done, Uncle Johnny was willing to help. He would help cut grass and weed eat in the neighborhood. During the winter when there were pipes that burst, Uncle Johnny would help fix them. Not only did he fix a busted pipe, he could do other plumbing, too.

He was also the neighborhood watchman. If anyone came by, he would let you know.

Uncle Johnny has gone to live in a better place now. But we will always cherish our memories of him.