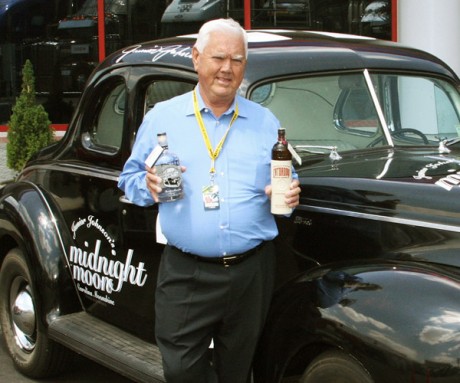 Joe Michalek will never forget his first taste of moonshine. He was at a blues jam session in Pinnacle, Stokes County, in the skirts of Pilot Mountain, when someone passed him a glass jar. He took a nervous swig but was relieved. What he thought would be awful was smooth and delicious, with a peachy sweetness. At his next meeting with a mystery jar, Michalek was braver. This time the drink tasted of strawberries, but it had the same clean finish.

The native New Yorker had stumbled onto a regional liquid delicacy. Folks have been illegally making and running moonshine in western North Carolina for as far back as most of them can remember. Their daddy made it. Their granddaddy made it. Their great-granddaddy made it. Farmers grew corn and turned it into white lightning. This enterprise reaped much greater profits than the sale of the grain outright. If people owned up and paid taxes on their moonshine, there would have been little money left to support their families.

Michalek was smitten and fast became a student of all-things-moonshine — the history, the culture, the lore and legend. Before he knew it, friends were vouching for him with the local whiskey makers and Michalek gained entry to an exclusive club, the moonshiners’ inner circle. These craftsmen freely shared their liquor and their family stories. “I thought, why isn’t anybody selling this legally so that everyone could find it, not just the ones that know somebody?” Michalek began distilling a notion. What if he could make moonshine on the up and up?

He started doing his homework and discovered a dormant North Carolina liquor-manufacturing license held by two men who’d had, but abandoned, a similar idea. He followed the paper trail to an abandoned train depot in Madison, Rockingham County, not 20 minutes from his house. Inside were wasps, birds and a dusty copper still that had produced only one sad run — a 19-gallon batch of scuppernong brandy — before the owners had to turn to other obligations. Michalek snatched up the property and prepared to get his distillery up and running. With license in hand, he started turning out what old-timers called “government moonshine,” a nickname for the whiskey that gave the authorities a piece of the action.

Michalek’s original recipe was inspired by one of his favorite illicit drinks, “apple pie,” corn liquor flavored with apple juice or cider. His concoction has a complex flavor — both sweet and spicy. Some consumers say they detect vanilla, cinnamon, nutmeg and citrus notes, but Michalek guards his recipe just like his friends in the underground do. In 2005, the first batches of “Carolina Catdaddy” made their way to the central distribution warehouse of the state’s Alcoholic Beverage Control Commission and on to ABC stores across North Carolina.

Michalek’s debut was a feat — Piedmont Distillers was the first legitimate whiskey to see the light of day in North Carolina. But a bigger coup was coming down the pipe. He would soon persuade someone from a storied family of Wilkes County moonshiners to be his business partner, arguably the fastest and most famous bootlegger in the South, Junior Johnson. Before Johnson became a legendary NASCAR driver, he was hauling his family’s hooch to towns all over the state map. In the middle of the night, the 14-year-old raced his daddy’s souped-up car over narrow roads and around hairpin turns to outpace federal tax agents on his tail. Johnson, who turned 80 in June, says his family cranked out more moonshine than anyone in the area. “Sometimes we’d be making four or five thousand gallons a week,” he says — 300 to 500 gallons to a batch.

Through their connection to RJ Reynolds Tobacco —  Michalek was its top marketing executive at the time and Johnson had a longstanding NASCAR sponsor relationship as driver and team owner — the two entrepreneurs crossed paths. Michalek bent Johnson’s ear about his start-up company and extended an open invitation to come on board. One day, Johnson showed up at the distillery with a friend who wanted to see what it took to “go legit.” During that visit, Michalek floated another friendly “How ‘bout it?” To Michalek’s delight, Johnson jotted down his family’s secret recipe on the spot, then issued a challenge: Fire up your still and show me what you can do.

Michalek cooked up three batches of Johnson’s recipe at 80, 90 and 100 proof. The next morning, he brought samples to Johnson’s shop, where folks sit down to breakfast with him every day. The ’shine was passed around and the 80 proof got the best marks. Michalek asked Johnson, “So, whaddya think?” And he responded, “That’s pretty good stuff.”

They rolled up their sleeves and got to work, with Johnson bringing his tools to fabricate a replica of the family still. After some high-tech tweaks, the spirits started flowing and a new brand was born: Junior Johnson’s Midnight Moon, even better than the original recipe, Johnson says. His daddy would distill his moonshine two times in a “double-thumper” pot still. But this new-and-improved product is triple-distilled. Johnson describes the result as something like vodka but sweeter and smoother, the former owing to the corn and the latter to the added purity.

To make Midnight Moon, a mash of cornmeal, sugar, yeast and barley that is fermented in white oak barrels for several days, then heated. Alcohol boils at 173 F, compared to 212 F for water, so when the mash reaches that temperature, the alcohol rises as vapor, leaving water and any unwanted byproducts behind. The vapor is channeled to an adjacent tank where it’s cooled and condenses back into alcohol, more concentrated this time. It is boiled a second time and the vapor goes into copper coils in the last tank and condenses again. The resulting liquid makes a final pass in the German column still that Michalek originally found in the building.
Piedmont’s master distiller is Brian Call, a seventh-generation whiskey maker who likes to say he was home-schooled in the art of making moonshine. Call has drawn from his family’s and Johnson’s recipes to create Piedmont’s most recent offering, a line of fruit-infused spirits. “Fruit Inclusions”, which uses Midnight Moon as a base, is made in strawberry, cherry, apple pie, cranberry and raspberry flavors. Johnson says the cherry version reminds him of the sweetened ’shine that families made in small batches they saved for themselves. “People liked the cherry taste and they’d put it in the whiskey to make it smooth.”

Piedmont Distillers will be open for tours and tastings at the 3rd annual Carolina ’ShineFest July 30–31 in Madison. Junior Johnson will be signing bottles of his moonshine at the festival, which will also feature a display of bootleggers’ cars and live music, crafts and a farmers market. For more information, visit www.southernculturesociety.org

All of Piedmont’s spirits are made in 300-gallon batches — enough to fill about 1,500 750-ml jars or bottles. To date, the products are sold in 32 states. The company is driving hard to outrun new competition. When Michalek started, only two other legal distilleries in the country were selling corn-based spirits. Today, dozens are marketing products with “moonshine” on the label. Piedmont is also no longer the lone distillery in North Carolina. There are now two other active ones — Carolina Distillery in Lenoir, which makes apple brandy, and Southern Artisan Spirits in Kings Mountain, which makes gin.

Michalek still has illegal competition, but it’s friendly, he says. He reckons that several hundred moonshiners have toured the distillery. What do they think of his flavored hooch? Some say, “Too sweet for me,” he says. “But nobody’s said ‘It’s horrible!’” Asked what his daddy might think of Midnight Moon, Johnson says, “Oh lord, his chest would bust.”