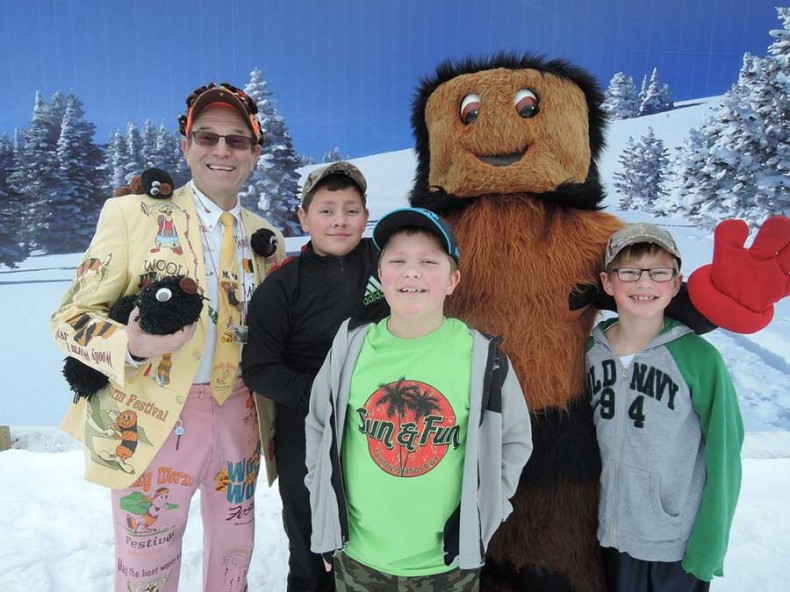 Roy Krege poses to promote the Woolly Worm Festival with the Woolly Worm mascot (Merryweather) and a few children from the community. Photo courtesy Avery County Chamber of Commerce.

Banner Elk, the small mountain town known for its annual fall festival celebrating the tiny woolly worm, is home to a big personality. Roy Krege, known as Mr. Woolly Worm, is a lively, chant-yelling, woolly-worm-race-calling, emcee extraordinaire who pulls people in to the excitement and generates laughter and goodwill.

“Roy is as excited and focused on calling the worm races as the announcer of the Kentucky Derby,” says Mary Jo Brubaker, governor‑elect, Carolinas District of Kiwanis International. “Roy’s energy is contagious.”

As Mr. Woolly Worm, Krege dons a special yellow jacket and pink trousers with all sorts of festival-related logos, slogans and graphics. His special hat has woolly worms crawling all over it and he grows a thick beard for the festival. Not everyone has the moxie to carry that off, adds Brubaker.

Through his year-round promotional efforts of the festival and its iconic weather-predicting caterpillar, Krege has helped grow the Woolly Worm Festival into a major attraction.

“We promote everywhere,” he explains. “We make a big deal of it. Even the BBC [British Broadcasting Corporation] has done three specials on the Woolly Worm Festival!”

Despite this, he claims to be only the front man.

“I get a lot of attention, but there are a lot of other people in the background who do a lot of work. There wouldn’t be a festival without them,” he says.

On a recent Saturday as Krege flipped through scrapbooks of photos, certificates and mementoes, it was apparent that this man — who volunteers as emcee for countless events, is a charity auctioneer, is involved in Lees-McRae Summer Theatre and myriad other activities — relishes his role in a community he loves. He tears up when recalling special memories of how involving others and making sure they have some attention makes such a difference.

“I love to do things that other people can enjoy,” he says. “The festival is a way to offer something to folks who live here and those who visit. Whether you are three years old or 90 years old, you can race a woolly worm!”

Krege’s service mindset seems to be his biggest hallmark, and those who know him affirm that.

“Roy Krege is the closest person to a Good Samaritan that I have ever known,” says Brubaker. “He is a friend to all and cares deeply about his family, friends and community. Roy is a true servant leader. People in our community look to Roy for leadership because they know he will work hard to ensure the success of any responsibility he takes on.”

October 21 and 22 this year will mark the 40th Annual Woolly Worm Festival (woollyworm.com). Krege, who has been involved every year (and as Mr. Woolly Worm for 38), will be honored for his numerous contributions to Banner Elk and Avery County.

“Roy gives beyond the call of duty with any project or task he has at hand,” says Babette McAuliffe, a member of the Avery County Chamber of Commerce and publisher of Carolina Mountain Life magazine. “He has single-handedly given so much back to our community in terms of volunteer hours that it would take five people to replace the jobs and tasks he takes on to make this a better place to live.”

It’s a bittersweet time for Krege. Due to health issues, he is passing the torch to three others who will work together to fill his shoes as Mr. Woolly Worm at this year’s festival.

“My guess,” says McAuliffe, “is that we will still see him braking for worms on the roads and at the festival giving his all to the thousands who visit. When I see him out and about in the community, I know he is on a mission to make a difference.”