Fifteen years ago, the renewable energy landscape in North Carolina was very sparse. There were only a few large solar installations, wind turbines were practically nonexistent and less than a dozen landfill methane-to-energy projects were in operation. Then in 2001, a group of forward-thinking people came together to blaze a trail toward bringing green energy to North Carolina. Advanced Energy, then a 20-year-old non-profit in Raleigh, began working with consumers, environmental representatives, electric utilities, technology suppliers and regulatory agencies to turn North Carolina into a national model for renewable energy.

In October 2003, NC GreenPower was launched to supplement the state's existing power supply with more green energy — that is, energy generated from renewable energy sources like the sun, wind, water and organic matter. NC GreenPower's first projects began coming online in 2004. Two years later, the organization cut the ribbon for its first landfill generator and wind turbine. In 2008, the program added a carbon offset product, giving North Carolinians the opportunity to offset emissions caused by driving or other activities by mitigating greenhouse gases via landfill or hog lagoon methane capture projects. Fast forward to today and North Carolina boasts a ranking of 5th in the nation for solar electric (photovoltaic) installations, an achievement that was spurred by the creation of NC GreenPower in partnership with the utilities, including North Carolina's electric cooperatives. 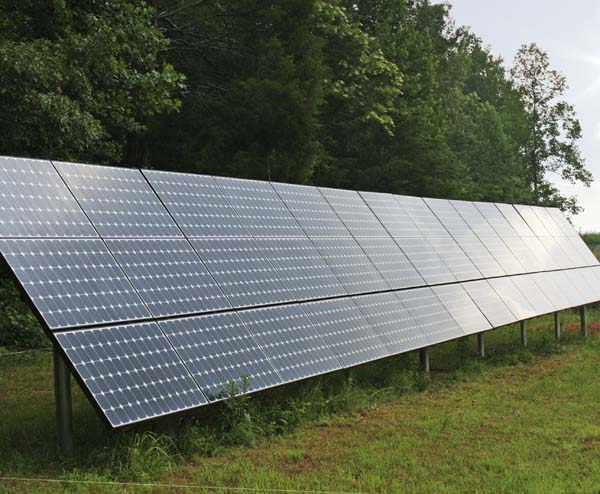 This 10-kilowatt solar array in Burke County (Rutherford EMC service territory) has been generating electricity for the NC GreenPower program since 2009 with an average annual output of 14,000 kilowatt-hours. There are nearly 200 NC GreenPower-supported renewable energy projects in the areas served by the state’s electric cooperatives. (Photo: NC GreenPower)

Since the launch of the program, NC GreenPower renewable energy projects have generated 443 billion kilowatt-hours of green power, and donors have helped provide nearly $5.5 million in incentive payments to the owners of about 900 renewable energy projects, in almost every county across the state. That's the equivalent of providing 30,800 houses with energy for a year. Carbon offset projects have mitigated 10,300 tons of greenhouse gases — equivalent to the emissions from driving 29 million miles — and that's like planting 1.6 million trees.

Of the 600-plus green energy projects currently online through the NC GreenPower program, nearly a third of those are generating clean power within the North Carolina electric cooperative territories, providing both an economic and an environmental boost to those communities. Nearly 350 electric cooperative members have generated renewable energy for the NC GreenPower program over the last 10 years

How you can help

Contributions to NC GreenPower help to offset the higher costs associated with producing green energy and mitigating greenhouse gases. When you donate to NC GreenPower, you help support these cleaner, greener facilities that benefit all North Carolinians. Statewide efforts of NC GreenPower also include community outreach and student volunteer opportunities.

Donations to the program can be made by individuals or businesses through their utility bill or directly to NC GreenPower on its website: ncgreenpower.org. Projects are located within North Carolina, so you can be assured that your contribution will stay local, supporting a brighter future.

NC GreenPower is a 501(c)(3) nonprofit that administers the voluntary program on behalf of all utilities in North Carolina, helping to connect consumers with green energy and carbon offset providers to create positive environmental and economic impacts for our state. NC GreenPower was formed and is administered by Advanced Energy, a nonprofit that focuses on energy efficiency for residential, commercial and industrial markets, motors and drives and electric transportation.

Katie Shepard is marketing and communications manager with NC GreenPower.