At the Solar Decathlon, houses designed and built by students show how sweet homes can be

Since 2002, college teams from around the world have been invited to design and build a home that can produce as much energy as it consumes. Their projects are showcased every two years during the U.S. Department of Energy's Solar Decathlon.

This year's decathlon village in Washington, D.C., in late September featured 19 entries with more than 357,000 public home tours conducted during the 10-day event. Competition rules stipulate that each home fall between 600 and 1,000 square feet of conditioned space. Energy can only be provided via the electric grid or solar processes.

A true decathlon, teams receive up to 100 points in each of 10 areas that go beyond mere solar technology: 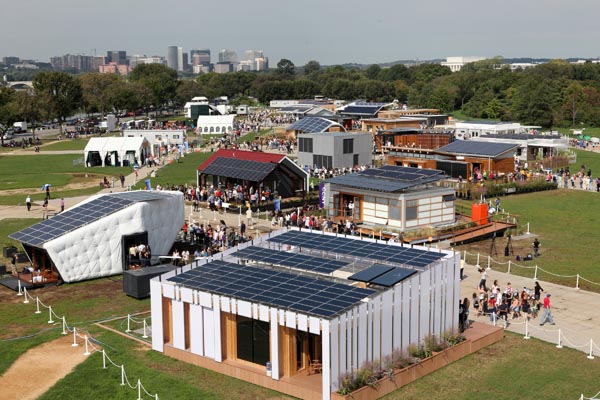 If ever a team had the perfect mascot for an efficient housing competition it was this year's winner, the University of Maryland Terrapins. Their entry, entitled WaterShed, drew its inspiration from the Chesapeake Bay ecosystem, which has been significantly impacted by water pollution. WaterShed featured a vegetative roof system that naturally filtered storm water and slowed runoff while cooling the roof in summer and acting as insulation in winter. Gray water from showers, dishwashing and laundry was filtered through the home's constructed wetlands and then recycled to irrigate the landscape which included a vegetable garden. Maryland captured the decathlon title with a near perfect score of 951.

Drawing on the familiar

Maryland wasn't the only team to draw on its locale for design inspiration. Florida International University's entry featured louvered overhangs to provide year-round shading, which when lowered and locked in place became instant storm shutters for hurricane protection. The shell of New Zealand's house, entitled First Light, was insulated with sheep's wool sourced from local ranchers. The most far-out looking structure came in the form of California's Compact Hyper-Insulated Prototype affectionately dubbed C.H.I.P. The team used recycled blue jeans to create "out-sulation" encased in vinyl and strapped around the home's exterior giving it the look of a puffy, white parka. C.H.I.P. also sported an Xbox 360 Kinect system modified to recognize various body motions to control lights, television and other electronics. Team China, in a nod to their country's export business, constructed a home from three metal shipping containers. A tipi-like structure paid homage to Team Canada's native communities. City College of New York designed a Solar Roofpod that could be sent up by elevator and reassembled to sit on an urban rooftop to maximize use of existing space.

Regardless of where teams originated, to prepare for the competition each had to extensively research meteorological data for Washington, D.C., which in early fall can range from a heat wave to the first signs of frost. Logistical challenges were numerous with homes originally built off-site, disassembled, shipped to D.C. and then reassembled in West Potomac Park. Once competition is under way, teams are not allowed to use batteries or other power storage devices. Unlike years past, when affordability was not part of the decathlon scoring system, teams can no longer justify the investment in large solar arrays. The focus is clearly on better whole house design with emphasis on passive systems including energy efficient landscaping, super insulated walls, non-mechanical dehumidification and waste heat recovery. The less energy you need, the less you must generate. 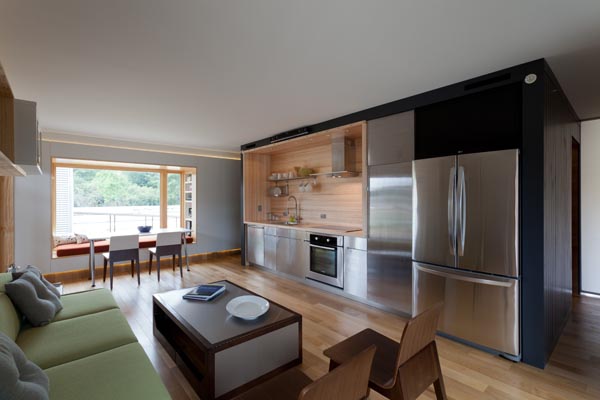 Home is where the heart is

While Maryland captured this year's official decathlon title, one home clearly captured the hearts and minds of visitors and that was Appalachian State University's (ASU) entry, The Solar Homestead. It won the coveted People's Choice Award, receiving 92,538 votes cast online and at the event. Inspired by the frugal self-reliant spirit of early Blue Ridge Mountains settlers, the house is predominantly clad in maintenance-free poplar bark. The Solar Homestead comprises four separate structures joined by a great porch which adds 900 square feet of usable outdoor space, including a sink and food prep area. The roof of the great porch was constructed using 42 bifacial photovoltaic panels that supply solar energy while providing filtered daylight to the deck below. Straw bale gardens surrounded the house and provided fresh vegetables for the team's two mandatory dinner parties. The 864 square-foot main house features a kitchen with full-sized appliances, master and guest bedrooms, living and dining areas, as well as bathing and laundry facilities. Hidden pocket doors in the kitchen allow for the configuration of a full-sized home theater screen that helped ASU finish third in the home entertainment category.

ASU received a perfect score in the hot water contest with its on-demand solar thermal domestic hot water system. The home's mechanical heating load was reduced through the construction of a trombe wall that collects outdoor heat during the day and transfers it into the house at night as conditions dictate. The home's unconditioned outbuilding modules (OMs) could be customized to accommodate a buyer's needs for storage or mechanical space. A Flexible OM, designed to serve as conditioned office or guest bedroom space, could also be detached and towed as a standalone camper. The Solar Homestead is particularly builder-friendly because most of the construction materials were found at Lowe's home improvement stores, ASU's primary building sponsor. The Blue Ridge Electric cooperative also was a sponsor.

The ASU team utilized a renewable energy source not officially recognized by decathlon rules: enthusiasm. In keeping with their conservation and energy efficiency mission, the team's male members stopped shaving in advance of the competition and soon a Beard Blog showed up on the Internet. But the star of this year's decathlon was the ASU reflective hat takeaway that doubled as an educational brochure. Folded origami style to resemble a short order cook hat, the piece unfolded to reveal a copy of the home's floor plan along with an explanation of the various energy components. That helped ASU secure a second-place finish in the decathlon's communications contest.

The Solar Homestead has now returned to Boone where it will serve as a learning laboratory for future students. At a reception for the ASU team held in Boone at the end of October, Gov. Bev Perdue said, "These students have shown America that we can do things in North Carolina. We all know that in North Carolina green is gold and that we must as a people focus on building a green enterprise for our state."

Learn more about the Solar Homestead at www.thesolarhomestead.com