No longer a ‘shad’ story

Since Europeans settled the New World, and probably before then, the silvery, 12- to 18-inch fish known as shad have nurtured the people living on the lower Cape Fear. Sometimes sport, sometimes food, sometimes livelihood — the ocean-living, inland-spawning fish arrive by the thousands in early spring. They flip their lively tails up the Cape Fear — the females leading the pack — as they try to make it back to their ancestral spawning grounds upriver. They're aiming, say biologists, for the spot on the river in Harnett County where the rocky Piedmont meets the sandy Coastal Plain. There, the females who make it will lay their eggs on the rocky river bottom, to be fertilized by male sperm and start the cycle of life all over again.

For the humans along their upward path, it's that journey — the springtime shad run — that counts. They line the river's banks with poles, maneuver boats in the frothing waters below the river's three lock/dam combinations, and greet relatives and neighbors at big shad-run-inspired parties.

"Since I was little, I remember coming down here," says Troy Snowden (a Four County EMC member) as he waits for the fish to fry at this year's Blue Monday celebration.

The day — the first Monday after Easter — is always a big one for the Graham and Blanks extended families, he says. The communal fish fry started informally back in the 1940s, just a "skip and a stone's throw" from Lock & Dam No. 1, says George Graham (a Four County EMC member) and the son of one of the founders, Archie Graham. His sister, Prudie Graham Long of Riegelwood (a member of Four-County EMC), her cousin Hazel Graham McGlockton of Whiteville (a member of Brunswick EMC), and cousin Claris Graham Nobles of Whiteville, remember when, as children, they'd climb through a fence and traverse a cow pasture to get to the river below Archie Graham's home. There, the adults were cooking shad pulled from the river. 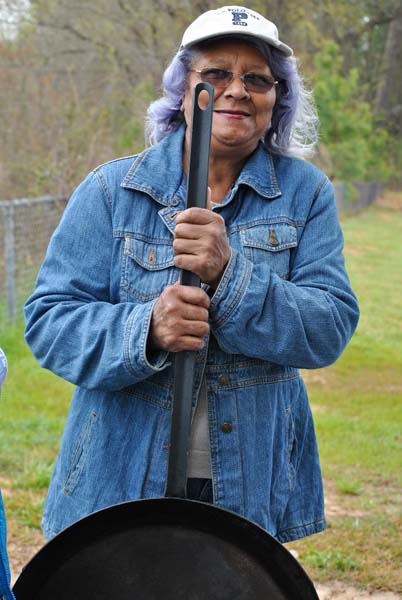 "We had a good time then, too," remembers Nobles.

By the 1950s, friends and neighbors and relatives who had moved away were joining them, and Blue Monday moved to the park beside the dam, where more than 300, including members of the general public, attended this year's feast.

"I'm not the organizer," says George Graham, pointing out the holder of that distinction, his cousin Jesse Blanks (also a Four-County member). Instead, he says, "I'm a donater" — of 60 shad.

Instead of reeling the shad in one by one, Graham and others who hold the necessary commercial fishing licenses now net the shad ahead of time.

Another party, the Cape Fear River Shad Festival, took place at the park the next weekend "to share our history and our relationship to the spring arrival of the shad," says Earnestine Keaton, president of the sponsoring Lower Bladen Columbus Historical Society.

Help from the rapids

Shad, a kind of herring, were smoked and exported in large numbers in the 1800s, while their eggs, or roe, fed caviar factories. But over-fishing and the introduction of dams that kept them from their spawning grounds cut greatly into their numbers.

Wildlife agencies started putting limits on catches. And for more than 50 years, the Army Corps of Engineers, which manages the dams, has helped part of the run make it up the Cape Fear by lifting the fish in the locks originally meant for steamboats and barges. Until this year, that is, when it's a whole new ball game at Lock and Dam #1, the most downriver of the three lock/dam combinations. There, 39 miles above Wilmington near Riegelwood, several hundred feet of boulders have been piled below the 11-foot dam, turning it into a natural-looking rapids that the fish can jump themselves. 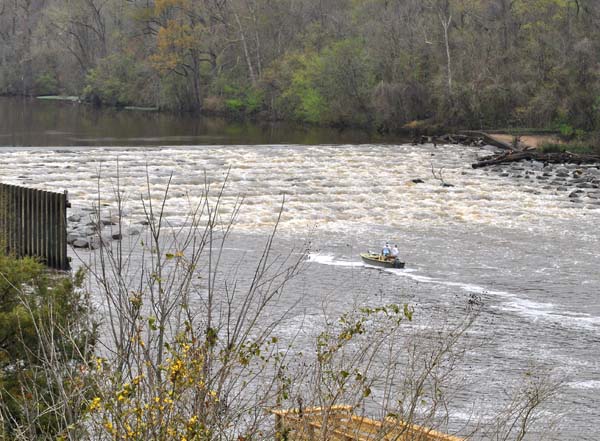 The new rock arch rapids that the shad jump on their way upstream.

The dam-wide rock arch rapids, a joint project of the Corps and the state, cost $13 million in federal "stimulus" money and was completed in November 2012. Similar to some in the Midwest, it's expected to increase the number of fish making it past the dam during the March-June run, thus enhancing the chances for a shad recovery.

If it's successful, fish experts hope to see similar solutions at Lock and Dam No. 2, at Elizabethtown, and No. 3, at Fayetteville. Like No.1, they are relatively low-height dams that impound much of the region's water supply.

Shad not only are prized for their roe and, by some, for their taste, they are economically important as food for the larger fish that sportsmen and commercial fishermen catch.

But are the fish getting the message to jump the rapids? 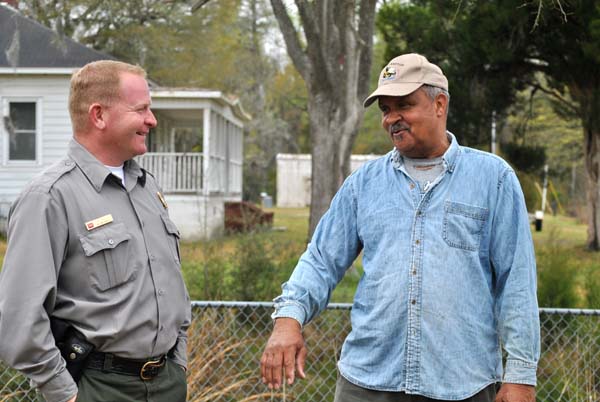 Most definitely, says Buddy Guy, park ranger at No. 2. The fishermen and women who've been lining up below that dam agree.

Not only are they making it over the rapids and 33 miles upriver to No. 2, they started much earlier this year. Tom Charles, park ranger at No. 1, says he usually he starts lifting fish mid-March. This year, the first fish was taken at No. 2 on Feb. 18, says Buddy Guy.

Veteran fisherman William Henry Poe of Elizabethtown¸ who keeps meticulous records, says he got his first on Feb. 27, then "two on the 15th of March, one on March 19, five on March 26, one on March 29." Last year, they didn't start biting his brightly-colored shad darts until the last of April.

Poe, who drove a Trailways Bus and an 18-wheeler for 36 years, is retired after a heart attack and stroke. "I'm down here every day," he says. "I do it for the thrill of catching them. I don't sell any. A lot of them I give to old people who can't get down here."

A similar open-heartedness prevails at Blue Monday, where George Graham likes to see "everybody come to eat, bring a good appetite, leave full and enjoy themselves." There's no charge for anything — not the shad, nor the hushpuppies, the egg roe, nor the fixin's.