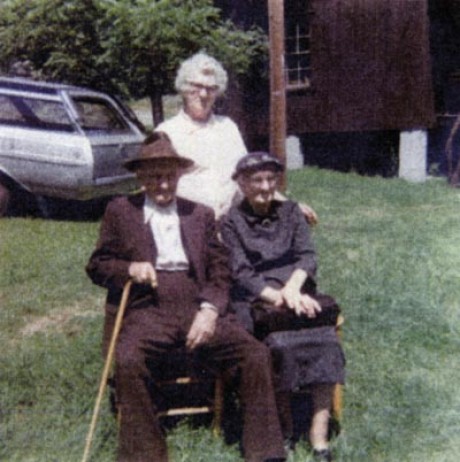 These are my grandparents, John and Lottie Calloway, and their friend Julie Aldridge. They lived a long time on Old Tweetsie Trail in Foscoe, in Watauga County.

As a child, one of the times I looked most forward to was the time of year the sugar cane got ripe and was ready for stripping on my grandfather's farm. Every year we all helped to pull the fodder and get the cane ready for grinding. Pappy had an old mule that he kept for plowing and pulling the cane mill. The mule was hooked to the mill, and all day long he would walk round and round grinding the cane. Juice poured from the spout into large cans that Pappy placed under it. Then my grandmother strained the juice and it was ready to pour into the big boiler over the red hot fire. Now the long slow process started of boiling the cane syrup into molasses. We dipped and stirred again and again and finally began to skim off the foam.

After the syrup cooked long enough and was thick and black enough to be called molasses, we poured it from the boiler into large tin cans and put the lids on tightly.

The most fun of all was the ending of the molasses boiling. Our grandfather made each one of us a wooden paddle with his knife. We all gathered around the boiler and sopped it dry of the hot, new molasses.

One thing that always disturbed me a little about the "molassy" boiling was the pity I felt for the poor old mule that had to walk round and round all day long.