Scotty McCreery at 17 has been on the ride of his life, and his hometown of Garner has taken the trip with him. 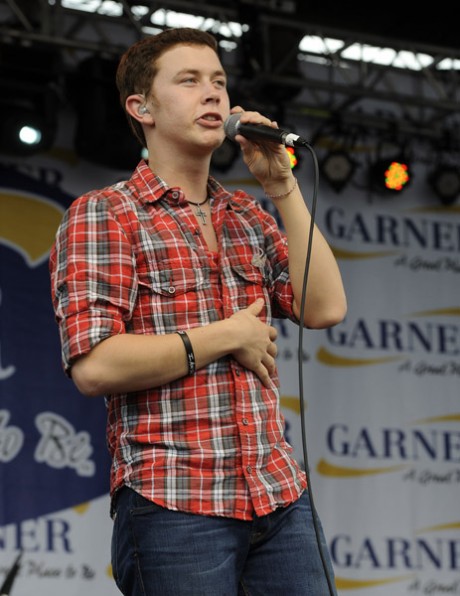 At the May 14 concert at Lake Benson Park. (photo AP Images)

As his chances to win the “American Idol” TV singing competition grew this spring, so did talk around our town. For instance, Scotty’s mama’s best friend at First Baptist Church has her hair done by my hairstylist, who told me the family may have to move to Nashville or Los Angeles now that Scotty is the American Idol.

You could tell someone’s connection to Scotty by their t-shirt. First Baptist Church members wore yellow shirts with “TEAM SCOTTY” on the back.

The people at the Fonville Morisey real estate office, where Scotty’s mom, Judy, works, dressed smartly in bright red shirts that proclaimed, “We Are Sold On Scotty!” Employees from Lowe’s Foods (where Scotty once bagged groceries) appeared at Scotty events in their green shirts and aprons passing out cupcakes. A throng of teenagers from Garner Magnet High School (GMHS) wore t-shirts in the school’s Trojan blue that read “BLUE CREW,” just like the one Scotty wore on TV.

And all of us adopted the town‘s new slogan, “Go Scotty!”, seen in yards and on buildings everywhere.

In April, I began bringing a group of excited 7 to 12-year-old girls to Scotty viewing parties Thursday nights. These events were like a church picnic and included lots of food and Scotty crafts for the kids: quilt squares for Scotty, a “Go Scotty” flag, a “We (heart) Scotty” hat. We loved Scotty, his impeccable southern manners and how he professed his strong Christian faith.

On the morning of May 14, some 30,000 fans came to the Scotty parade and free concert at Lake Benson Park. (Garner’s population is all of 26,000.) Foreboding black clouds and possible thunderstorms didn’t keep a soul away from the day-long event that culminated with Scotty’s performance that afternoon. Scotty told us he prayed for good weather, and sure enough the party was over before the rain came.

Just before the show’s May 26 season finale, church member David Andrews handed out “My Story” pamphlets that chronicle Scotty’s upbringing and suggest “How to begin a relationship with Jesus Christ.” Like so many in Garner, Andrews has known Scotty and his family for years. “If you see an older lady out here with one of these shirts on,” he said, “she may have very well once changed his diaper.”

I took my daughters to be among the 8,200 people to see the finale aired on a big screen at the RBC Center in Raleigh. We met Roxanne Nathe, in a familiar red t-shirt, fanning herself with a picture of Scotty‘s face on a popsicle stick. She mused on how we could win the competition. “It’s the support you get. It’s all about your state, all about your town.”

And Garner was in it to win. Legions of little girls and their mothers and grandmothers (including my own!) voted by text, phone and online. One mom texted her vote 200 times. Another said she voted the maximum 100 times online and then switched to voting by phone. She estimated that she got through several times a minute for four solid hours.

Here in Garner, Ford donated $10,000 to Garner Magnet High School. Profits from the sale of Scotty t-shirts and merchandise will be donated to Scotty’s favorite charities. He chose the Chorus Department at GMHS, his youth missions group at First Baptist Church and the GMHS baseball team, which needs new uniforms. Paulette Disbrow of PKD Screenprinting, said, “All that money is going to stay right here in Garner.”

So now, people who live in the nearby city may say, “I’m from Raleigh. You know, just outside Garner.”