A volunteer group is committed to helping neighbors stay dry

By Jean Gordon | Photos courtesy of The Women Roofers

Meet the crew of The Women Roofers.

Jane Alexander Bell calls from a Rutherford County rooftop as her workmate, Susie Kernodle, climbs down to pick up cold water for the crew. 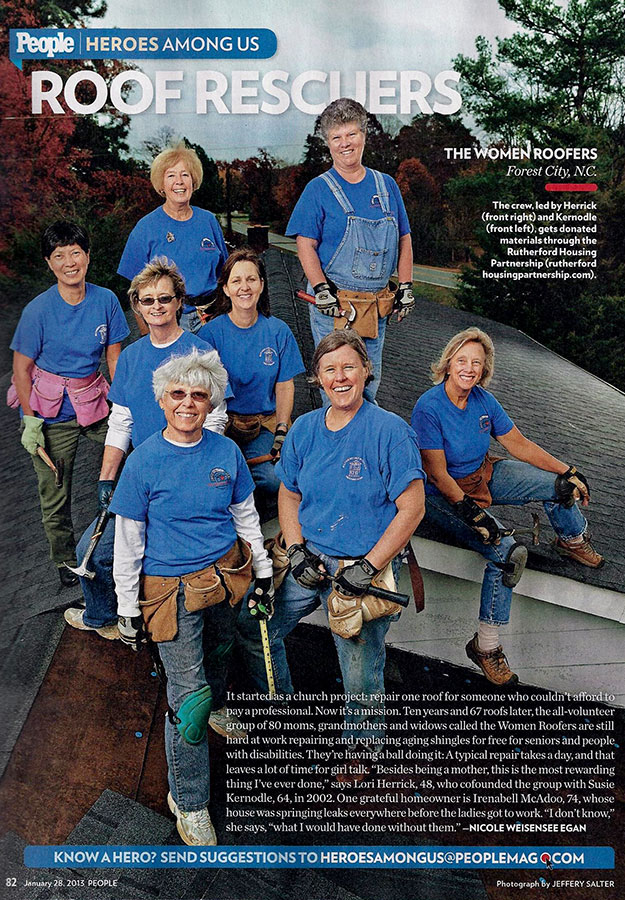 The Women Roofers gained national and international recognition a few years ago, appearing in People magazine.

“Shingles are up,” Jane calls, adding the quip: “Shouldn’t we be pulling weeds, dusting or doing other housework?”

Not this crew — despite the telltale white hair that distinguishes the two septuagenarians. Their motto? “I’d rather roof it than clean it.”

They’re part of the internationally recognized Women Roofers, who have been roofing houses for those in need since 2002.

“We hope to get finished before the heat of the day,” Susie says

The Women Roofers group was born when the only representatives of a Sunday school class at First Baptist Rutherfordton to show up to help Billy Honeycutt with a roof repair were two women — Susie and Lori Herrick.

Expecting to be asked to go back home and reschedule the project date, the women were pleasantly surprised when Honeycutt told them: “Well, let’s get to work.”

The two spread the word, and by spring, a group of 11 women gathered to replace the full roof for that elderly homeowner under the patient guidance of “Bossman” Billy, as he is affectionately and respectfully called. He taught the women all that he knew and still guides their efforts when needed.

“The work is rewarding because you know you’re making a difference for someone who has a need. The secondary benefit has been such tight friendships with a great group of women.”

Helping those in need is at the heart of what they do.

“When we leave,” says roofer Becky Spencer, “their situation is better than when we came.”

“I can’t say it’s not hard work anymore,” says Laura Hodge, a pharmacist and one of the original roofers. “But this is my way of doing God’s work. He gives me the strength, and the camaraderie is great.”

"There is a core group of 17 who show up for most work and offer leadership,” says Nell Bovender, the group’s coordinator who is also the director of Rutherford Housing Partnership (RHP), the nonprofit that depends on the efforts of the roofers. RHP provides urgently needed repairs to the homes of qualified low-income homeowners in Rutherford County.

“The work is rewarding because you know you’re making a difference for someone who has a need,” Nell explains. “The secondary benefit has been such tight friendships with a great group of women. This is the most rewarding work I have ever done.” 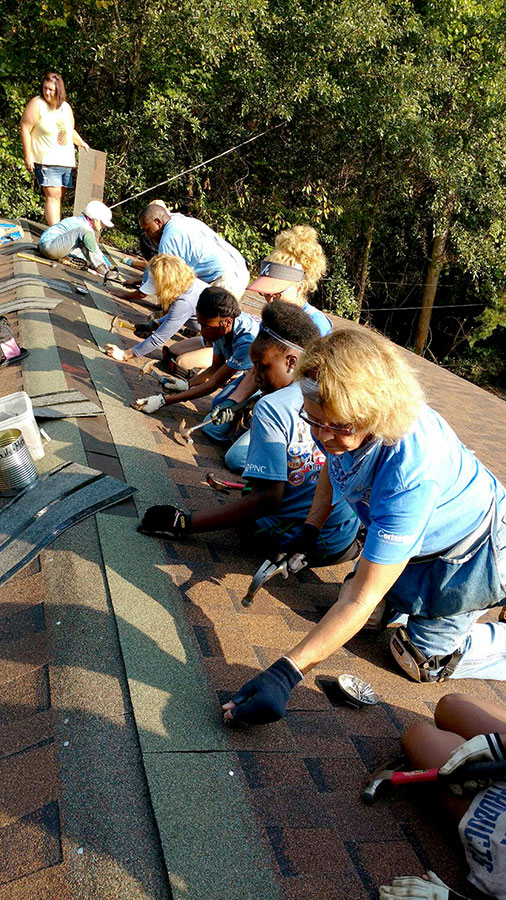 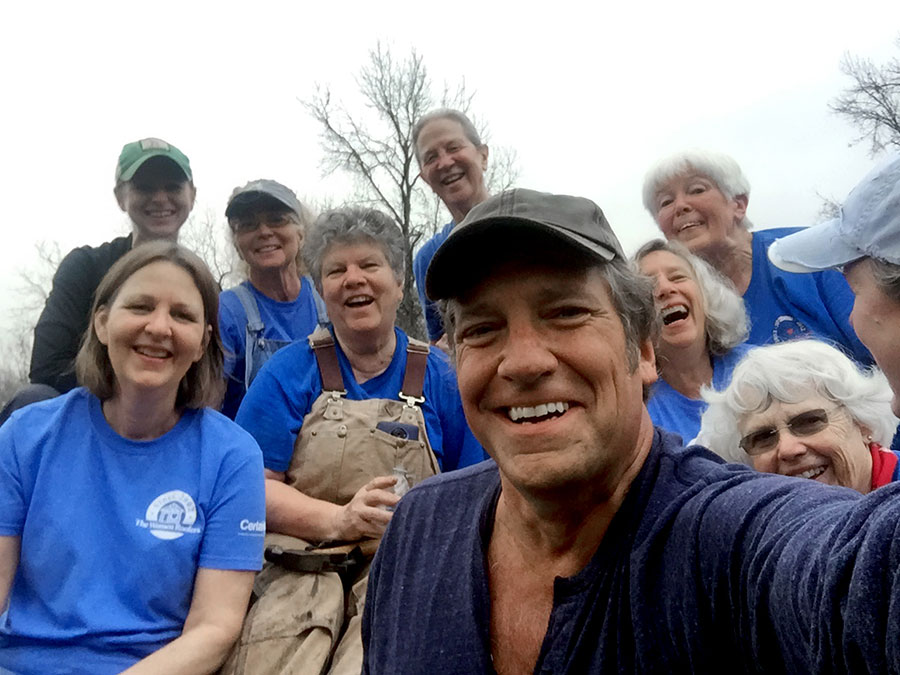 The Women Roofers gained national and international recognition a few years ago, appearing on CBS Evening News, NBC Nightly News and in People magazine. In 2018, they were featured on “Returning the Favor,” Mike Rowe’s Facebook series that recognizes those doing good in their communities. Watch the 26-minute episode, “All the Shingle Ladies.”

Their story has been told time and time again across the county, state and nation. Although they do not seek recognition, they will admit it is pretty cool sitting on a rooftop with Mike Rowe.

What’s more, before leaving the county, Rowe presented the Women Roofers with an unexpected surprise: $45,000 in supplies and a vacation to Costa Rica.

They have roofed as far away as Mississippi after Hurricane Katrina, and for Habitat for Humanity affiliates in Arkansas and across North Carolina. But their primary mission is to help those in need at home.

In July, the Women Roofers sponsored the first ever WeBuild! Day Camp for 29 girls in fourth to seventh grade, teaching them how to use simple power tools and experience hands-on building over the course of a week.The camp was facilitated through partnerships with RHP, Lowe’s and Isothermal Community College. According to the camp flyer: “WeBuild! is much more than hammering and sawing … The girls were introduced to skills they will carry with them the rest of their lives.”

The women support each other on and off the roof.

Roofers have shared celebrations of grandchildren, marriages, retirements and the pain of divorce and losing a spouse.

“There are so many joys from roofing,” Lori Herrick says. “The first thing that comes to mind is knowing at the end of a roofing project you have made someone’s life better that day. The joy the group of Women Roofers bring to my life is a gift I can never repay. The group brings so much encouragement, passion for the work and love to each other, as well as the recipients of our work. I consider it an honor to work with this group of women and hope we can continue helping others one roof at a time.” 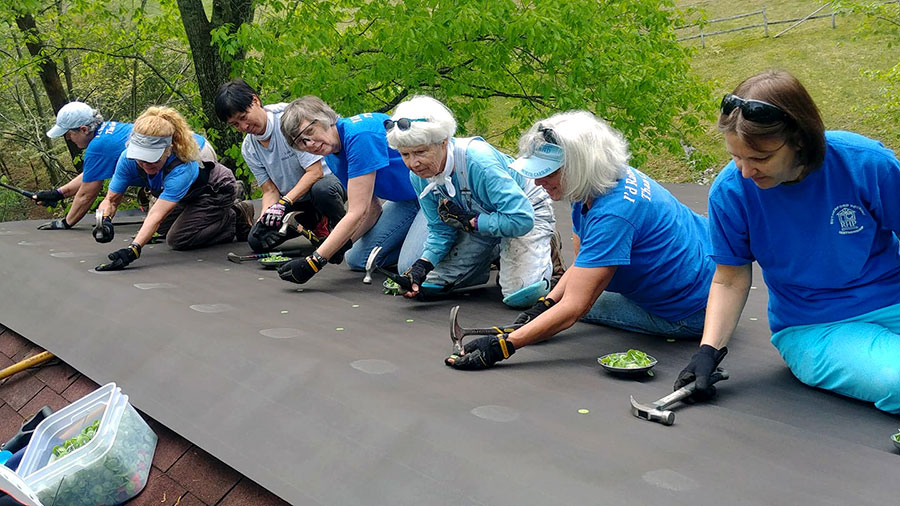 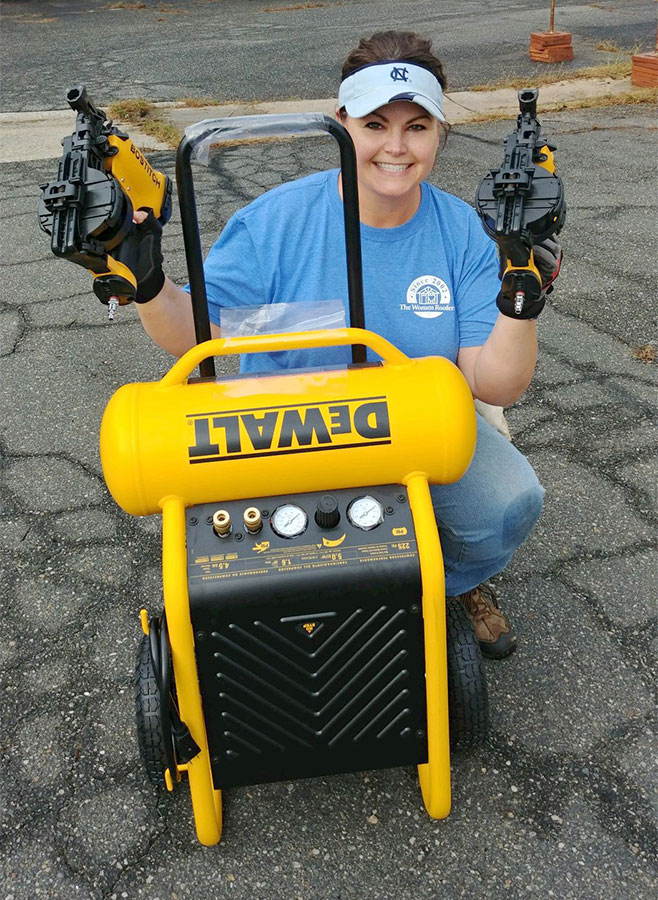 There are also members of the group who stay on the ground, of course, where other important work is needed. Janet Jolly is such a roofer. She believes she is fortunate to be doing something for a homeowner in need.

“Often I speak with the owner, and I have even worked with a few homeowners cleaning up around their homes,” she says.

A ground crew keeps track of water breaks, snacks, first aid, weather, time (including when the sun will set), as well as handing up needed or dropped hammers. Janet picks up felt paper pieces, shingles, recycling nails, plastic bottles and shingle wrappers, and cleans off and folds up the ground tarps.

“While I miss all the talk on the roof, I am still outside and doing something for a homeowner,” Janet says.

Roofers agree their work is being able to reach out to others in their hours of need.

Jane Bell sums it up: “I cannot imagine what it must feel like to go to bed at night fearful that it might rain and damage your home and belongings. The gratitude from the homeowners is reward enough, but the icing on the cake is working alongside some of the finest women I have ever met in my life. It is an absolute honor and privilege to be a Woman Roofer, and I’ll continue as long as this body is able.”And “Bossman” Billy says the work of the Women Roofers won’t be ending any time soon.

“The need will always be there,” he says.

Jean Gordon is a former editor and reporter for The Daily Courier. She lives in Forest City and spent more than 48 years in the news business in her home county, Rutherford.