The Electric Car has Arrived

It runs on fuel that is cheaper, cleaner and made in the USA 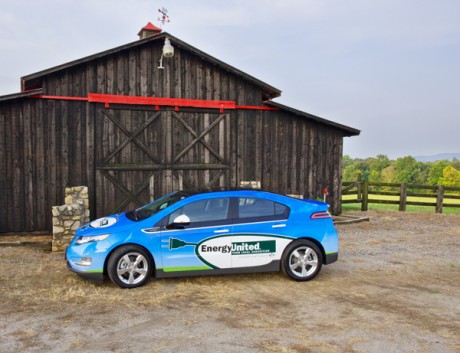 The EnergyUnited plug-in electric Chevy Volt recently made a trip to the barn of co-op members Clyde and Marlene Hendren in Taylorsville. A visible symbol of EnergyUnited’s innovation, the Volt joined the co-op’s “clean fleet” of hybrid‑electric and propa

Imagine never again pulling into a gas station to refuel your car. Instead, when you reach your destination — at work, at home, at a shopping mall — you plug your car into an electric outlet to charge it.

"This is not the future. This is viable now," said Jeff Barghout, director of transportation initiatives at Raleigh's Advanced Energy. Previously instrumental in electric vehicle development at both DaimlerChrysler and General Motors, Barghout recently gave an update on plug-in electric vehicles (PEV) for North Carolina's electric co-op representatives.

As PEVs continue to emerge in the U.S. market, not just drivers will be changing behavior. Electricity providers will as well. And so will anyone who manages municipalities, office buildings and commercial establishments. They all will become familiar with the logistics of powering electric vehicles.

A 2010 Touchstone Energy "Cooperative Difference" survey found that 10 percent of North Carolina electric cooperative members "definitely" would consider buying an electric vehicle, and 32 percent "probably" would. The findings are similar to interest nationwide among co-op members, according to the survey. "If 10 percent of North Carolina's electric cooperative residential membership purchased an electric vehicle," the survey report says, "cooperatives would need to supply electricity and recharging equipment to approximately 80,000 to 100,000 vehicles."

Electric cars in the mainstream

Nearly all vehicle manufacturers today are preparing to introduce PEVs. The two most common ones now are the General Motors Chevy Volt and the Nissan Leaf. About 3,000 of each are on the road. The $41,000 Chevy Volt can run 30 to 40 miles on its electric battery until it requires either a recharge or power from its back-up gasoline engine (taking it another 340 miles). The $32,000 Nissan Leaf can run 70 to 140 miles before it needs recharging. Factoring in today's $7,500 energy tax credits, these cars cost about the same to buy new as a similarly sized gasoline car. Over five years ownership, Barghout said, it's estimated that the PEV will cost less to own than a Toyota Corolla, given that it won't require as much energy and its maintenance costs are lower to begin with.

"And," Barghout added, "the fuel is cheaper, cleaner and made in the U.S.A."

Because PEVs do not send emissions out a tailpipe, they could reduce the nation's greenhouse gas emissions by 25 to 30 percent, according to U.S. Department of Energy estimates, whose calculations included using coal to fuel electricity generation plants. While there are some 250 million vehicles on U.S. roads today, DOE estimates 1.5 million will be PEVs in 2015. 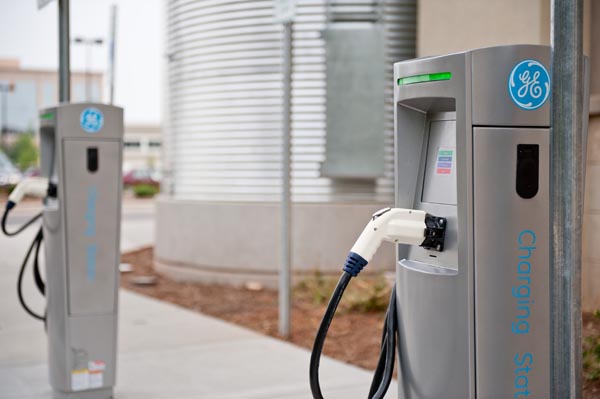 From electric to gas and back to electric

Why have we not had plug-in electric cars before now? Actually, we did. An electric car preceded the Ford Motel T by about 70 years. When the 1908 Model T came out, there were some 6,000 electric cars already in motion in the U.S. But Ford's newly introduced gasoline-powered car was far less expensive to make and buy, so that by 1920 it had taken over the market.

We saw renewed interest in electric cars in the 1960s and 1970s when new and stricter safety and emissions standards ushered in cleaner, more fuel-efficient vehicles. In the 1990s, as "hybrid" vehicles were introduced (powered by gasoline while charging an electric battery pack), all-electric vehicles still cost about $200,000 to buy. Now, with nearly universal support from American industry, government and consumers, the PEV has entered the mainstream.

Today's PEVs use electricity at the equivalent of 50 to 75 cents per gallon of gasoline for conventional vehicles. And that cost is expected to decline as battery prices do. The batteries are rechargeable lithium ion, the same technology that powers laptop computers and cell phones. And even after 10 years of vehicle use, they can serve as standalone power producers or they can be recycled.

While they are somewhat smaller than today's average family car, the PEVs perform like normal cars, except more quietly. The Volt can do 0 to 60 mph in 8.53 seconds, while the Leaf does it in 7 seconds. They both can reach 100 mph. Tesla Motors of California has a $100,000 2-door Roadster that goes from 0 to 60 mph in 3 seconds, and a $60,000 4-door that does it in 5.6 seconds and is available with a battery pack that can take it 300 miles before a charge.

The vehicles have navigation systems that calculate your travel range and are capable of locating the nearest charging station. Their cabin designs are more rigid than standard vehicles, mainly to protect the battery packs.

What about the electricity?

While PEVs can be plugged into your household power via a standard outlet, charging time could be 10 hours. More convenient is the industry-standard "Level 2" charging stations available from car dealers. They are 240-volt chargers that can be placed in a garage or outdoors and will fully charge a PEV in two to four hours.

While most charging will take place at home, public charging stations also are popping up in major markets. At a recent national Plug-In 2011 conference held in Raleigh, GE Energy Industrial Solutions announced the impending installation of 10 stations in Raleigh, Cary and Mebane (location of the manufacturing plant). Others are in Asheville and Charlotte. These eventually will be located at work places, parking decks, shopping malls and on street corners.

Auto dealers typically guide buyers on all aspects of driving and charging these vehicles.

Today's vehicles draw about 700 watts of electricity to charge. Electric co-ops and other utilities already are gearing up for the extra load that PEVs will require.

"Each PEV is like putting another house on the grid," Barghout said. He mentioned a study by Oak Ridge National Laboratory that estimated if all PEVs are charged during peak-demand hours, the nation will need to build lots of new power plants. But if the plug-in charging time is "controlled" for off-peak hours (late night, for example), the need for new generation facilities will be next to none. Some control methods include timers at the charging station, lower rates for consumers who charge during off-peak hours, and various "smart grid" controls.

Is there an electric vehicle in your future?

If you are interested in buying one of these vehicles, your electric cooperative needs to know. Your cooperative can help you determine if the existing wiring and transformers that serve your home or business are capable of handling the extra power requirements your battery charging will demand.