The Mill Town That Never Closed

How Cooleemee retained the heritage that defined its character

The Textile Heritage Center in the town of Cooleemee (pronounced COO-luh-mee) has humble roots. It began as just a bulletin board behind plexiglass at the post office. Today it fills a historic two-story house that was built for a general manager of the local cotton mill in 1923. The mill was erected on the banks of the South Yadkin River in Davie County at the turn of the 20th century and operated until 1969. In its heyday, in the 1940s, some 1,800 workers heeded its whistle. Many of those workers and their descendents still live in Cooleemee, a town of 960 people, and their memories have lent authenticity to a sweeping, homegrown history project.

Shortly after word got out in 1989 that the Cooleemee Historical Association wanted to record old-timers' stories about mill life, the tape was rolling. Men and women, mostly from the World War II generation, shared not only their stories of life on the work floor, but also what it was like living within the confines of a town built for one purpose: to turn cotton into cloth. Some of what they said surprised the interviewers. Rather than lengthy tales of deprivation, Cooleemee's former doffers, carders, spinners and weavers described working in a tough environment while having a measure of autonomy that made them feel valued. They also recalled a tight-knit community where neighbors were more than co-workers — they were like family.

The town, owned by the mill, was provincial and cosmopolitan at the same time. On the one hand, mill families could maintain many of the traditions of self-sufficiency they'd had as farmers. Their homes sat on lots big enough for a garden, a few chickens and a smokehouse. On the other hand, they had some city-style amenities, like a department store, drug store, cafe, library and even a movie theater in the town square. Millworkers had their own traveling concert band, and the Cooleemee Cools had their own lighted baseball field and grandstand.

The duality in old Cooleemee created what Lynn Rumley calls "an industrial folk culture." Rumley is the director of the Textile Heritage Center and the town's mayor. She is a passionate curator of Cooleemee history and the southern cotton mill culture at large. Rumley was usually the interviewer with whom Cooleemee's elders shared their recollections. To date, the center has amassed 120 hours of video from 30 subjects. The center has also archived thousands of pages of written histories from 151 mill families.

The community stayed together

Some of the personal stories have illuminated the somewhat unique story of labor relations in Cooleemee. Given the comparatively small foothold of organized labor in the South, it may surprise a lot of people to learn that the Cooleemee mill was unionized, though it came about atypically. When 65,000 North Carolina textile workers walked off their jobs during the industry-wide General Textile Strike of 1934, the Cooleemee mill hands were not among them. They believed that company officials promised they would not thrust upon them the new, increasingly common practice of "scientific management," in which workloads were doubled and tripled and mill workers toiled to the tick of the stopwatch. The so-called "industry engineers" even timed bathroom visits. The general strike of 1934 was an abject failure in the South, with organizers unable to enlist enough members to successfully bargain on the workers' behalf. 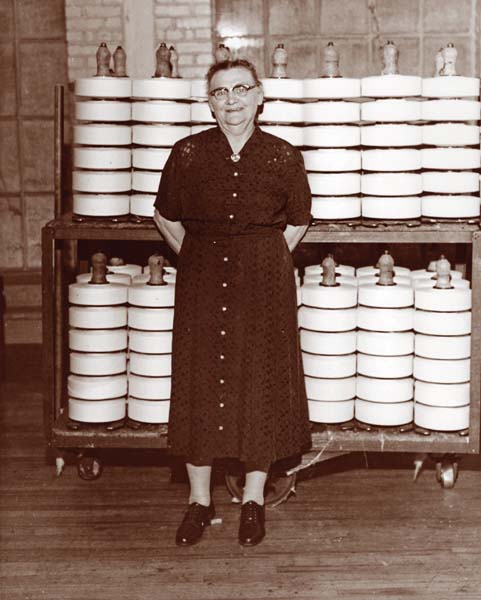 Minnie Grimes on the job in the mill.

In Cooleemee, company higher-ups eventually brought in "time study managers," prodding workers to operate more machines in less time. "In place of them sticking with us, they really stuck it to us," said John Henry Nail, who was in his 80s when historians interviewed him. "(They) brought the checkers in here and put more work on us." For decades, mill hands had worked hard in exchange for not only a paycheck, but some unofficial fringe benefits — such as time off to kill hogs, go hunting, tend to a sick family member or even take an extended break from the work floor when they were caught up.

"My father was the overseer in the spinning room," said former mill hand Fred Pierce. "When they doffed all the frames they'd just go up the river and take a swim, you know, until the bobbins got full again, and then he'd go out and whistle or holler and they'd all come back in and start doffing again." Cooleemee workers wouldn't stand for the loss of independence. In 1937, they unionized, with 90 percent of the workers paying dues.

Cooleemee's former mill workers and their families have contributed way more than words to the story of their past. As news of the history project spread, people shook out their attics, dug into cedar chests, and pilfered scrapbooks and photo albums. More than 3,000 old photographs have been donated to the center and digitized for its archives. The Mill Village Museum, housed on the center's first floor, is filled with artifacts that document the routines of work and play, school, worship and home life. There's also an auxiliary building, the Mill House Museum, an original mill house furnished with donated items — including a wood stove, beds, quilts, tables, armchairs and rockers, enameled bowls, cast iron pots and pans, butter churns and canning jars — everything a typical mill family would have used in the early 1930s. Almost all the artifacts were collected locally.

Cooleemee's cotton mill closed in 1967, putting its last 750 workers on the street. A closing often spells the death of a mill town, but most people stayed here, even if they had to drive out of town to work, says Rumley. The Cooleemee Historical Association did a survey in 1996 and found that 75 percent of people living in the original mill houses were either native Cooleemeans or had Cooleemee roots, she says. "I think Cooleemee is one of the few mill towns in the South that have gone through a closing and remained intact in terms of a community." The mill building and some 330 original houses still stand, and now there are enough memories to fill them.

To learn more about the Textile Heritage Center or to become a supporting member of the Order of the Bobbin and Shuttle, visit www.textileheritage.org or write to Textile Heritage, P.O. Box 667, Cooleemee, N.C. 27014.