Like it or not, coyotes seem to love it here as much as we do 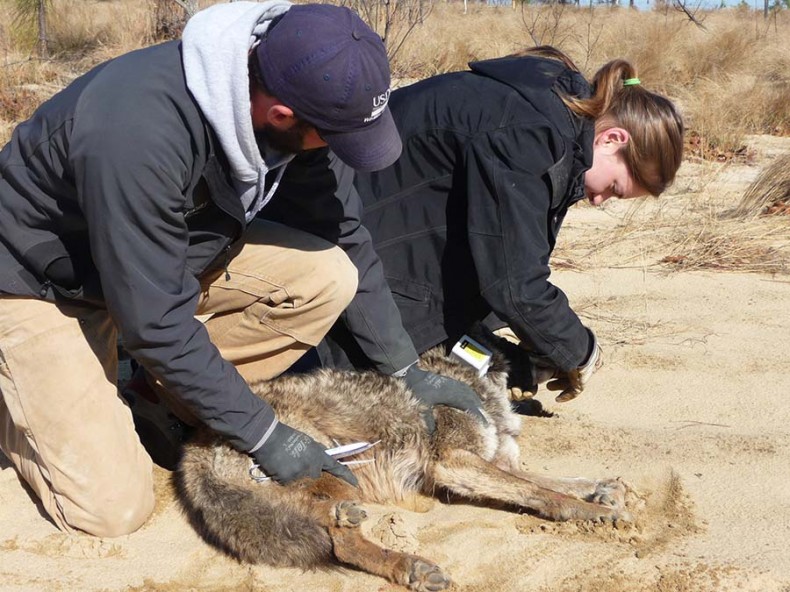 In 2011, NCSU graduate student Morgan Elfelt, right, and Ryan Williamson of USDA Wildlife Services, humanely trapped and radio-collared coyotes at Ft. Bragg. They weighed and measured the coyotes, collected samples, determined sex and age, and released them. The tracking collars revealed a surprising fact about these fascinating animals: coyotes roam far and wide, sometimes for hundreds of miles.

If you live in the country like we do, it’s not uncommon to hear the shrill cry of a soaring hawk, the cackle of a chatty crow, or the chip-chipping of an angry squirrel. It’s also becoming more common to pick up the yip-howl of a coyote or two at dawn or when day fades to dusk.

Whether we like it or not, coyotes seem to love North Carolina as much as we do. While some were brought into the state by fox hunters in the 1980s, natural ingress was the primary source. Coyotes are now well established in all 100 counties.

“For years, people accused us of releasing coyotes,” said Ken Knight, Piedmont Region supervisor of the North Carolina Wildlife Resources Commission. “But that was certainly not the case. If you look at where North Carolina is geographically, there were coyotes to the south of us, to the west of us, to the north of us, and we were just one of the last places that they got to.

“The blame is on the coyotes. They got here on their own,” he says.

By nature, coyotes range far and wide. An NCSU study at Ft. Bragg, conducted by Morgan Elfelt, now a wildlife research assistant at Natural Resources Research Institute, found that some coyotes captured and fitted with tracking collars roamed a surprising 400 miles or more.

“And while we had three that roamed, we also had some that never left the base. To me, that’s a fascinating story that our collars are telling us,” says Elfelt.

In other words, the coyote you spot trotting across your property or raiding your trash may be a homebody or just passing through.

Coyotes live like hobos, simply going where food and opportunities are plentiful, and easily adapt to cities and suburbs. They really don’t care what they eat, and dine on grasshoppers, clover, fruit, garden vegetables, and lots of rabbits, mice and squirrels. They also kill and eat small house pets, young farm animals and deer, and that has given the coyote an especially bad rap.

It’s hard to imagine a story in which Little Red Riding Hood is approached in the woods by a coyote, but coyotes are taking on the role that wolves once played in balancing our ecosystem.

Knight added that even before we had coyotes in North Carolina, small livestock and deer were found dead, and the culprit was often wild dogs or pet dogs running loose. Today, most people just blame the coyotes, even though dogs are still often to blame.

Hunters aren’t fond of them because they’re under the impression that they’re causing deer populations to decline, and there’s certainly some research to back that belief.

Colter Chitwood, Ph.D. post-doctoral fellow at the Fisheries and Wildlife Sciences Department of the University of Missouri in Columbia, conducted and published research on coyotes and how they impact deer populations. Of the 28 deer observed in the Ft. Bragg study, four pregnant deer were found dead with signs consistent with coyote attack behavior.

“It’s not unusual for coyotes to kill heavily pregnant deer and newborn or unborn fawns when the does are heavy, slow and at their most vulnerable,” says Chitwood. “What we need to recognize here is that because this was occurring at Ft. Bragg, where the deer population is at a fairly low density, it does appear that coyotes can affect the deer population.”

Adds Knight: “It varies greatly on the concentration of the deer, the deer habitat, and how much cover there is where the does go to have their fawns. They’re good in that they do kill some deer, but hunters and vehicles kill many more deer than coyotes. In some cases, they’re certainly helping to control the population in places where people don’t hunt and where coyotes and cars are about the only way the deer are getting a little bit of control.”

Coyotes sometimes range hundreds of acres as their territory, and have been tracked traveling hundreds of miles. Because coyotes are extremely transient, managing them is not exactly a black and white or local issue. The coyote you hear or see today may not be the same one you see two weeks from now.

The best way to manage a houseguest who has overstayed his welcome is to remove the temptation to stay. Removing a coyote’s food sources should be the first thing you do.

“Coyotes will become bold if there’s any food at all for the taking,” says Knight. “Fallen fruit, pet food left outside, and unsecured trash will draw them. Of course, those are the same things that attract rats, raccoons, skunks and bears, so it’s just common sense to keep things out of the reach of unwelcome wildlife.”

Other things homeowners can do include keeping brushy areas cut back, installing coyote-proof fencing for unsupervised pets, yelling and making noise to scare them away, and educating your neighbors about the pitfalls of feeding coyotes. While they’re not known to be a risk to humans unless cornered or sick, the few coyote bites reported each year are usually related to coyotes intentionally fed by humans.

“Certain breeds of dogs do a good job of protecting livestock,” says Knight, who says that some people successfully use guard animals such as donkeys, mules or llamas.

If you already have a problem with a coyote, the North Carolina Wildlife Resources Commission recommends starting with non-lethal methods. The next step would be to search its website, ncwildlife.org, under “Coexisting with Wildlife.” The information under this tab can help you find a wildlife damage control agent, a private individual who charges for his or her services, or a licensed trapper.

“In North Carolina, it is legal to hunt coyotes any time, day or night,” says Knight. “You can also use lights and electronic callers, which you can’t use for animals such as foxes or bobcats.” The only exceptions are Dare, Hyde, Beaufort, Tyrrell and Washington counties where hunting coyotes is strictly regulated due to an experimental red wolf reintroduction project. The Registration Digest of the North Carolina Wildlife Resources Commission has the specifics, including how to report.

If you encounter a coyote or any wild animal showing abnormal behavior such as unnatural tameness or unprovoked aggression, call your local animal control service or law enforcement agency and keep yourself and your pets well away until help arrives.

Coyotes may look a little scraggly, and they’re sometimes a nuisance, but they play their part in keeping our ecosystem in balance. We can learn to coexist. Like them or loathe them, coyotes are in North Carolina to stay.