A Living Museum, A Lasting Legacy at Hart Square 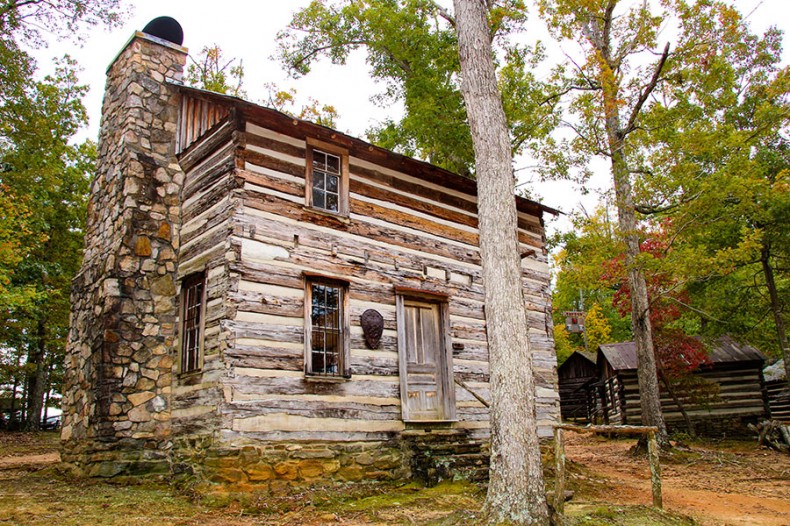 There are more than 100 log structures at Hart Square.

When you travel down a road called Hope, in Catawba County, and turn onto a small lane near a mailbox topped with a bright red heart inside a black square, you are on your way to being transported to another century, to a place in Rutherford EMC’s service territory known as Hart Square Village.

The clang of the blacksmith’s shop rings out as tools are forged from iron on a hot anvil. Melodies of a string band float through the air. Tendrils of smoke curl skyward from the fire that’s been built under a black kettle for soap making. Sue Helmken, with the Piedmont Fiber Guild, is chatting with a crowd about the row of pots she is tending. It’s a lesson on how pioneers used different plant material — rosemary, onion skins, beets, walnut hulls — to dye fibers different colors. 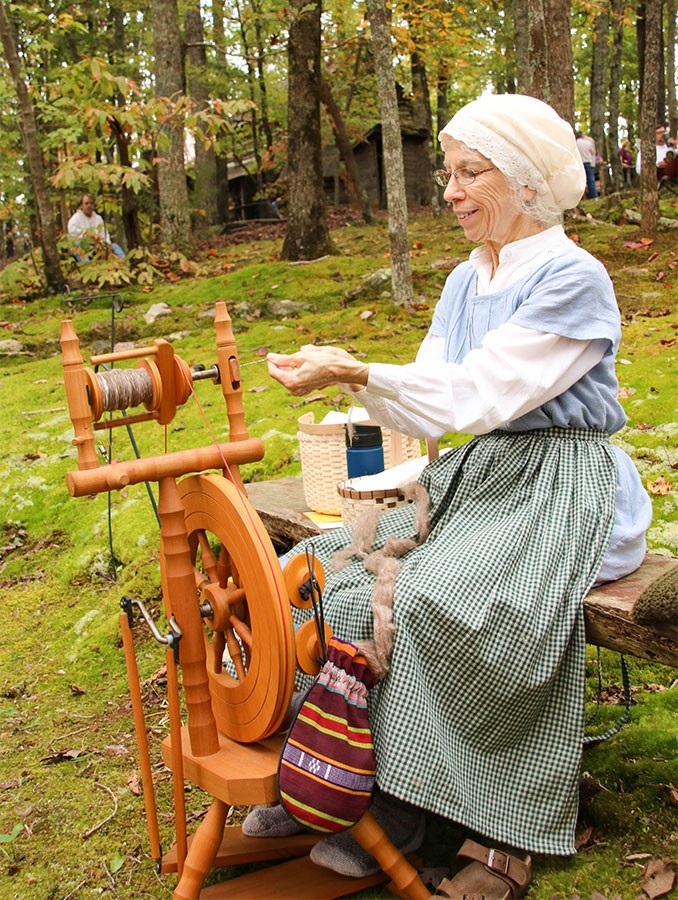 Linda Erickson of Davidson, member of the Piedmont Fiber Guild

At the Propst House, which dates to 1792, Carol Robinson is demonstrating how to spin wool on a large spinning wheel and Linda Canipe is settled into a corner of the front porch. She’s dressed in a calico dress and bonnet and hard at work using a large wooden utensil — an early version of a mandoline — to slice a large head of cabbage to make sauerkraut. It’s been her job for 31 of the 34 years that Hart Square has opened on the fourth Saturday in October for its fall festival.

Walk through the village and nearly each of the 100 structures features one or more of the nearly 200 artisans and tradespeople, most in period costumes, bustling with demonstrations of the resourcefulness and ingenuity of early American life. Potters, broom makers, tinsmiths, bakers using a beehive oven, woodworkers, bookbinders, herbalists, surveyors, hide tanners—it all lends to the aura of stepping back in time with guests becoming part of the pioneer experience.

Hart Square is billed as the world’s largest collection of 18th and 19th century structures. It showcases elements of life gone by in nearly every building, from the jailhouse, to individual homes, to the chapels, to the schoolhouse, a general store, the cotton gin and more.

“The beds are made, the table is set, the corner cupboard filled, all the tools hanging,” says volunteer Powell Sigmon. “It’s as if the pioneers who inhabited it are gone for the day.” 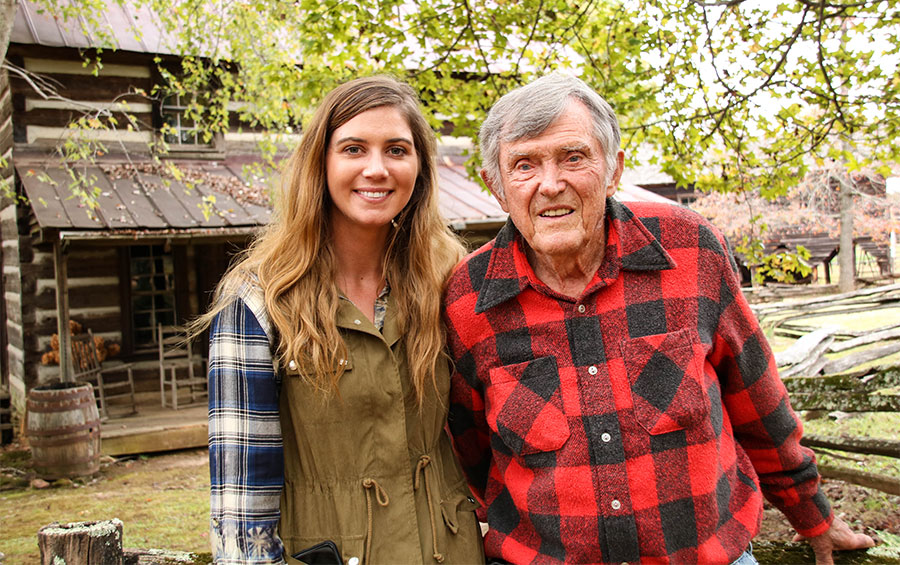 The late Dr. Bob Hart and his granddaughter, Rebecca Hart

While Hart Square is no doubt impressive, it’s the story and the person behind it that amazes.

“It all started by accident,” said the late Dr. Bob Hart [interviewed for this article last fall], who was a family physician for 50 years in Hickory. “You can do a lot in 50 years.”

A conservationist at heart, back in 1967 Dr. Hart purchased land with the idea of establishing a refuge for wildlife and a respite from his busy medical practice. About 20 years later, shortly after he won the Wildlife Conservationist of the Year, he said a friend told him about an old log cabin that would look good on his property.

“So we moved it and put it by one of the ponds.” Before long, he’d added a well and outhouse, then the log barn that went with the house. “Then you have to have something to put in it,” he added.

Others began letting the doctor know about log structures in the Catawba River Valley region. He took to the sky in his airplane to spot them.

“It was a domino effect,” he said.

Now, more than 100 structures are packed with authentic-to-the-era items. The impressive collection represents the life of people’s ancestors and a part of North Carolina history. While it certainly gives a glimpse of life from another era, it’s also a log structure rescue project; without Hart Square many of these structures would already be lost to dilapidation or demolishment. Each piece of each structure was dismantled, numbered, transported and then rebuilt by Dr. Hart and friends.

Dr. Hart passed away in March, although his legacy continues through the Hart Square Foundation, his family and countless friends and volunteers. 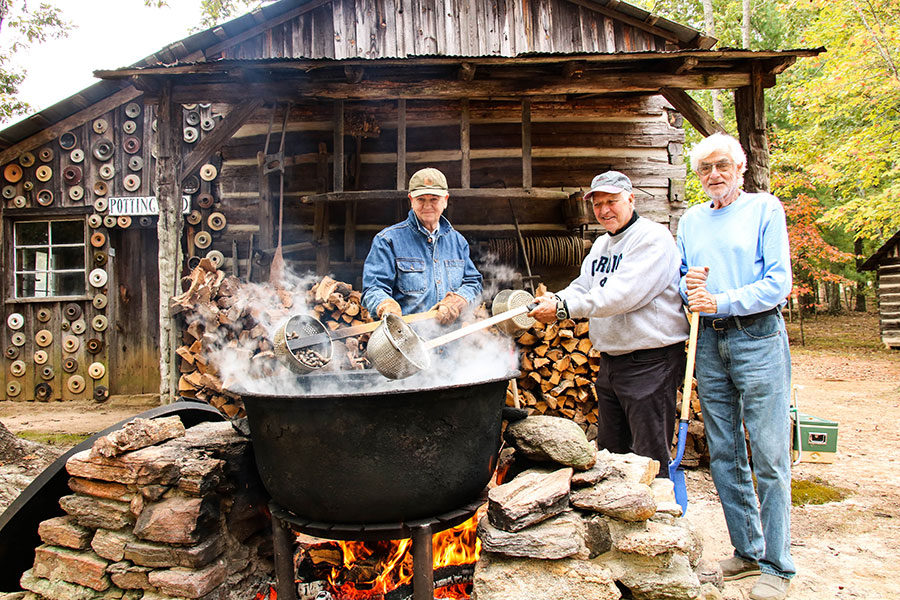 While Hart Square Village is like stepping back in time, it’s clear that the place is about more than old log homes. It’s about people. The world’s largest collection of log structures is indeed impressive, but it’s the stories behind them and the lessons they hold that are remarkable.

The history, the detail, and a commitment to the authentic nature of a structure were important to Dr. Hart and his wife, Becky, and remain so with the Hart Square Foundation. His interest connecting generations was paramount.

“I’m trying to educate this younger generation so they appreciate what their great grandparents and all have done,” Dr. Hart said.

On the Friday before the 2019 festival, the village teemed with students who were treated to glimpses of life in an 18th and 19th century village. Laura Warren, a teacher at nearby Startown Elementary, brought her students.

“We wanted to come here because of the local heritage,” Laura says. “Just being able to have a living museum and being able to walk through it and see real examples, for things to be tangible, to put images with facts. It brings North Carolina history alive, not only for those who study it in the fourth grade across the state but for others. This works for any grade level.”

“There is nothing like this anywhere,” says Powell, who, with his wife Virginia, contributed funds to help build the new education center. “I have been around the world but I’ve never seen a place like this. I think it is a national treasure.” 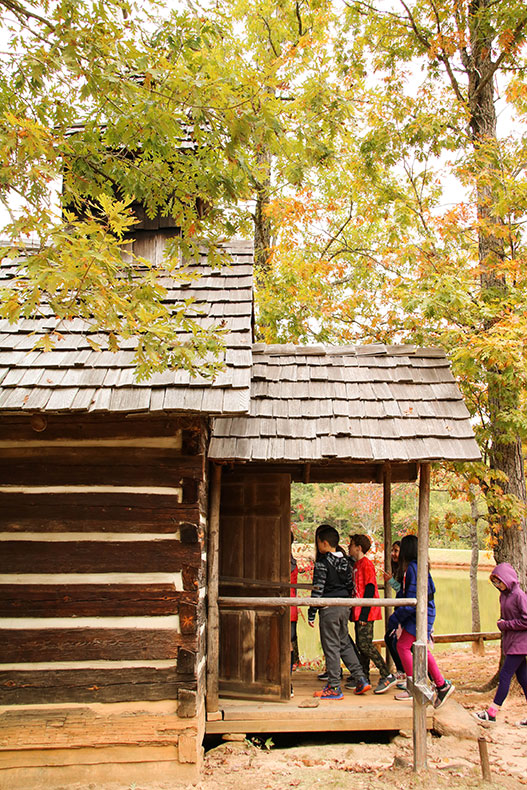 Looking toward the future

The Hart Square Foundation is looking toward the future. At the helm of the foundation is Dr. Hart’s granddaughter, Rebecca Hart, who serves as its executive director. Just as her grandfather jumped into collecting and curating log structures that became an entire village, Rebecca and her staff are looking to tap the pioneering spirit of North Carolina’s heritage to offer creative ways to educate and inspire current and future generations. They hosted more than 3,500 school children last year for educational field trips packed with hands-on activities such as blacksmithing, apple cider making, creating cornhusk angels and learning about old-time music.

The education center, designed to be the gateway to Hart Square Village, opened in early 2020 and is used to facilitate year-round educational programming, and host corporate retreats and musical performances, with the hopes to include a craft school to share the trades and crafts of the time period.

To Rebecca, it’s all part of the ever-growing circle of people and resources that results from a labor of love.

“This is a great place for people to learn. It’s a living, learning library,” she says. “There is something for everyone to connect to at Hart Square, whether you are an outdoor enthusiast, history lover or artist.”