Extending the Harvest for the Hungry

Robert Brown pulls his small red pickup truck onto David and Mary Jo Ritchie’s farm, land that is teeming with several rows of muscadine vines. Brown has a jumbled pile of cardboard boxes in the back of his truck to share. He is one of many volunteer gleaners that the farm is welcoming on a late fall morning to pick the vines at the end of the season. The food will go to the hungry.

“Our nation doesn’t know enough about what they could do to help others,” Brown says as he reaches into the vines to pull plump muscadine grapes, dropping them into a box. He cites the age-old story from the Book of Ruth in the Bible. Hebrew farmers, such as Boaz, were commanded to leave a portion of their crops unharvested to allow the poor to come into their fields to pick or glean what was left. 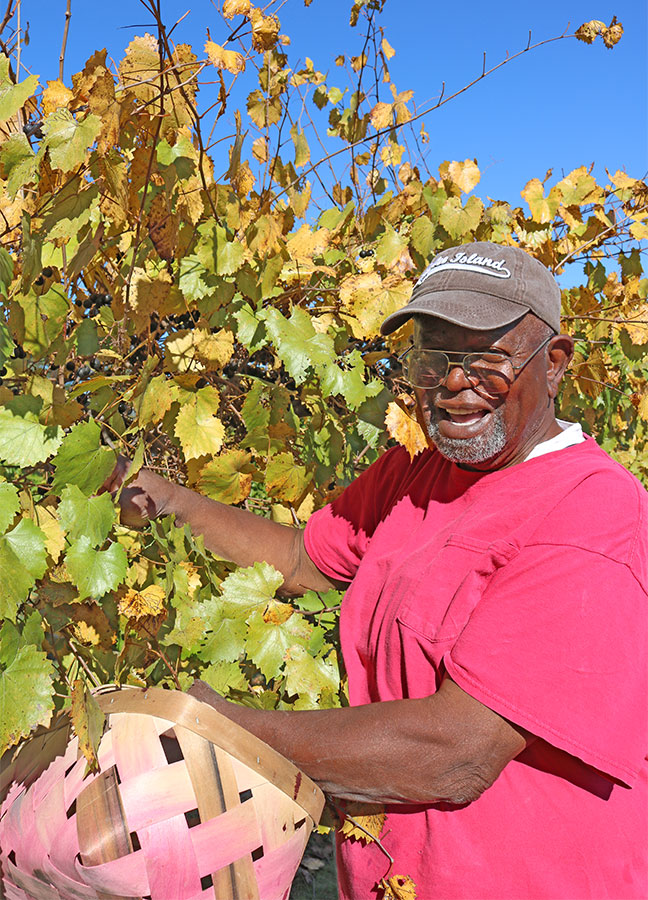 While gleaning dates back millennia, it’s a new and worthwhile experience for many.

“It’s a joy to see someone else get things they can’t afford,” says Brown. While Brown picks produce for others, he shares that it fulfilled a personal need as well. “I was retiring and didn’t have anything else to do. This is something I could do to contribute.”

With the farm season in full swing from now through the fall, gleaners across the state converge on participating farms, picking and collecting produce that will feed others and keep farm waste out of the fields. The effort is organized by the Society of St. Andrew, a faith-based, hunger relief nonprofit that works throughout North Carolina and in several other states.

Jean Siers, Charlotte Regional Coordinator, Society of St. Andrew, keeps in close touch with both farmers and volunteers to learn about gleaning opportunities on local farms and to recruit gleaners. She or a trained volunteer supervisor is out on the farm with the gleaners to provide guidance, to help them know where and why they are picking, and to help pick.

Siers and other coordinators develop close relationships with farmers. “We do our very best to respect the farm and the land,” she says. “We are guests on their land and we try to respect their time and their land.”

David Ritchie welcomes Jean Siers, of the Society of St. Andrew, to his farm.

David Ritchie first hosted gleaners in 2016, thanks to an abundant crop, at his small you-pick operation known as Michael’s Muscadines near Mt. Pleasant.

“We’ve met folks, interesting people, from all walks of life,” he says. “Research scientists, physicians, parents with children. Gleaners come out with enthusiasm. You have to have a good heart to give your time.”

Ritchie spends the morning talking with various gleaners, repeating how happy he is that his muscadines will be enjoyed by others.

“What excited me about the gleaners is that they have a written statement that if the food is perishable they will get it into the user’s hands within 24 hours, and that is important. They will be welcomed back again,” he adds.

Meg Spears-Newsome, the North Carolina and South Carolina program coordinator who works with Siers and the seven other part-time coordinators in both states, says that gleaning is a creative solution to two problems: 133 billion pounds of food is wasted in the United States each year, while 42 million Americans are food insecure or hungry. Of these, 13 million are children.

“Every squash saved from the field, every sweet potato dug out of the ground means fewer resources are wasted and someone in need has a healthier meal,” she says. 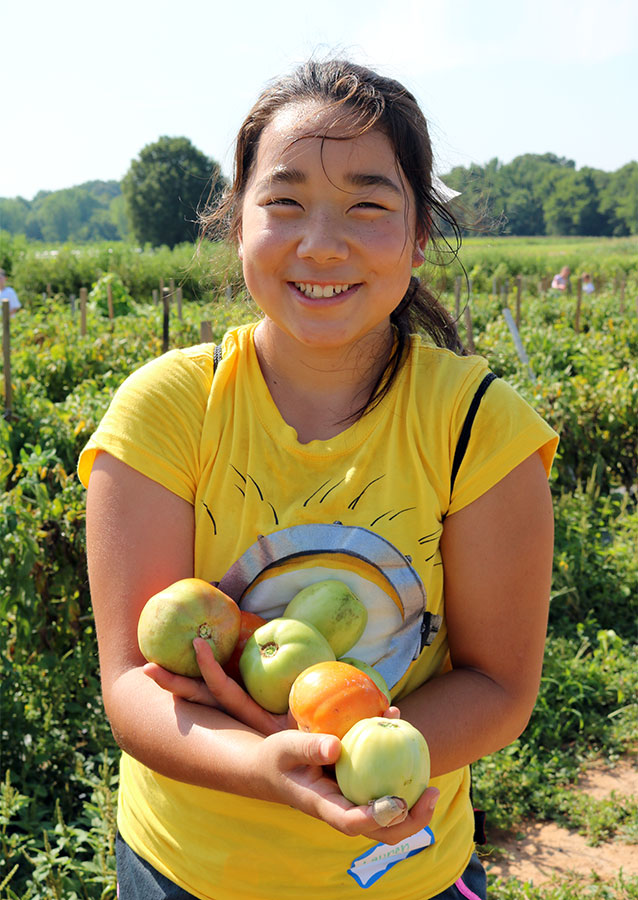 A young gleaner at Barbee Farms

“Our biggest crops are sweet potatoes, white potatoes, corn, watermelons and greens of all types,” says Spears-Newsome. “We do smaller quantities of strawberries, blueberries, various melons, squash, zucchini, cucumbers, bell peppers and jalapeños. All of the food we glean goes to local food pantries, churches, feeding agencies or food banks.” Agencies must agree to provide the food to people who might otherwise not be able to afford it and it must be distributed for free.

Coordinators and volunteer gleaners know that the food they pick may be the only source of fresh fruits and vegetables for many.

“One thing people often don’t realize though, is that most often when we go into a field, that is our only shot at saving all the food left there,” says Spears-Newsome. “If we don’t gather or pick it that day, it will get turned over into the soil and no one will eat it.”

While the harvested food may feed the hungry, the work feeds more than bellies, especially for those out in the fields gleaning.

“Some folks volunteer because we prevent food waste, some are passionate about hunger relief, some want to help the environment, some are motivated by faith,” says Spears-Newsome.

“I love it because it’s one of the most diverse things we do,” Siers adds. “We have all ages, youth groups, people in their 90s, all income levels, black, white. Everyone is in it together.” 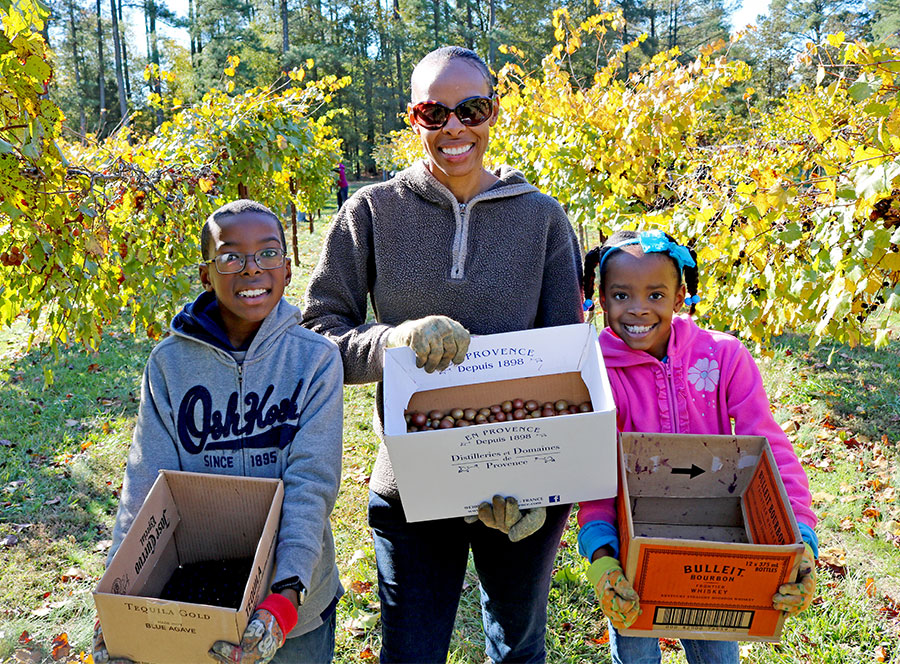 Afrika Mlingo and her children Noah and Hannah at the Ritchie Farm.

Afrika Mlingo, of Concord, likes to take her daughter, Hannah, and son, Noah, on gleaning field trips. “I like to have them do things through the year to give back,” Mlingo says. “I think it’s important to have those values, to serve where they can.”

“Being out in fresh air with nice people doing something for people and bringing blessings to people who need blessings, what is not to like?” asks Roger Coates of Charlotte, who has been gleaning the past 13 years. “I’d like to see people try it. It’s a win, win, win.”

Brent Barbee, of Barbee Farms in Concord, has welcomed gleaners to his farm since 2009. Barbee donates thousands of pounds of produce each year to those in need. “It’s the right thing to do,” he says. “There are way too many hungry people out there. I take great satisfaction in dealing with the gleaners and helping feed people.”

Gleaners are welcomed statewide. Visit the Society of St. Andrew website at endhunger.org and sign up for volunteer information and updates, or email Spears-Newsome at sosanc@endhunger.org. 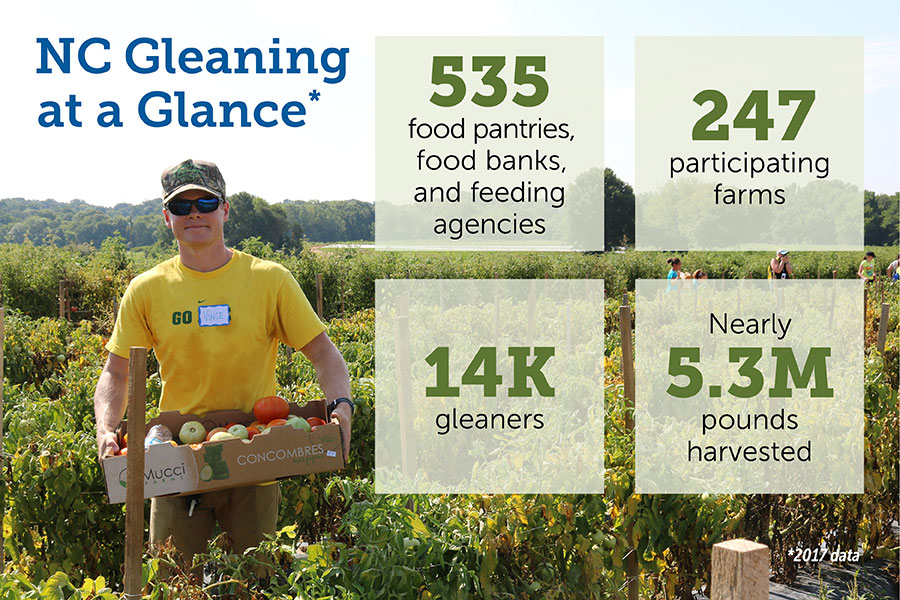