A springtime summit instills knowledge and self-confidence in attendees 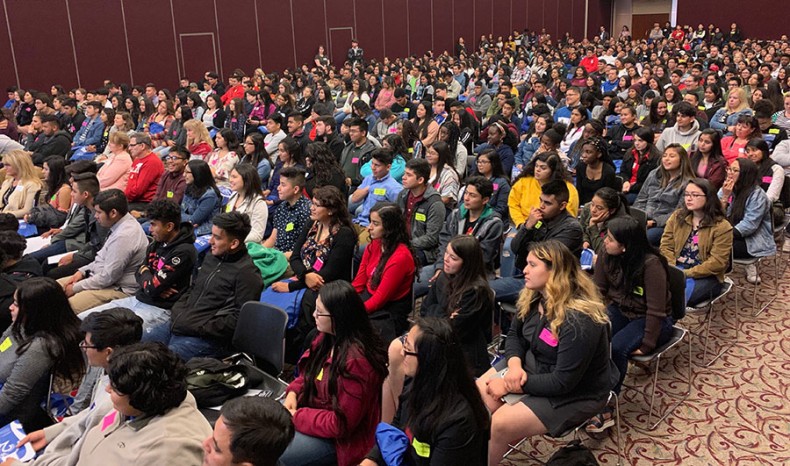 The buses lined up outside of NC State University came from 31 counties, but most were from rural areas — and this was by design. For 20 years, the North Carolina Society of Hispanic Professionals (NCSHP) has made it its mission to promote education among Latino youth, specifically performing outreach in rural communities where Latino students have fewer resources.

Each spring, these efforts culminate in the Hispanic Educational Summit, a daylong event filled with presentations and workshops. More than 650 middle and high school students attended the March 29 event, where the overarching goal was to inspire Latino students to graduate and pursue higher education.

“There aren’t a lot of resources in rural communities for Hispanic students, and if there are, young people don’t know where to find them or where to look,” says NCSHP Director Caroline Oliveira. “That’s why it’s so amazing to see them at this conference.” 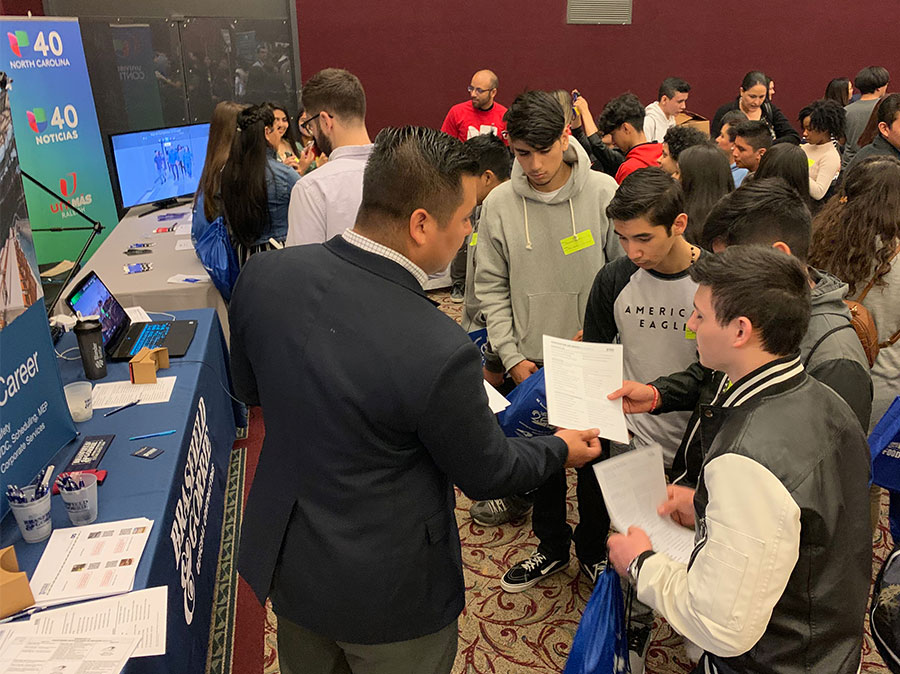 Inside the conference, Latino teens with southern accents speak rapid-fire Spanglish with their classmates as teachers and volunteers usher them into workshops. “Pásale caballero, sin miedo,” one teacher encourages a teenage boy, who awkwardly peers inside a quickly filling classroom.

Caroline is seemingly everywhere during the event, making sure things go smoothly — including the surprise mariachi performance that accompanies the lunch Chick-fil-A donated to the students.

She says her organization handpicks the schools whose students are invited to the yearly event, based on the demographics of their county, whether the school is located in a rural area, and if students from that county have previously attended and benefited from the conference.

“They learn to communicate what they need help with, they network, they ask a lot of questions of the colleges that table at the event,” Caroline explains. “We know these kids go through a lot to access higher education, whether that’s navigating immigration issues or figuring out financial aid as the first person in their family to go to college.”

Presentations cover critical topics for these students, including “The Power of Bilingualism in School and Work” and “Immigration Options for Youth and Their Families.” 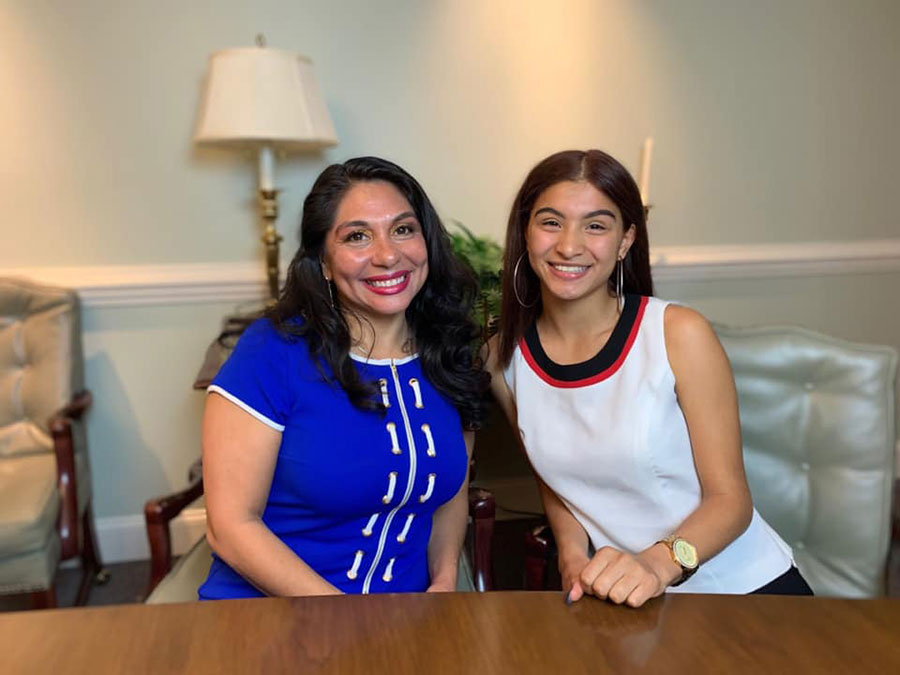 According to Census data estimates, the Hispanic population of nearly 30 of North Carolina’s 100 counties grew by 25 percent or more between 2010 and 2017, a trend that began in the 1980s when Latino immigrants began to migrate to the state in search of economic opportunities. Despite the deep roots these families have developed in the state, education remains tenuous for Latinos, who have the lowest degree attainment rates in North Carolina.

The federal immigration program Deferred Action for Childhood Arrivals (DACA) certainly helps young, undocumented people by allowing them to live and work in the United States without fear of deportation. But North Carolina’s more than 25,000 DACA recipients, considered international students, still have to pay out-of-state tuition to attend college, including community college — on average almost three times the amount as in-state tuition.

Cost was a deterrent for almost all of the students Carolina Country spoke with at the conference, no matter their immigration status. It should come as no surprise that one of the most anticipated events at the conference is the scholarship ceremony, in which NCSHP’s North Carolina Hispanic College Fund awards thousands of dollars to North Carolina graduates to continue their education. This year, more than $61,000 was handed out to prospective college students. 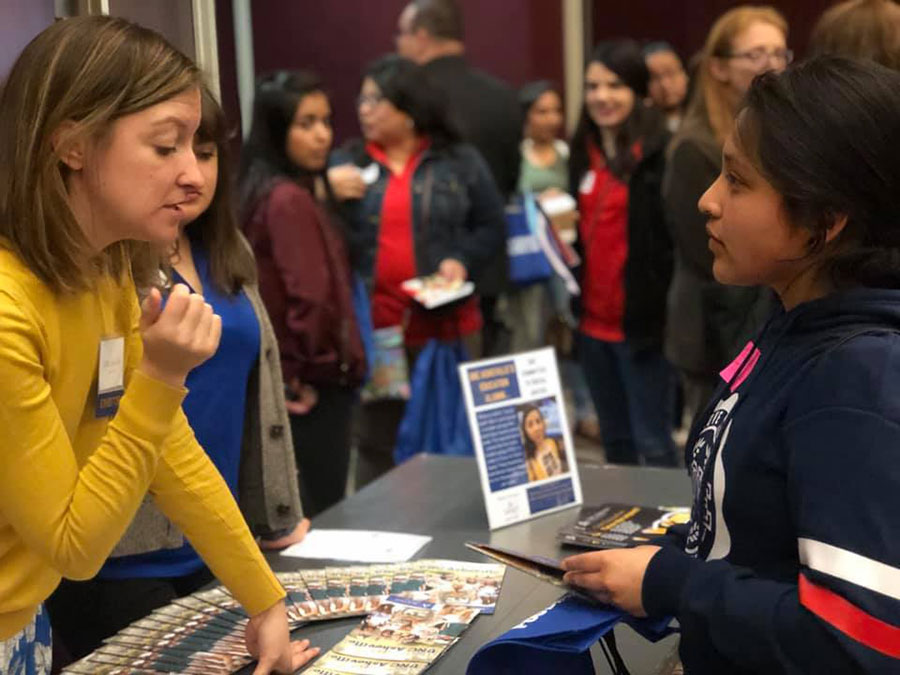 Dalila De Abreu, an English as a Second Language teacher at Monroe Middle School in Monroe, went to the conference with 27 students, including 13-year-old Marlene Patino, who said getting invited to the event felt “intimidating,” but she decided to attend because she cares about her future.

“I want to study medicine at Harvard,” Marlene says. “I worry about how I will do that, and what it will cost me, but I know it’s what I want to do.”

For motivated students like Marlene, there were countless opportunities to get an early glimpse into potential careers, especially for young people interested in STEM fields. Representatives from Cisco, IBM, and other companies participated in panels and recruiting events. There were even workshops geared toward helping high school students get ahead of the college curve, including one led by community college teachers about how many community colleges in the state now enable high school students to work toward obtaining their associate degree through dual enrollment programs.

According to Arisha Guerra, communications and marketing intern for NCSHP, there is no downplaying the difference the Hispanic Educational Summit can make in the life of a young Latino student attending high school in rural North Carolina. It may be the first time they feel at ease being themselves, and for many students, the conference is often the first time they hear that being bilingual and bicultural is an asset. One of Arisha’s most beloved memories of the conference was watching NCSHP’s director lead kids in the chant, “I love who I am!”

“We still have to fight for our education, and this conference sort of helps kick down some of the doors for kids.”

Arisha’s introduction to the organization came six years ago, when she was a high school student attending the conference. The intern, who is Guatemalan and Peruvian, says she’s proud to be Latina, but remembers what it was like to look different from your classmates and come from a different cultural context. Getting through high school can be hard, she explains, and tackling college can seem insurmountable.

“It feels kind of full circle to now be working with NCSHP, and being here today is really fulfilling,” she says. “We [Latinos] still have to fight for our education, and this conference sort of helps kick down some of the doors for kids.”

Visit thencshp.org for more information about the summit and other resources from the North Carolina Society of Hispanic Professionals.