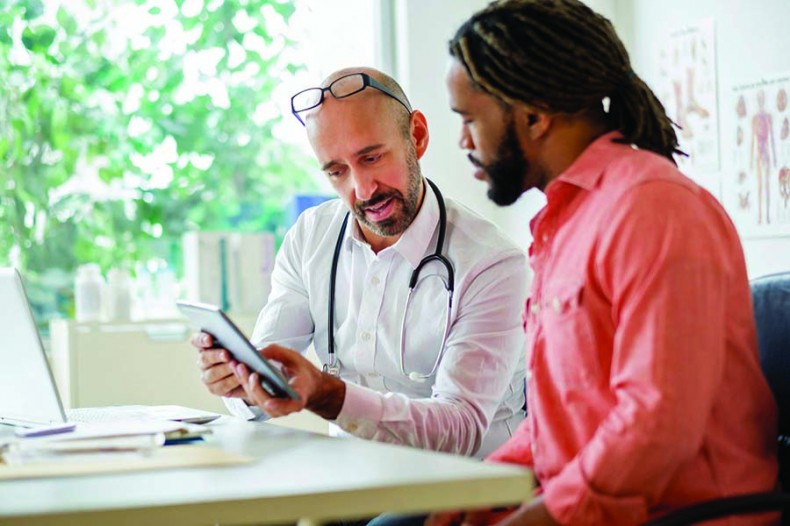 Generally speaking, men don’t have the best track record when it comes to taking care of themselves. It’s safe to say we all know someone who is just plain stubborn about going to the doctor. Even if they exhibit clear symptoms that should be checked out, say wheezing, chronic fatigue (or worse), it can be a challenge to get them to seek medical help.

Thirty-one percent of men wait until they feel extremely sick before seeing a doctor, according to a 2016 survey conducted by Harris Poll on behalf of the American Academy of Family Physicians (AAFP). And 21 percent say they have no reason to go to a doctor when feeling healthy. Men have also reported not being tuned into their health and not feeling comfortable sharing health concerns.

Of course, some men actively participate to improve their health. In fact, as a whole, men have been taking better care of themselves, according to the study. Although the study’s results for men’s health in 2016 are mixed, they lean slightly more positively than negatively.

While encouraging, there’s plenty of room for improvement. By keeping these three points in mind, you can help yourself, or a loved one, lead a longer, healthier life.

Early detection of diseases and taking preventive care to avoid them are very important steps for a guy’s health game plan.

In studies, men often report they feel too busy to go to a doctor. But an hour at the doctor’s office can help a man live years longer. The value of a family physician is that they perform routine checkups and immunizations and can determine a timeline for important initial and ongoing screenings. They can also treat chronic illnesses such as high blood pressure, asthma, arthritis and depression.

Step away from the screen

In its 2016 survey, the AAFP found that men spend, on average, about 20 hours each week working at a computer and 19 hours in front of a television. Men should balance inactivity with exercise and active hobbies that can reduce stress and improve their physical and mental health.

Develop a relationship with a family physician

If men develop ongoing relationships with their family physicians, their perception of good health is more likely to become reality, according to Wanda Filer, AAFP president and a practicing family physician.

As the name implies, a family physician not only treats the whole person, but the whole family. The physician has a real advantage in knowing and treating a man’s other family members in that he or she gains insight into factors in a man’s home that might affect his health.

To learn more about the 2007 and 2016 surveys, visit aafp.org/menshealth. For
more information about men’s health, visit familydoctor.org.