Belhaven’s Jimmy Courson works on a model with Dave Friedrich in Courson’s garage.

On a sunny afternoon, in a town where Pantego Creek meets Pungo River, just northwest of the Pamlico Sound in North Carolina’s Inner Banks region, a 70-year-old man on an old-fashioned bicycle glides down a dirt lane lined with humble homes. He wears a gritty, somehow gentle expression on his tan, weathered face, despite his missing left eye and lack of an upper left jawbone. He proudly tows behind him a wagon with a beautiful wooden replica of a Coast Guard cutter he built himself from scratch.

The town is Belhaven, Beaufort County, an inviting and popular port of call for recreational boaters traveling the Atlantic Coast. The self-proclaimed “Birthplace of the Atlantic Intracoastal Waterway,” Belhaven is a place where most folks offer a welcoming wave whether they know you or not. You’d likely have to search all day, though, to find a local here who doesn’t know Jimmy Courson. In roles he may not fully understand, Jimmy’s determination, resilience and passion have a tremendous impact on the lives of those around him. 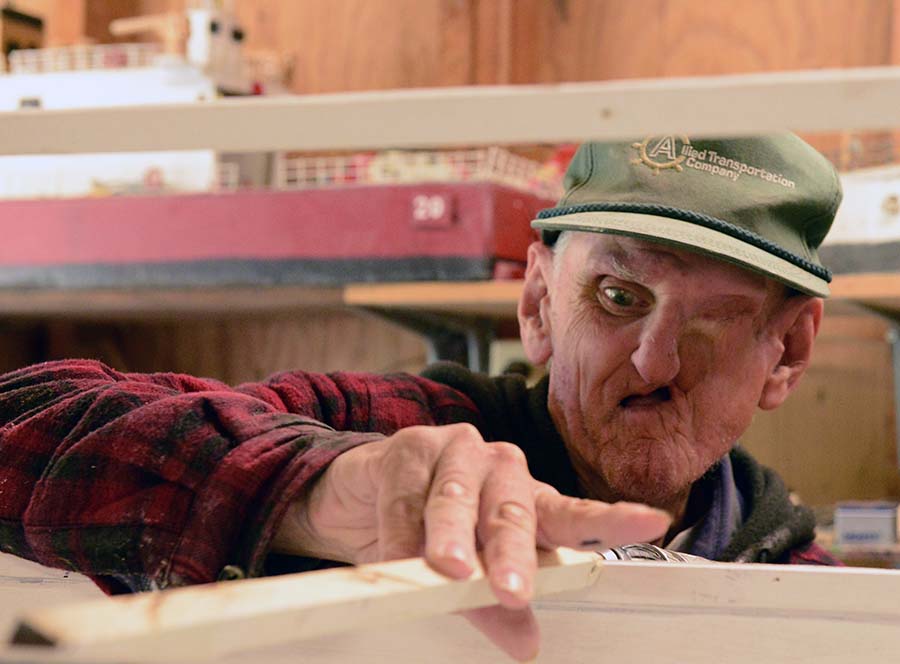 A Coast Guardsman at heart

He is a detail-oriented man devoted to his art, inspired by the rich maritime culture that surrounded him his entire life. Jimmy has lived in Belhaven since his family moved here during the late 1940s. He’s well-known today for his tireless fervor for building model boats, often intricate replicas of Coast Guard ships known as cutters.

Jimmy attended John A. Wilkinson public school until 8th grade, but because of complications at birth that resulted in his learning disability, he attended a special-needs class for the next three years. When he wasn’t in school, he was busy building model boats.

“The earliest I recall Jimmy building model ships was when he was about 13,” said Reid Courson, Jimmy’s younger brother. “It became obvious early on he favored the Coast Guard crafts. This had a lot to do with the fact that it was not uncommon in those days for one of the 95-foot Coast Guard cutters to stop at the docks in Belhaven.”

The cutters passing through weren’t all that inspired Jimmy — he was influenced by the seagoing military service of his family, his community, the eastern North Carolina region and beyond. Jimmy’s father, James, served in the Navy from 1919 to 1945. His uncle, Clyde Farrow, retired from the Coast Guard as the last attending officer at the buoy tender station in nearby Washington. There was also an active Coast Guard Station in Belhaven in the late 1950s and early 1960s.

His father had an old shed in the backyard, a few hand tools and usually some scrap lumber suitable for making small boats. Reid said many neighborhood kids would make crude boats they could pull in the shallow water on the shores of the Pungo River. Jimmy took his model building to a higher level by following the design of existing Coast Guard vessels, replicating the operating parts from whatever hardware he could find.

“He really came up with some interesting improvisations,” said Reid, “trying to duplicate the mechanics and outfitting of everything from Coast Guard cutters and buoy tenders to shrimp boats and barges.”

Up until his late 50s, Jimmy rode his bicycle from Belhaven to Swan Quarter, about 28 miles, took the ferry to Ocracoke, and visited with Coast Guard personnel at the station there. He continued on to the Hatteras Inlet Ferry and stayed at Midgett’s Motel in Hatteras Village. It wasn’t uncommon for him to tow behind him on a wagon a model boat weighing 10 pounds to 30 pounds. 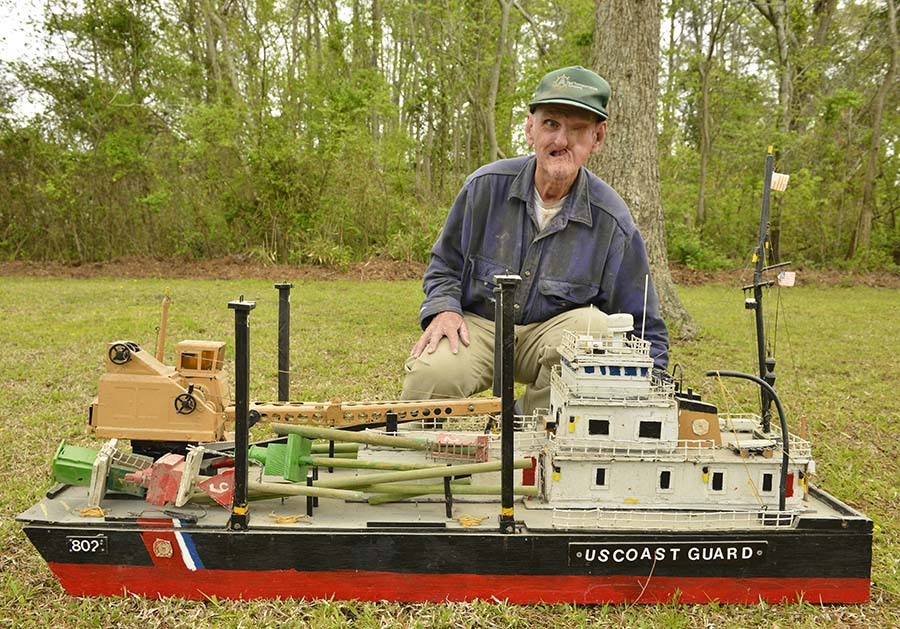 Jimmy Courson crouches behind his rendition of Coast Guard Cutter Kennebec in his yard in Belhaven this spring. Jimmy has been building model ships, including models of Coast Guard cutters, for 57 years.

Jimmy visited other Coast Guard stations over the years: Fort Macon, Oak Island, Morehead. He was declared an honorary Coast Guardsman on more than one occasion, and has a collection of Coast Guard covers and pins. Photo albums in his home document his relationship with the Coast Guard. About 13 years ago, his visits to Coast Guard stations tapered off as he began to experience health issues.

In 2002, Jimmy told Reid he had been experiencing some bleeding from his gums.

“I immediately took him to a dentist who sent us to an oral surgeon,” said Reid. “A biopsy revealed cancerous activity in Jimmy’s oral cavity. Follow-up visits to specialists resulted in extensive surgery followed by radiation. This treatment failed, and the following surgery took his left eye, his upper left jawbone, and the entire roof of his mouth, which had to be rebuilt with flesh from his back. Recovery from this second surgery was slow and difficult. Jimmy could no longer smell, eat or speak normally. The extensive radiation resulted in the loss of all his teeth and created an opening in the roof of his mouth. When I was told he would lose an eye in the last surgery, I was very anxious concerning whether he would be able to continue his first love and favorite pastime of constructing models. But with enough time, he returned to the shop. Bit by bit he returned to his work, and today, he’s as full-time as ever.”

These days it is difficult to make out everything Jimmy says, but he enthusiastically describes almost any model in his collection if asked politely at the right place at the right time. 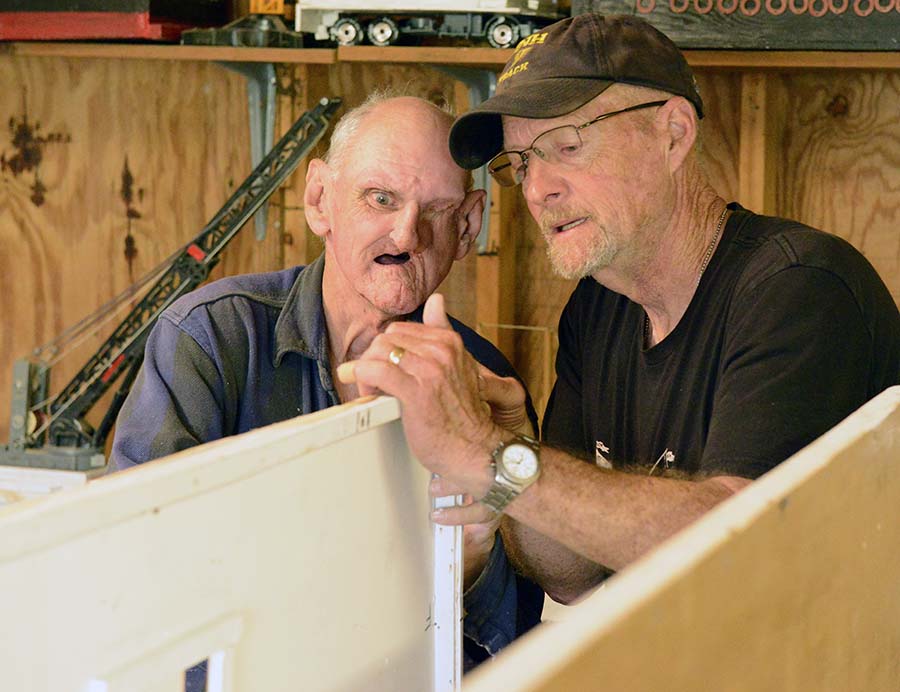 Though he’s now 70, Jimmy still gets around on his bike, riding across town to Belhaven’s waterfront.

That’s how David Friedrich met Jimmy for the first time. A recreational boater who stopped in Belhaven during a voyage along the Atlantic Coast, Friedrich’s first encounter with Jimmy occurred during an especially difficult time in Friedrich’s life — the recent death of his son, killed in the war in Iraq.

Friedrich said when they met Jimmy was slowly towing a red wagon carrying a large model of a tug boat pushing a barge. “His bike was nice and shiny, the wagon had impressive pneumatic tires and the thick, six-foot model had been accurately constructed by this fine craftsman who just happened to be lacking a portion of the left side of his face and head,” recalled Friedrich. “He came up on the porch and sat in the chair to my right. I glanced up and said, ‘Hi. How ya doing?’ He replied by starting to hum a song. He hummed for ten more minutes or so, then moseyed over to his bike and gently left.”

The impact on Friedrich was tremendous. He went on to write about it in a log he kept during the voyage.

“I am reminded many times of the fellow I met in Belhaven, North Carolina,” wrote Friedrich. “He suffered a tremendous event which made the left side of his face look like something had scooped out about half of it. But he had somehow recreated his life, which involved building beautiful models of boats and parading them around his little, friendly and accepting town.”

Friedrich moved to Belhaven in 2007. His relationship with Jimmy continues to play an important role in grieving and healing.

“Like Jimmy, a tremendous event scooped out a large chunk of my spirit and soul,” said Friedrich. “Jimmy is part of what inspired me to move to Belhaven. Moving here has been a part of my effort to recover from the loss of my son and recreate my life. Jimmy inspires me through his actions. Every day, he demonstrates a valuable life lesson — to have something to do and to get busy doing it.”

Petty Officer Nate Littlejohn, a public affairs specialist, is based in Portsmouth, Va., in the Coast Guard 5th District. He helped to arrange for Jimmy Courson to meet the Commandant of the Coast Guard at an event in late May when Elizabeth City was declared an official Coast Guard City.