in less than 3 minutes

Chris Griffin and Brad Payne, linemen from Union Power Cooperative in Monroe and French Broad EMC in Marshall, respectively, were crowned Pole Top Rescue Champions in October. They outperformed 22 other local champions Oct. 16 at the state competition held at the Raleigh headquarters of North Carolina's electric cooperatives. More than 600 of North Carolina's electric cooperative line workers began the year competing for the 2014 title.

The championship, held every two years, demonstrates the skill and agility of co-op linemen in recognizing a victim in trouble on a power pole, reporting the incident, scaling the pole, safely lowering the victim and beginning a first aid process. Competitors with the fastest times win. 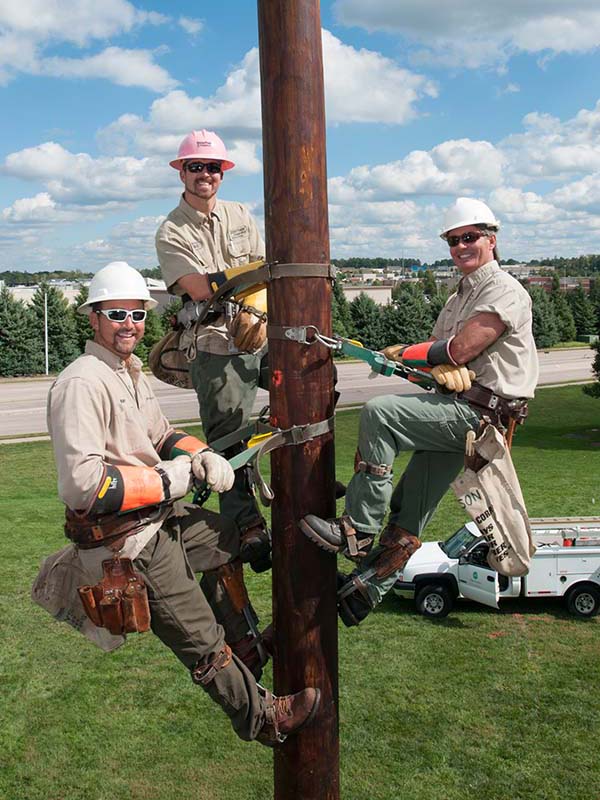 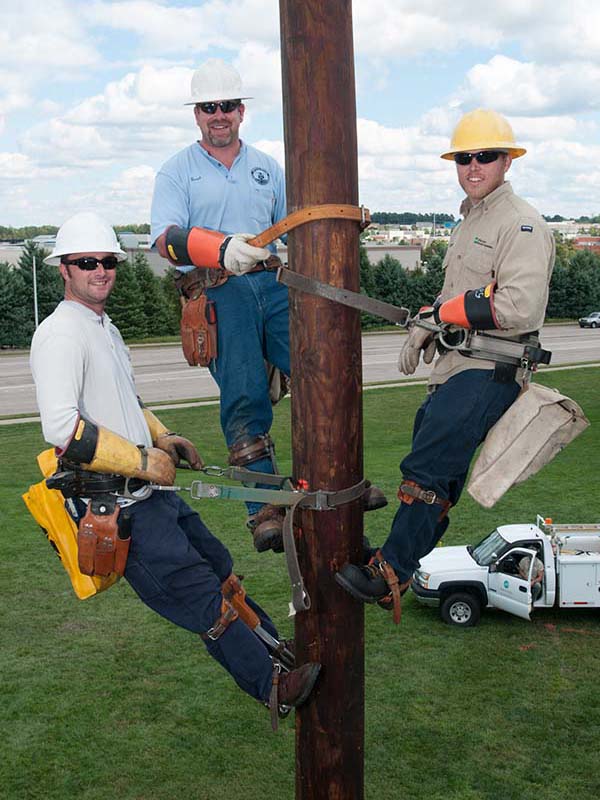 This year's competition had two categories based on the type of protection competitors used to prevent themselves from falling. One group used a newer form of personal fall protection gear that wraps around the pole during the ascent and descent; the other group secured themselves in the more traditional way with a lifeline rope and life hook. Griffin won the category with the personal fall protection gear, and Payne won first prize in the lifeline protection category. In 2015, new federal safety rules will eliminate the use of the lifeline gear on poles.

Chris Griffin's time of 1:33.47 set a new state record for performing the rescue using personal fall protection. He finished third in 2012, running in 1:57.62.

Griffin's time broke by about three-tenths of a second the record set in 2012 by three-time champion Leonard Person of Tri-County EMC whose time of 1:35.48 this year gave him a second-place finish in the personal fall protection category. Placing third was Kenny Simmons of Pee Dee EMC with a time of 1:37.97. He placed first in the lifeline category in 2012 with a time of 1:36.74.

In the Pole Top Rescue scenario, linemen place an emergency radio call, don climbing gear, climb 20 feet up a utility pole, rig a rope, lower a 105-pound mannequin and begin lifesaving procedures. Judges time the runs and watch every move, adding to a competitor's time for any lapses in safety procedures.

Performing a rescue is one of many skills linemen learn in a rigorous training program that emphasizes diligence and safety. Cooperative linemen work in a wide variety of jobs, including building, maintaining and repairing electric lines, poles and other equipment, such as transformers, regulators, insulators, meters and substation facilities. They also work to restore power after outages, and in times of major damage they can be sent to other regions where they help co-op crews rebuild their systems.

Judging the Pole Top Rescue competition were staff members and associates of the Job Training & Safety program maintained by the North Carolina Association of Electric Cooperatives (NCAEC). Many of the linemen at this year's event, including those attending as alternates for their co-op's lead competitor, have studied in the Electric Line Construction Technology program coordinated by NCAEC in conjunction with Nash Community College. Nash CC president William S. Carver II attended the event.

Master of ceremonies for the competition was Dale F. Lambert, CEO of Randolph EMC in Asheboro, where he worked as a lineman for nine years before taking on management responsibilities. 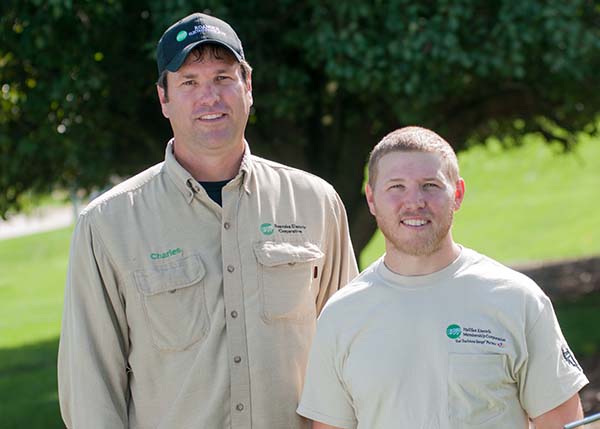 Line work as a family affair

Spectators and fellow linemen at the Oct. 16 statewide Pole Top Rescue Competition witnessed, for the first time ever, a father and son compete in the event. Chad Bryant, a Lineman II for Halifax EMC based in Enfield, went head-to-head with this father, Charles Bryant, Serviceman for Roanoke Electric Cooperative based in Ahoskie.

It seems Chad's father not only influenced his career but also his choice to work for a cooperative. Growing up, Chad witnessed firsthand the family-oriented working atmosphere of the cooperative. He likes the fact that Halifax EMC, like most cooperatives, is a smaller organization where he is not just a number.

Charles and his wife, Heather, live in Roanoke Rapids with daughter Kristin. Chad, a graduate of the Nash Community College Electric Line Construction Technology program, has worked with Halifax EMC since June 2013 and previously was a lineman with Edgecombe-Martin County EMC, Tarboro.

When asked about the most valuable piece of advice he has shared with Chad concerning line work, Charles replied, "Be safe." It's something he tells his son on a daily basis.