I live in Texas, but you’ll notice that my bio says I carry memories of North Carolina in my heart. Those memories involve a childhood visit with my “Uncle” Walter, who had a fascination for North Carolina place names.

Actually, Walter was my dad’s cousin, but he asked my brother and me to call him Uncle Walter because it was more “homey.” I took to him right away because he was so much like my dad. Both of them were curious about the world around them.

“I was hooked. Already awestruck by the tall pine trees and beautiful scenery, now I wanted to learn how to talk like a native North Carolinian.”

My first lesson in Tar Heel pronunciations came on a drive from Pinehurst (where Walter and his wife, Thelma, lived) to the Uwharrie National Forest. He slowed the car to a crawl as we neared the entrance and asked me to read the name on the sign.

I was hooked. Already awestruck by the tall pine trees and beautiful scenery, now my 8-year-old self wanted to learn how to talk like a native North Carolinian. I wanted to discover other mysterious place names and maybe find out why they were pronounced that way.

Over the next two weeks, Uncle Walter and I spent several hours poring over a North Carolina state map and discussing the correct/local way to say a city or place name. I’d heard of Raleigh (Raw-Lee) before, probably while watching an Andy Griffith Show rerun. But when Uncle Walter pointed to a city south of Raleigh that had two names, I was unsure.

Whenever confronted with an unfamiliar word, I tried to sound it out. So, timidly, I said, “FEW-Kway vuh-REE-nuh?”

“Very good,” he said, smiling at me. When I asked why one city had two names, he said it used to be two cities and they’d become one. I thought it (Fuquay Varina) sounded like a lady’s name, with her last name first.

So far, we’d been hopscotching around the map, looking for unusual place names. Now, Uncle Walter suggested a new strategy. My family’s visit wouldn’t last long enough for us to see all the places he wanted to show us, so why not plan a make-believe trip? 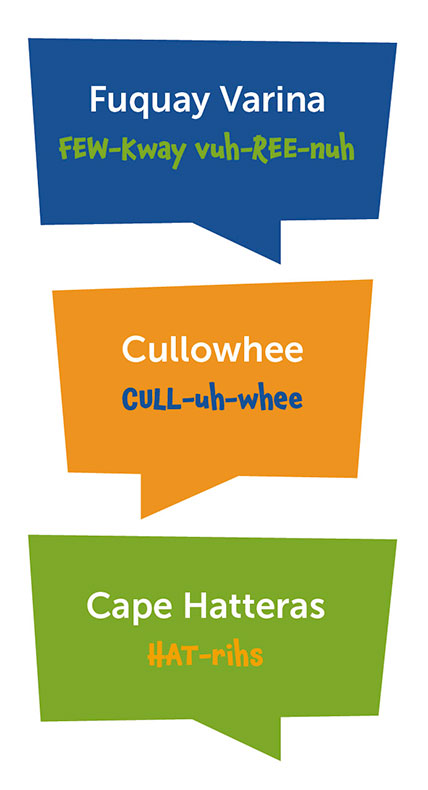 “Sounds like fun!” I agreed. “Where will we go first?”

Checking the map, we chose a route west, which happened to contain some tricky place names. When we got to Asheville, he told me that the county name didn’t sound like it looked. Spelled Buncombe, it was pronounced BUNK-um. Then there was Cullowhee — home of Western Carolina University. The locals called it CULL-uh-whee.

At the far western border with Tennessee was the Appalachian Mountains. The pronounciation may seem tricky, but in North Carolina its decidedly ap-a-LATCH-UN.

“That’s enough for today,” he said, folding the map. “Next time, we’ll go east to the Outer Banks.”

A few days later, Uncle Walter and I “hit the road.” When I saw the long, thin barrier island, it reminded me of a similar place — Padre Island — just off of the Texas coast. I knew that the Outer Banks, like our Padre Island, had weathered many hurricanes. Uncle Walter told me that it was a special place, with lots of interesting things to see. Like the Bodie Island Lighthouse.

“If you wanted to sound like a local, you’d pronounce it BODY,” he told me. “And I’ll bet you’ve heard of Cape Hatteras before, haven’t you? Well, the residents would know you were a tourist if you didn’t call it HAT-rihs.”

It was a good place to end our make-believe travels. A few days later, my family left for Texas. But not before I showed dear Uncle Walter the name of my hometown and asked him how he would say it.

Tell us how you 'say it like a Tar Heel'!

Our state is full of quirky place names and pronunciations. What’s your favorite? Share your thoughts in the comments section below.