The Buzz on Our Bees - Carolina Country
Feature Story
June 2014

The Buzz on Our Bees

How I learned to get along with honeybees 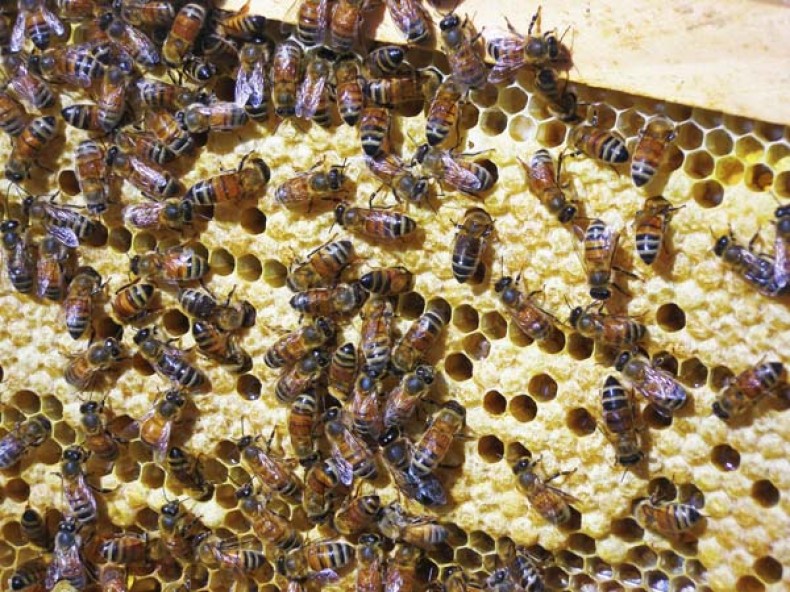 Why do people willingly consort with creatures known for their stinging ability? Is it the lure of liquid gold honey or is there some mysterious siren song emitted for us when we hear the hum of an active hive? When my husband first brought up the subject of keeping bees, I thought he was insane. Why keep a box of potentially threatening insects nearby? Devious man that he is, he got our teenaged son interested, so I was outvoted. 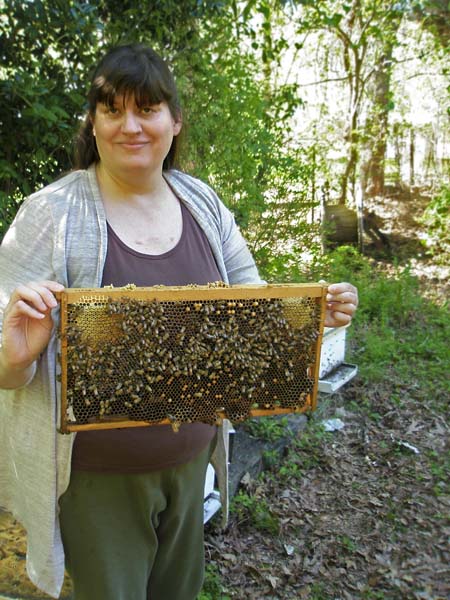 Despite my reservations, I found that bees and I get along just fine.

As the weather warmed, we were invited to a hive opening. I arrived outfitted in the beekeeping equivalent of a hazmat suit, full veil, hat, long sleeves, long pants and gloves. I armored myself mentally as well and approached the ominous collection of white boxes expecting Bee-maggedon. Going through my mind were scenes from horror movies I should not have watched as an adolescent: "The Swarm" and "The Killer Bees." But everyone else walked up in shorts, shirt sleeves and sneakers.

The keeper lifted the lid off the box and began talking in a low, gentle tone. Utilizing a smoker (a device resembling a tin watering can with a bellows), he streamed smoke over the bees to settle them. As he began lifting frames out, curiosity conquered my cowardice and I moved forward. Lifting out frames (where bees store their honey and lay eggs), the keeper showed neatly organized honeycombs that held worker bee larvae as well as drones (males) and a few queen cells. Bees crawling on the frames seemed completely uninterested in humans.

The bee enthusiasts picked up frame after frame while casually chatting in bee speak, dropping such words as propolis (bee glue) and brood (baby bees). The buzzing around me reached a crescendo of lawnmower proportions. Someone looked at me and said, "You're blocking the door." Confused, I stared at him. Then my husband moved me aside and pointed to the hive entrance that I was standing in front of. Behind me and heading for the "door" was a traffic jam worthy of the L.A. Freeway with the exception that it consisted of bees instead of cars. Once the stupid human (me) moved, they rushed in with their loads of pollen and nectar. I soon realized that if I stayed out of their way, I was of no interest to them.

Our nuke (beginner hive) came home about a month later. Despite my reservations, I found that bees and I get along just fine. They don't get up until sun hits the hive (10 a.m. for us). This is just when I head inside. They spend their days seeking things to pollinate and raising brood. Happily for my son they like clover, so he gets a pass on mowing certain areas of the lawn. Our family has bonded over the hive. No one, not even Storm the overly curious dog, has been stung.

What happens in a hive?

Even if you don't want your own hive, you can take steps to help preserve honeybees. Dr. Ambrose of NC State, offers these tips.

■ Be careful with use of pesticides. Any pesticide toxic to bees has a warning label. Look at the product before using it. Don't spray until late afternoon, when honeybees have returned to their hives. Most pesticides break down quickly. By next day, most of the toxicity has broken down.

■ Buy local honey. Although unproven, local honey has been said to help with allergies. Honey is sweeter than sugar. Local honey is the least processed sweetener available. Even so, we import almost as much honey as we produce. Honey from overseas, especially from China, may be adulterated with corn syrup and mislabeled.

Bees gather at a hive's entrance then deposit their load of pollen or nectar inside. Everyone has a job, whether it is caring for the young, cleaning the hive, gathering food or guarding the door. The young are raised by females (worker bees) assigned nanny duty. The queen lays eggs to keep the community going. Drones — males whose only job is to impregnate the queen — are pushed out when the weather turns cold. Food and shelter are for those who have worked to propagate and preserve the hive. (Mulling over this information, I considered that, perhaps in some instances, bees are smarter than humans.)

Honeybees have been documented ranging as far as 7.44 miles to forage, so a neighborhood hive can have a profound effect on plants within their area. They also can reduce the incidence of insect stings by filling a niche that would otherwise be taken by more aggressive insects such as wasps or hornets (a kind of wasp).

Bring back the bees

In North Carolina beekeeping is a hobby that is rapidly growing in popularity among people who like the idea of being more self-sufficient. Honeybees are the most important pollinator for crops grown in North Carolina, including strawberries, melons, peaches, blueberries, cotton, soybeans and peanuts. Since the 1980s, wild honeybee populations have been almost completely destroyed by the proliferation of exotic mites, pesticides and hive beetles. The effect has been amplified by the overuse of pesticides. According to Dr. John Ambrose, alumni distinguished undergraduate professor emeritus at N.C. State University, there are less than half the honeybees in the U.S. than what existed 20 years ago.

In 1982, NC State and the N.C. Department of Agriculture created the North Carolina Master Beekeeper Program. It is the largest program of its kind in the U.S, with more than 2,800 members.

The North Carolina Zoo has a honeybee exhibit that features an observation hive covered with glass where you can watch bees at work, try to find the queen (hint: she has a white paint spot) and learn to identify brood, nectar and honey. Children like the playhouse modeled after an old fashioned bee skep (hive made of grass or straw).

Julie Bates and her family live in Asheboro and are members of Randolph EMC.