The Joys of Good Bread

By Bridgette A. Lacy | Photos by Randy Berger 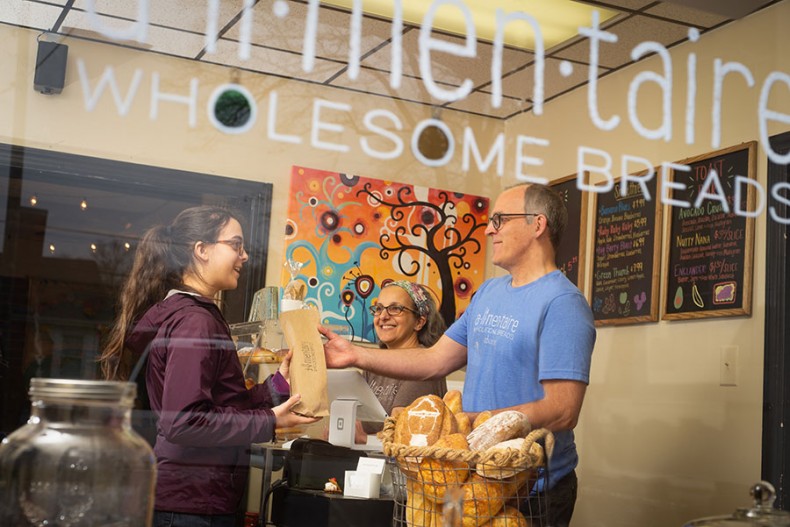 Steve and Franca Gilbert believe all people should have wholesome breads.

As a family and as business owners, the couple believes in “nourishment over convenience, flavor over cost and goodwill over profit.” With those principles, the Gilberts started Alimentaire Wholesome Breads in Tarboro, the only bakery in rural Edgecombe County. 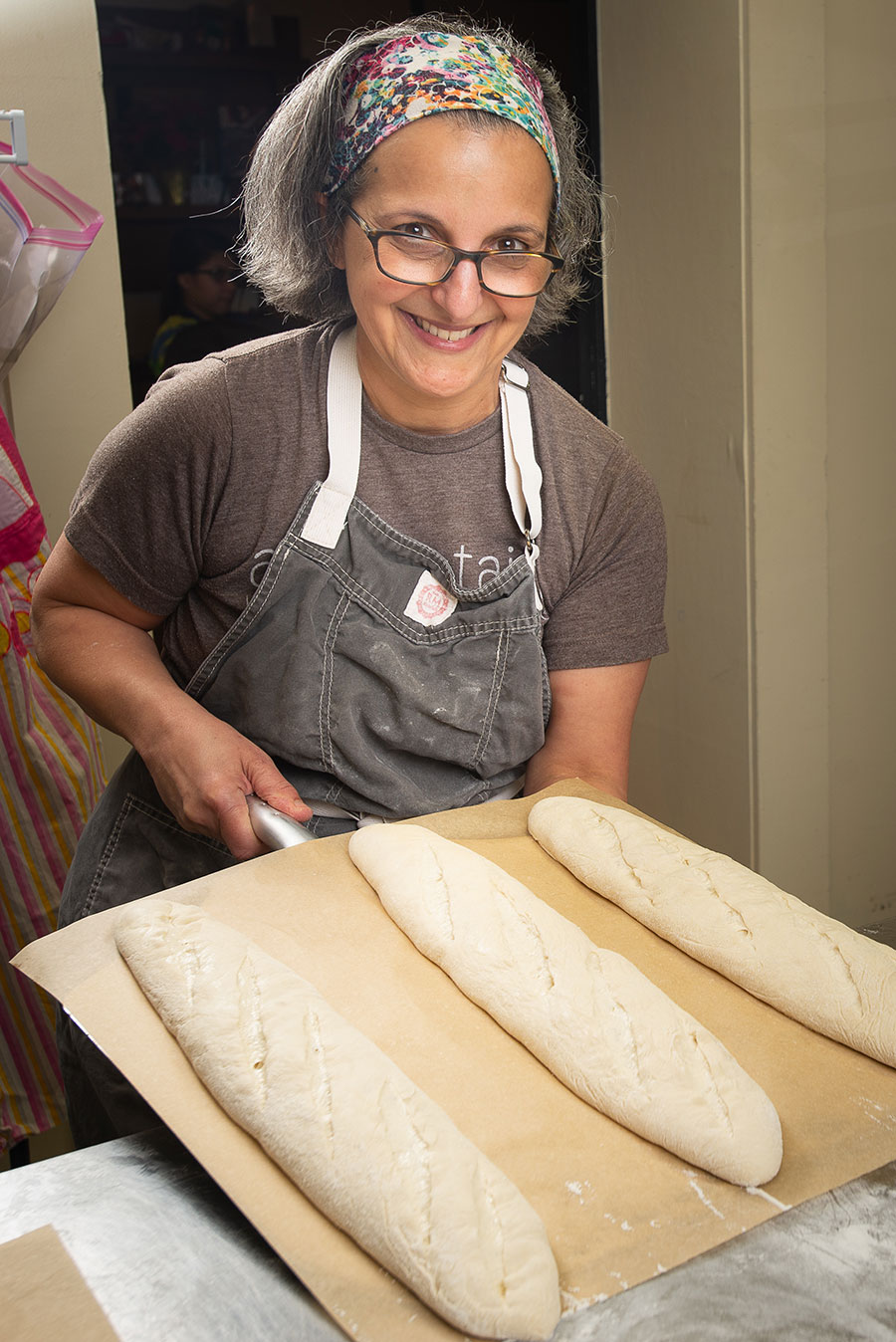 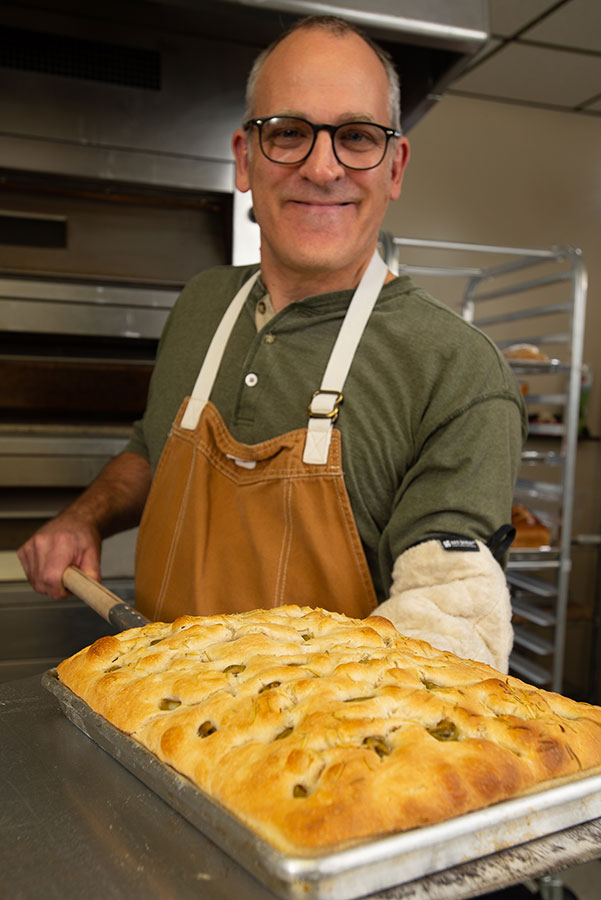 “I don’t use chemical yeast,” Franca explains. “I use a sourdough starter for all the pastries and breads except the quick breads.”

“Alimentaire” is the French word for nourishment. The small bakery located right across from the town square sells baguettes, white sandwich loaves, wheat boules and ciabatta rolls, along with a variety of specialty breads, pastries, biscotti, cookies, scones and croissants.

Franca uses locally sourced ingredients, including organic flour from Lindley Mills based in Graham. The couple also sells a variety of local or regional food products such as lunch meats, cheeses, pastas and sauces from Capri Flavors based in Morrisville, as well as kale, spinach, lettuces and seasonal vegetables from Lake Valley Farms in Tarboro.

Shoppers can easily pick up fresh produce, meats and breads to make a flavorful meal at home. Or they can make themselves comfortable at one of the community tables in the bakery and eat a warm piece of bread right out of the oven.

While the Gilberts have only been in business in Tarboro for a little over a year, they have spent very little on advertisement. Their reputation has spread by word of mouth. And they have already received recognition. The NC Rural Center honored them as the 2018 Rural Entrepreneurs of the Year.

The award recognizes entrepreneurs who are making a significant difference on their local economy, serving as mentors to other local entrepreneurs, and taking leadership roles in their rural community.

“They just captured our hearts in lots of ways,” says Rural Center President Patrick Woodie. “They showed up with a vision for how they wanted to do things. They understand the health of their business is dependent upon the health of their local community. They have quickly become a part of the fabric of that community.”

“Many of our rural communities suffer from food deserts,” he continues. “They don’t have access to fresh and quality foods. As rural food entrepreneurs, the Gilberts are driven by the idea of using food for a purpose … And small business is the absolute backbone of rural North Carolina.”

The Gilberts believe that “real food made mostly from scratch nourishes a healthier, happier, and more resilient future for ourselves, one another, and the world.”

Franca says it was important to them to accept WIC (Women, Infants, and Children) vouchers so underserved communities could have access to healthy breads. The bakery also offers half-loaves for people who live alone. 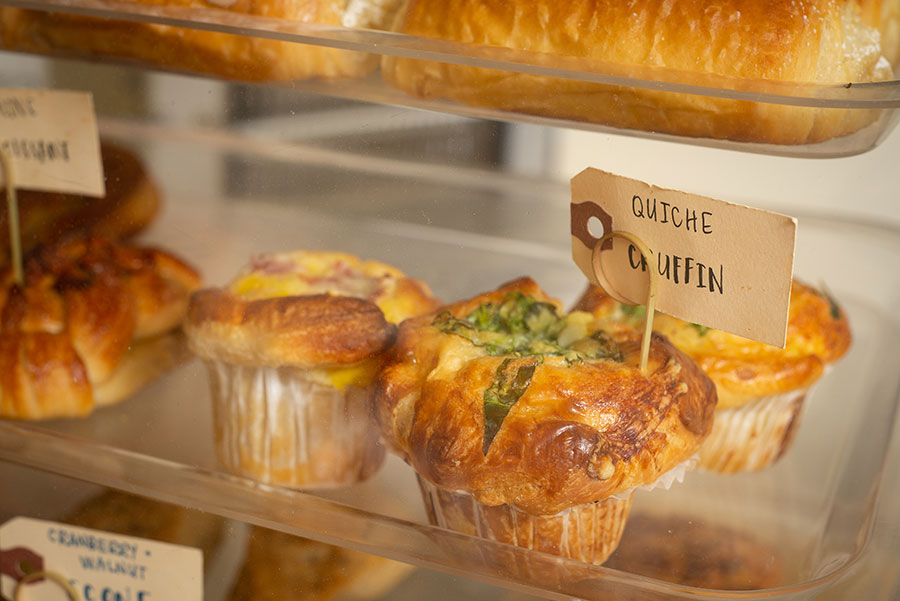 The road to Tarboro

The couple, married for 24 years, work together like bread and butter. The two met at Fort Bragg, where they were both U.S. Army paratroopers. Franca, originally from Belgium, started baking early in the marriage because she couldn’t find good bread to feed their three children.

Their journey to Tarboro started when the couple met Inez Ribustello, the co-owner of On the Square restaurant and the Tarboro Brewing Company at the Carolina Food Summit in 2016.

Inez suggested the Gilberts, who then lived in Franklin County, come to Tarboro for a pop-up bakery once a month to sell their breads. Customers kept coming back. The demand for their breads grew. So Franca, a former Wake Forest French teacher, and Steve, a small business start-up entrepreneur, decided to move to Tarboro and open a bakery. 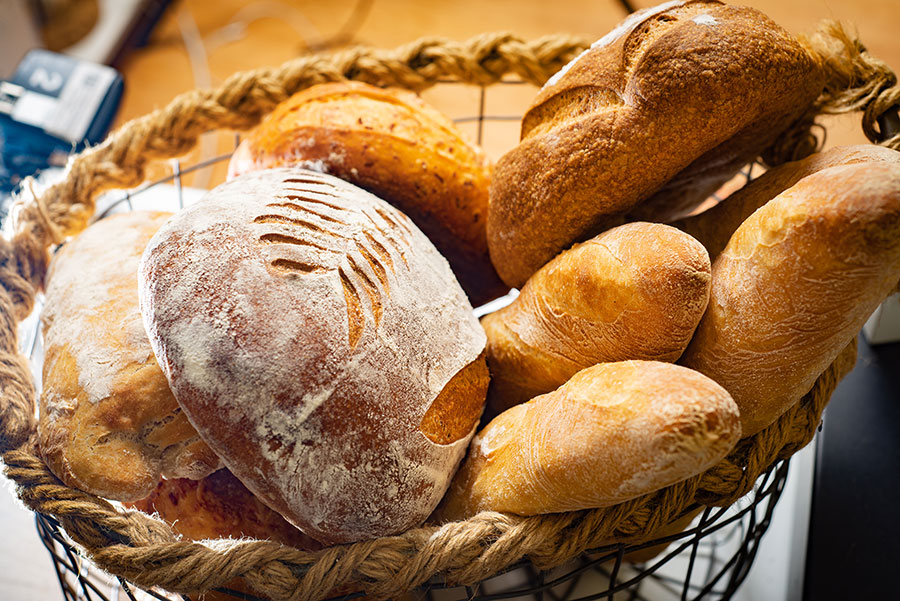 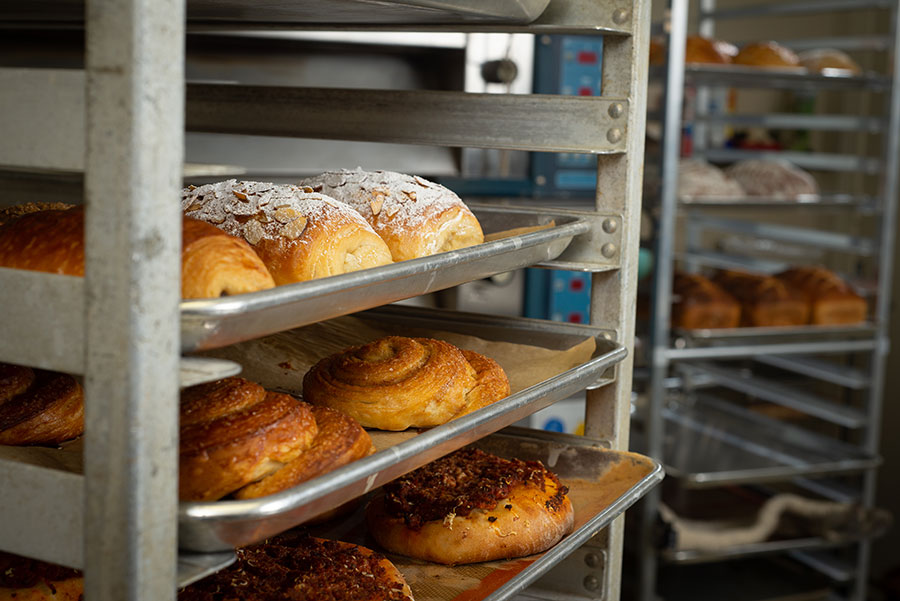 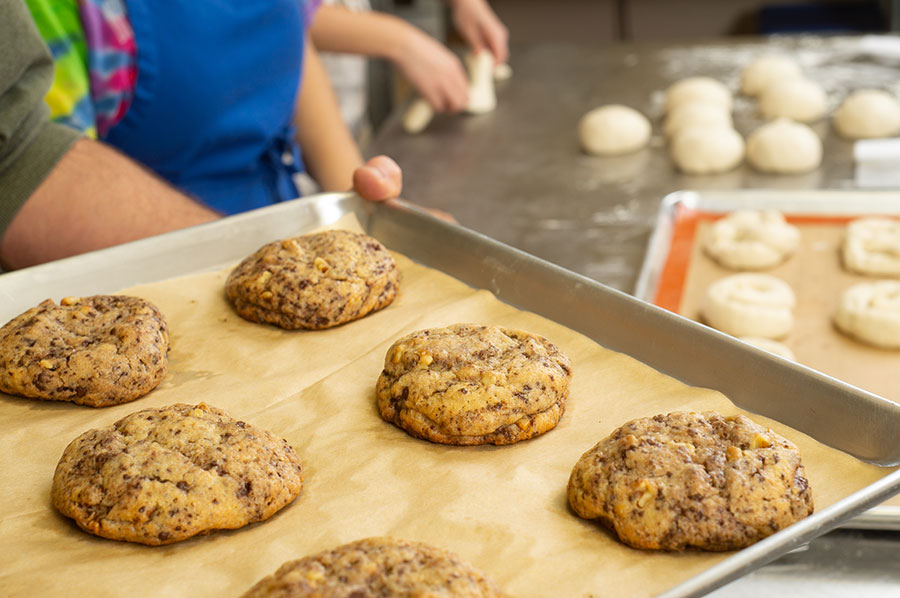 Now the Gilberts supply homemade pretzels for the Ribustello’s brewery and baguettes for the restaurant. In addition, their customers include hospital workers from nearby Greenville, teachers, lawyers and everyday folks looking for good bread and fellowship.

“This town had been talking about needing a bakery,” says Kevin Cross, who moved to Tarboro five years ago to work in the Pfizer’s Rocky Mount pharmaceutical facility. Kevin, a quality control manager, likes picking up pastries to share with his staff.

And when the bakery opened, he started a new morning routine.

“I come in for coffee and an almond croissant or a blueberry lemon scone. Franca and Steve will often sit down and have a cup of coffee with me. They are really involved in the community. Sometimes new people will lay low. Not them.”

Many people drive several hours to participate in their cooking classes, including pasta, bread and pizza making.

“People tell us ‘I don’t know what we used to do on Saturdays,’ ” Steve says. “We are a gathering spot for singles, families and retirees. We often introduce people who live here but who have never met. It’s gratifying to have this type of response.” 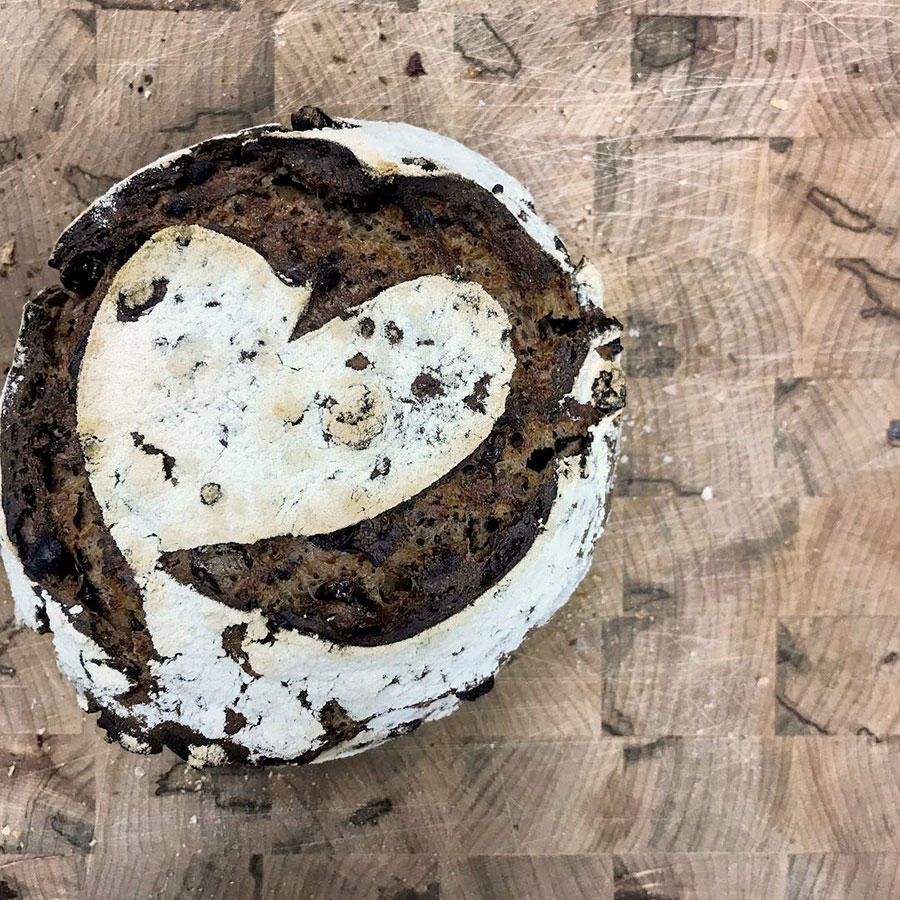 Franca Gilbert shared one of her treasured bread recipes with us, and we're passing it on to you. This rich and chocolatey sourdough is accented with fruity, tart cranberries. Try Sweetheart Chocolate Cranberry Rye Sourdough Bread.