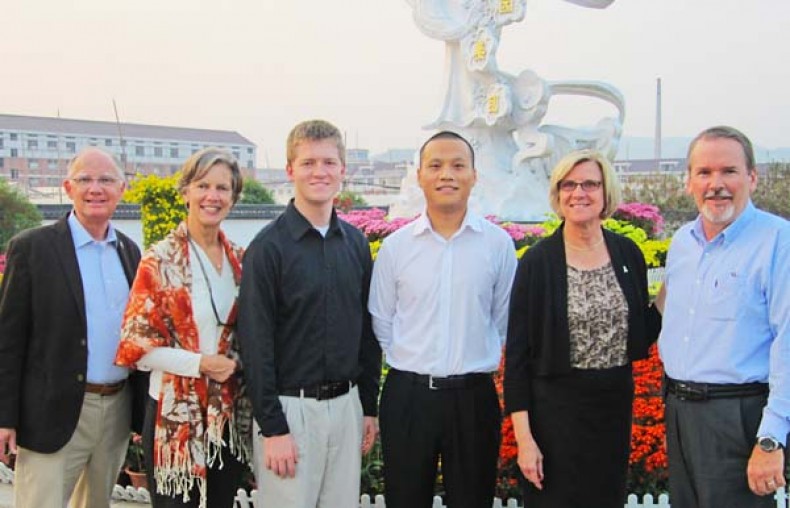 Last November, I had the opportunity to travel to China with a delegation from Appalachian State University. While I think of myself as an eager traveler who enjoys submersing myself in another culture, there are always experiences when I have to ask myself, "Is this really happening to me?"

It was a moment at the dinner table that brought home to me how far from home I actually was. The cuisine in mainland China does not exactly come from Aunt Bea's cookbook. One dining experience stands out in particular. Our delegation entered a small restaurant in the town of Yiwu. We had just come off the high-speed train from Shanghai. Our dining options on the train ranged from packaged chicken feet to Hägeen-Dazs ice cream. Needless to say, we were famished. Upon entering the restaurant, we were directed to the left side of the room to order our meal. This was where things became interesting.

I thought at first I was walking towards a buffet, but that was not the case. Every course available for ordering had been prepared and displayed along these two large stands, similar to a produce stand found in a typical American grocery store. As we circled the display, I spotted some of my favorite dishes, such as Kung Pao chicken and Mongolian beef. However, there were a few things that I didn't recognize: fried scorpions, octopus, and some sort of cooked animal with eyes looking directly at me. Now, I'm not the picky American tourist by any means. I'm not saying it was bad. I am simply saying it was different.

With the help of the young lady who had picked us up from the train station, we selected some of the tamer options and made our way back to our table. I became excited when the waitress presented a bottle with a red, white and blue logo – the universal symbol for Pepsi. Ah, yes! There I was in a small village in China at a hole-in-the-wall restaurant drinking a beverage that was crafted in North Carolina. The Pepsi high convinced me that things would go well.

The servers brought out one of the courses we selected, and we began enjoying our meal and engaging our hosts with conversation. But the conversation changed as the second course arrived. The server placed a small soup bowl at each of our seats. Inside the bowl was this large, brown something that looked most like a mushroom. We all jabbed it with our forks and made a few wise cracks as we speculated what it was. The young lady assisting us spoke very little English and did not pick up on our plea for help. In this moment, I transported my thoughts back to a baseball field in the mountains of North Carolina, and I could hear Coach Evans saying, "Suck it up." So, I did.

I slurped up what I thought was a slimy mushroom. The look of disbelief I had on my face must have been worth a million dollars. But I chewed the spongy substance and swallowed it right along with my pride. Feeling both accomplished and disturbed, I had to know what I just put into my system. To this day, probably for the rest of my life, I shiver when I hear the words, "sea urchin."

Jacob Brooks in 2010 represented Blue Ridge Electric on the Youth Tour and North Carolina on the Youth Leadership Council. A native of Alleghany County, he is a senior at Appalachian State University where he is president of Appalachian Student Ambassadors.