Driving the mower, a ride of passage

First I had to figure out how to get up to the seat. 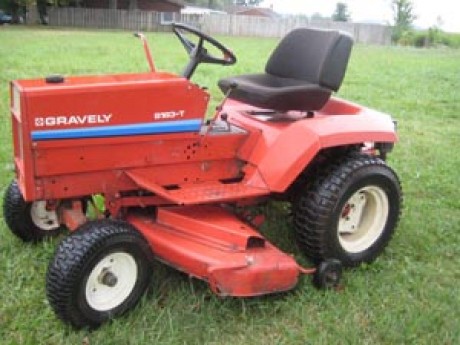 There are several milestones in a young man’s life, such as getting your license, owning your first car, graduating high school. One of my milestones was a little different: driving our lawnmower.

Ever since I can remember, I was enthralled with that big red machine. Everything was simply perfect on this machine: the color, the sound, the headlights, a throttle control that had the small turtle and rabbit beside it (I was positive they were placed there because I loved turtles). Simply put, this lawnmower had to have been made in heaven. My mother would hitch my red wagon to the back of the lawnmower, put me and my brother in it, and pull us along while she mowed. Those were the days.

I can remember when my date with destiny finally arrived. It was a warm summer evening in beautiful Ennice, N.C. I was outside admiring the different sounds rocks made when thrown against various objects. Dad was mowing the yard and also watching me. He was aware my targets were becoming more risky. When I took aim at the tractor, I heard Dad yell in that stop-what-you’re-doing-and-come-here tone, “Jacob Isaac!” He went straight to the middle name. He didn’t even shout my first name as a preemptive strike. I was doomed, and I knew it.

I began my walk of shame towards him. I hoped lightning would strike me, so I wouldn’t have to face the consequences. I also contemplated running away, but who was I kidding? He was on a mower that made Ferarris look weak. I wouldn’t get far.

I stood in front of him trembling: “Yes sir?”

He grinned at me. “Hop up here, buddy. It’s time you learned how to run this contraption.”

At that point, I knew there had to be a God. How did this happen? I should have welts on my rear end at this point. I shouldn’t be preparing for the best ride of my life. But I wasn’t going to question it. I had driving to do.

When I hit the seat, my heart swelled with pride. I was like a king on his throne. The power I felt was overwhelming. I felt like John Wayne sitting on a horse.

He explained to me the mechanics of my new red chariot. I listened intently, soaking it all in. Once he finished, I was ready. I stretched my leg out toward the gas pedal, but oh no! My legs weren’t long enough! What would I do? My dreams came crumbling down before my eyes. I stretched and strained: nothing. I kicked my leg trying to make it grow: nothing. My world was shattered.

Then, out of nowhere, my father locked down the gas pedal with his hand. I was off. I sat on that lawnmower and cut that grass like a pro, mostly.

All I needed was a dip of tobacco, and I would be just like my old man. With that said, I stuck my tongue in the corner of my mouth for the appearance.

They say I mowed for roughly 10 minutes. I like to think it was more like two hours. But I had done it. I had conquered the lawn.

Jacob Brooks of Alleghany County, who represented electric cooperatives as the 2010 national Youth Leadership Council spokesman, heads to Appalachian State University as a sophomore this fall.