Five guys and a flat-screen TV

Another Christmastime adventure in the High Country 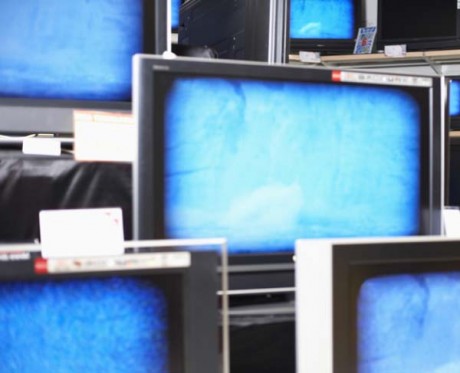 Here is a tale of my first Black Friday experience that took place two years ago with my brother, Josh, and three of our dearest friends. I will protect the anonymity and personal pride of our friends, however, by not sharing their names. Josh can get over it.

Long story short, the five of us found ourselves outside of an h.h. gregg home appliance store in Winston-Salem, about an hour and 15 minutes' drive from Ennice, Alleghany County. We stood in line with the die-hard shoppers, laughing about how ridiculous it was that we had set off on this adventure without any intentions of making a purchase. (We've never been successful at planning our adventures.)

But when the flier advertising the sales made its way through the crowd, we found hidden treasure: a 60-inch, high-definition, flat-screen television with all the bells and whistles for less than half the retail price. There were only five of those suckers, and we wanted one. Josh and I had contemplated surprising our father with a new TV for Christmas. Of course, we certainly weren't envisioning the Titanic of televisions. We were thinking something much smaller and not so obnoxious. But, as any man would, I began imagining seeing my Packers and Braves playing on this beauty. I felt like if Tim "The Tool Man" Taylor had a TV, it would be this one.

The doors opened at midnight, and we raced for this "door buster" item. Like lions after a gazelle, we pounced on our prey. I'm ashamed to say that the story becomes even more ridiculous from here.

One problem with purchasing a large television is finding a way to get it home. As you might expect, we didn't make the necessary preparations. Our car was already a little cramped with the five of us. Adding a gigantic television into the mix was the last thing we needed. We laid down the back seats in our Ford Escape (that's right, a vehicle barely large enough to haul four people and three bags of groceries), and were able to fit in the television all catty-cornered. By doing so, we eliminated seating room for myself, Josh and Comrade #1.

But, like all rural Americans, we carry a can-do attitude.

Josh led the way by climbing underneath the television, and we followed. That's right, the three of us lay flat on our backs resting this behemoth of a television on our bodies as we traveled back to Ennice. I wish I could tell you there were no mishaps along the way, but the police officer who pulled us over certainly dampened the mood.

I saw the blue lights bouncing of off the interior of the car, and I knew right away that I was going to be in big, big trouble. We pulled the car over and all immediately began to panic. We had been traveling only 55 mph up the interstate and could not believe we were being pulled. We already knew this was going to be quite a story to tell. We just hoped for a happy ending.

As the officer made his way to the side of the vehicle, I felt my whole body tremble with anxiety. "That's it," I said. "We're all going to jail."

A special someone, however, was looking out for us throughout this ridiculous adventure. The State Highway Patrolman made his way to the vehicle and just informed Comrade #2 of our busted license plate light. He never noticed the three individuals lying under the giant television box in the back. We received a warning ticket and sheepishly made our way back to Ennice.

Jacob Brooks in 2010 represented Blue Ridge Electric and North Carolina on the electric cooperatives’ national Youth Leadership Council. A native of Alleghany County, he is a senior at Appalachian State University where he is president of Appalachian Student Ambassadors.