Another thing I learned in Washington, D.C. 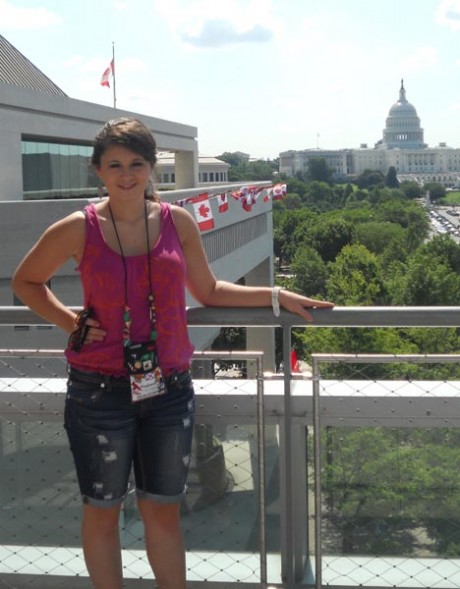 If I heard it once, I heard it a hundred times: “Be careful with your camera.”

Our Youth Tour advisor and chaperones warned us to take care of our cameras. They knew better than we did that: 1) these cameras look alike and are easy to lose, 2) they contain our trip in pictures and become more valuable as time goes by, and 3) we would freak out if we lose ours.

I found out the hard way they were right. On the last day of our action-packed trip to Washington, D.C., I left my camera on a street vendor’s table. We had just gotten off the metro at Crystal City and were going to our hotel, but my camera did not make it that far. When I realized it was gone, it was too late.

Gone were all my pictures and memories. Gone was the camera my dad gave my mother as an anniversary gift. The first thing that came to my mind was, “I just proved my mom right.” She was apprehensive about it anyway and told me I would lose it, but she finally gave in.

We all also had been warned about street vendors: they would try to sell you something for 10 times its real value, or cheat you out of your change. All of my fellow Youth Tourists were looking out for each other. The vendor near the 18th Street metro in Crystal City was Teresa — that’s all I know her by. She sold me a pair of earrings that I spotted as we jumped off the metro. I knew I just had to have those feather earrings. My friend and I ran over to buy them because our group was already out of sight. In a mad dash to find some cash, I set my camera down, paid Teresa, then walked away to catch up to my group. I left my camera right there on the table.

The next morning, as our bus left to return us all to Raleigh, I was all weepy about that camera. Our lead advisor, Jane Forehand of the North Carolina Association of Electric Cooperatives, asked the driver to run by the metro station to see if Teresa was out there yet. At that hour of the morning, she was not.

Teresa had an opportunity to get a few dollars from a pawn shop or sell it to a tourist. She could have made the equivalent of 10 pairs of earrings, or kept the camera as hers. Instead, she turned it on and looked at the photos. Teresa noticed there were several shots of me, one of her last customers. She noticed the Youth Tour badge around my neck. At the beginning of the trip, we all were given pouches and badges saying our name, state and organization. We were to wear them “at all times.” The girls, of course, complained they didn’t look good with an outfit or they were heavy. As it turns out, I had taken a picture of my badge. Teresa could identify me.

She took it upon herself to do a little investigating. She and her grandson looked at the picture of the badge but could barely make out my name. They did see “National Rural Electric Cooperative Association.” They sent e-mail to NRECA — “My name is Teresa and I found Madison Hodgca camera in crystal citi please call me at…” At NRECA, the e-mail was forwarded to Steve Uram (legislative affairs advisor with Youth Tour duties). He e-mailed all the Youth Tour advisors. Ms. Forehand saw the message and got hold of me.

Later I spoke to Teresa on the phone to thank her. With her South American accent communicating was not that easy. But she was ecstatic to get hold of me. She had made it her mission to track me down and with her hard work and kindness she did. And my camera was home, safe and sound.

Yes, a big, busy city such as Washington D.C. has many honest and sincere people.

Madison Hodges was one of 30 rising high school seniors sponsored by North Carolina’s electric cooperatives on the annual Rural Electric Youth Tour to Washington. The week-long adventure teaches the students about the cooperative way of business and includes visits to various monuments, museums and attractions as well as their representatives in Congress. Madison was one of three to represent Blue Ridge Electric.