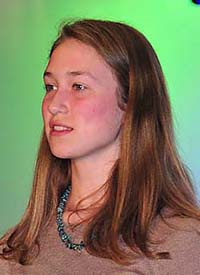 A junior at Heritage High School in Wake Forest, Katie Valchar is a student in Molly Bostic's AP Environmental Science class. In April, she reported to the annual meeting of North Carolina's electric cooperatives on her class experience.

When Mrs. Bostic assigned the "Energy Audit," I thought it would just be a normal lab that applies lessons taught in class. But this was no typical lab. The "Energy Audit" taught me lessons that I will use for the rest of my life.

We had been studying different types of energy — coal, oil, natural gas, wind — and their costs and benefits to families and the environment. We had been doing labs all year, and you know about normal high school labs in a laboratory. But this lab was different. We took the lab to our own homes. For 10 days, we monitored our home's electricity meter and tracked the kilowatt-hour usage. We recorded major appliance usage, thermostat settings and the weather that day. We looked at our electricity bills and calculated the average cost per kilowatt-hour.

I had known that using energy can impact the environment, but I had not known exactly how much. Each student called their energy provider — I called Wake Electric — to find out how much of each type of energy our homes used. With some constant numbers, we then calculated the amount of sulfur dioxide and carbon dioxide our homes produced every week, day and hour. In class, we had already studied about how those substances affect the atmosphere. It was really eye-opening for me to realize that I was a part of that contribution from my own house.

The calculations of the average cost per kilowatt-hour and the average cost of energy per day shocked my family and me. We decided that paying over $8 a day for energy was just too much. It was not that the energy was too expensive, just that we were using too much. The "Energy Audit" gave me specifics on how much money was coming out of my pocket for energy. (Well, actually from my parents' pockets.)

By using Wake Electric's new Monitor and Manage program and Smart Hub app, I had an advantage. With this iPhone application, I could check my house's energy usage from anywhere, anytime. I could see the annual, monthly, weekly, daily and hourly energy usage. I even downloaded it for my parents to use. Usually, we would get our electric bill and accept it. But the app has sparked family discussion. We can see when we have high kilowatt-hour usage and when we have low usage, and we have become more conscious of it. When we use the dryer a lot, we can see the kilowatt-hour usage go up. When a shower is going, we see the same trend. We can say, "Whatever we did in that hour, let's do that less often," and "Whatever we did to be more efficient in that time, let's do that more often."

Now there are two motives in my house to be energy-efficient: we can save money and the atmosphere.

I had never thought that taking two minutes less in the shower would make a visible difference, but it does. I hadn't thought that turning off the kitchen lights when I leave for school would make a difference, but it does, and I could see that it did. Through this lab, I learned about sources of energy, their effects on the environment, and how my family contributes. But the biggest thing I learned was that we don't have to make big changes to make a big difference.