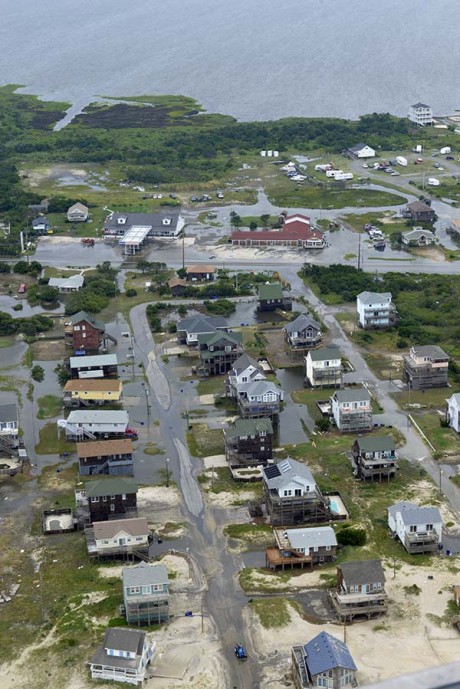 Hurricane Arthur, making landfall earlier than any in North Carolina’s hurricane season history, disrupted July 4 festivities and vacations along the coast and caused some 23,000 power outages for electric cooperatives. The storm reached Category 1 strength (74–95 mph sustained winds) off South Carolina July 3, then became a Category 2 (96–100 mph winds) when making landfall at Shackleford Banks at 11:15 p.m., July 3. Whirling up Pamlico Sound, the storm lashed Ocracoke and Hatteras islands, as well as mainland Hyde and Dare counties, with its eye over Nags Head at about 4:30 a.m. Friday, July 4.

The peak wind speed of 101 mph was recorded at Cape Lookout. Most flooding damage occurred on the sound side of the barrier islands.

Carteret-Craven Electric Cooperative reported 14,000 outages, many caused by a break on a Duke Energy transmission service that affected the area from Cherry Point through Cedar Island. With help from outside co-op and contract crews, Carteret-Craven had 92 workers in the field and 22 inside working to restore power. By early Saturday afternoon, nearly all members had electricity.

Tideland EMC reported 9,644 members without power at 6 a.m. July 4, including all 1,300 on Ocracoke, where the co-op needed to replace 45 damaged power poles along Hwy. 12. Special track equipment was sent over when the Swan Quarter ferry resumed. When North Carolina Electric Membership Corporation fired up its 3-megawatt generator on the island, Tideland was able to distribute power to two different circuits intermittently and in turn –three hours on and three hours off. Co-op staff got word to members to use only essential appliances to keep the generator from overloading and tripping off. By nightfall July 4, Tideland had all its mainland members back on. The co-op flew equipment by helicopter to Hatteras, where repairs were needed on Tideland poles below Hatteras Village. By 9:35 p.m. July 5, all Ocracoke had power.

he main transmission trunk for Cape Hatteras Electric Cooperative did not fail in the storm, but there were about 2,200 outages on the island. Damage, flooding and overwash on Hwy. 12, the only road from the mainland, caused authorities to close highway access to Hatteras until 4 p.m. July 5. All of Hatteras had power by 4 p.m. July 6.