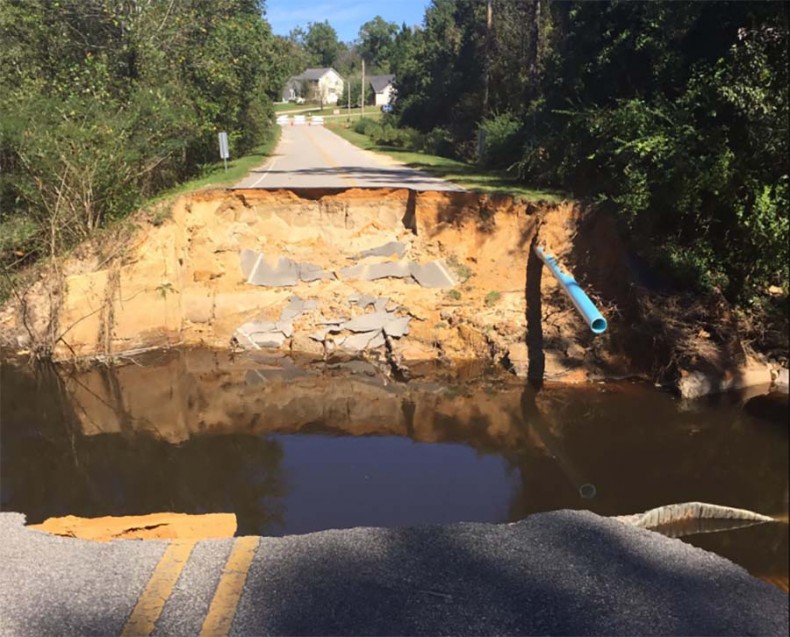 A Lumbee River EMC crew encountered this washed-out road while making repairs to its system.

North Carolina electric cooperative members began feeling the effects of Hurricane Matthew in the morning hours of Saturday, October 8. The storm ran on an unpredictable track and brought enormous amounts of rain to eastern parts of the state, triggering flooding long after the storm had passed. Outages to electric co-op members caused by Matthew extended from central North Carolina to southern, eastern and coastal communities, and peaked at 270,000 on Sunday morning.

Rainfall totals: 18.38 inches of rain recorded in Elizabethtown; 14 to 16 inches in other coastal areas

“Co-op crews really banded together to get power restored as quickly as possible after the storm,” said Mike Burnette, COO of the North Carolina Electric Membership Corporation (NCEMC). “Lineworkers and tree trimmers from affected co-ops were joined by nearly 270 workers from western North Carolina and Kentucky, Maryland, Pennsylvania, Tennessee and Virginia. Crews worked night and day until all power was restored, despite having to navigate overwashed roads, fallen trees, debris and flooding.”

Most importantly, electric co-op line crews had support from their communities and the members they serve. As co-op members cleaned up after the storm, they showed support for co-op crews using letters, cards, social media — even roadside signs.