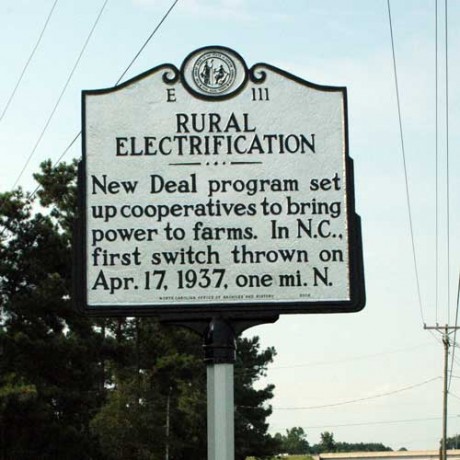 Although many cities and towns in North Carolina enjoyed the benefits of electricity in the early 1900s, the majority of rural communities were left behind.

“We didn’t have refrigeration [when I was a small child], and my mother would put butter in a bucket in the summertime and put it down in the well, not quite to the water,” remembered Edgecombe-Martin County EMC member W. Kitchin Benson, who grew up in Battleboro, in a 1984 interview. “When we got an Aladdin [oil] lamp, we thought we had something then.”

Only 11 percent of all farms in the United States were receiving central station electric service in 1935, according to that year’s annual agricultural census. A group of Edgecombe County farmers set out to change that, and in 1936, after years of meetings with local and federal officials, what would later be called Edgecombe-Martin County Electric Membership Corporation was formed.

One year later — on April 17, 1937 — the cooperative threw its first switch to energize the homes of 82 members. The historical event made Edgecombe-Martin County EMC the oldest electric cooperative in North Carolina, and one of the oldest in the nation.