An early forecast calls for at least seven hurricanes this year

This video from North Carolina's Electric Cooperatives will help you and your family be ready for this hurricane season.

The 2018 Atlantic hurricane season, which runs from June 1 through November 30, is expected to be slightly more active than average, according to Colorado State University climatologists. A recent report predicts 14 named tropical storms, with at least seven reaching hurricane strength.

“We anticipate a slightly above‑average probability for major hurricanes making landfall along the continental United States coastline and in the Caribbean,” said Phil Klotzbach of the Tropical Meteorology Project at Colorado State University.

Klotzbach, who has served as the project’s principal researcher since 2006, predicted that of the seven hurricanes forecast, three of those storms could pack sustained winds topping 111 miles per hour.

The group’s forecast, based upon data compiled over 29 hurricane seasons since 1989, gives North Carolina a 36-percent chance of a hurricane making landfall. Florida leads with a 62-percent chance, followed by Texas (42 percent) and Louisiana (38 percent). 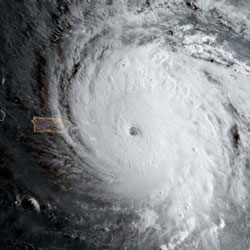