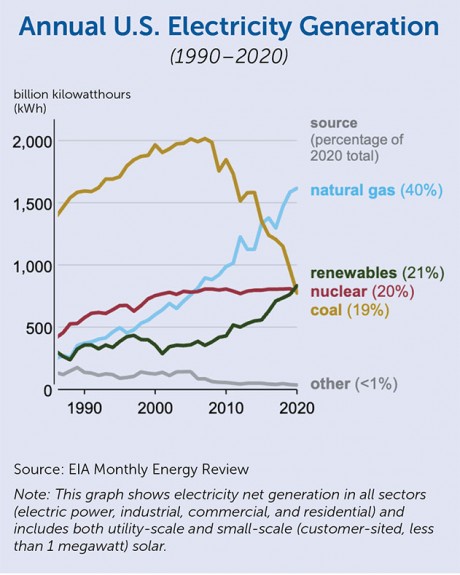 Last year, renewable energy sources — including wind, hydropower, solar, biomass and geothermal energy — generated about 21% of all the electricity generated in the United States, or a record 834 billion kWh. This put renewable generation surpassing both nuclear (790 billion kWh) and coal (774 billion kWh) for the first time on record, according to the U.S. Energy Information Administration (EIA).

Renewables, including wind power and small-scale solar, increased by 9% during the period. Wind power, currently the most prevalent source of renewable electricity in the country, grew 14% in 2020 from 2019.

In coming years, EIA expects natural gas generation to remain dominant while other sources fluctuate. Coal is expected to rebound as the second-largest source in 2021, while renewables are expected to reclaim the #2 spot in 2022.

Q: What was our main power source 100 years ago?

A: From the time our country was founded to the late 1800s, a typical family relied on wood as its primary source of energy, according to EIA. But the nation’s first commercial central power plant — Thomas Edison’s Pearl Street Station in Manhattan — used coal to create steam beginning in 1882. Several hydropower plants came online in the late 1800s, but coal technology continued to develop and overtook wood as our primary energy source by the turn of the century.

While the overall energy history of the United States is one of significant change as new forms of energy were developed, the three major fossil fuels [petroleum, natural gas and coal] have dominated the U.S. fuel mix for well over 100 years,” EIA said.