From Our Readers: Thoughts on Solar and LEDs - Carolina Country
Viewpoints
April 2016

From Our Readers: Thoughts on Solar and LEDs

April's letters to the editor 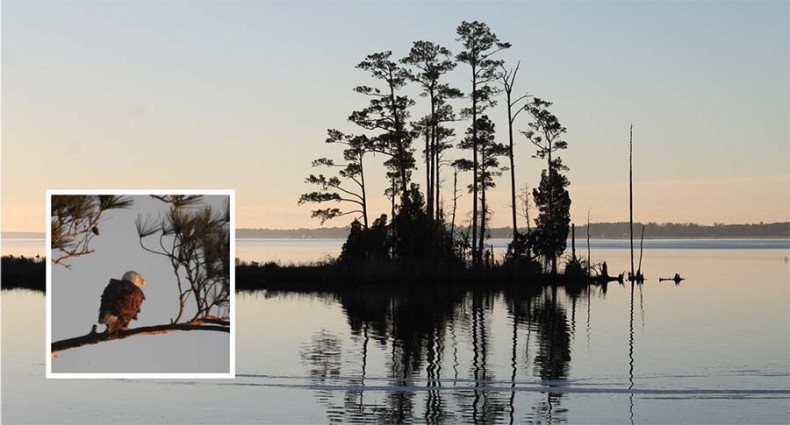 My wife and I bought a vacation home on Duck Creek, along the Pamlico River, in July 2015. We have been watching a pair of Eagles land in the tall trees across the water on Sandy Point almost every morning and sometimes in the afternoon. They are there for an hour or so looking for a meal each time. My wife gave me a telescope for Christmas, and I added a camera mount to it. In late January, while still learning to use my telescope, I lined up on the tree branches the Eagles use and waited. Only one showed up. The light was wrong for the photo (facing east). The Eagle came back that afternoon and I got a few pretty decent pictures. Maybe next time it will land facing our house. I’m still looking for a better picture to blow up and hang on our wall.

No warmth in LEDs

The article on LED lighting in the February 2016 issue [“Try This! LEDS are making headway”] is very informative, but leaves out one consideration that may be undesirable to many users. When dimming LED lights, they maintain the same color temperature as they emit when they are fully on. Therefore, the “warm glow” that you can achieve with incandescent bulbs cannot be duplicated by dimmed LED bulbs. They simply put out less light, so the effect is very different and not desirable in many situations.

While I enjoy reading most of the articles in Carolina Country, I am distressed at reading the letter posted by Ken Jobe [Viewpoint: “A new path to electricity,” February 2016].

I often read articles giving members advice on how to save on their electric bills — often lowering comfort levels to have lower bills or buy different equipment to affect the same.

As you should know, buying energy-efficient equipment is often expensive and pay back is usually for an extended period, making that cost prohibitive for a lot of people. So, the outcome is, be miserable and pay a big electric bill.

Mr. Jobe endorses a man-made cause for global warming and cessation of burning fossil fuel to generate electricity. I would hope Mr. Jobe would check the facts that are so frequently misquoted to support his position. I would hope Mr. Jobe, occupying his position, would be a little more favorable to lowering our costs by using the technologies we have and not using “new technology” until we actually have it. He can influence, on a personal basis, searching for his new path all he wants. Right now he has the duty to manage production of electricity as efficiently as possible. I would think that would be using natural gas and nuclear for generation. Not so much wind and solar.

In the “Solar Panels” letter in Viewpoints [March 2016], Mr. Butterworth offered his opinion on solar panels as a response to an earlier submission on coal. I felt it very necessary to provide some information to counter those opinions.

First, I would point out that listing all the hidden costs in coal due to emissions and health issues without mentioning anything about the pollutants and emissions from the manufacture of the solar panels is a bit hypocritical.

Second, I would agree that solar is pollution- and carbon dioxide-free (outside the manufacturing process) as long as the sun shines, as pointed out by Mr. Butterworth. However, the sun doesn’t always shine, just typically anywhere from eight to 12 hours per day, depending on the season. Until we have better solutions for storage of the energy produced during the daylight hours, we cannot sustain a continued supply of uninterrupted power.

Now about the costs. The reasons the cost is competitive with current forms of electricity production is two-fold. First, the government is propping-up the solar industry with tax credits. Secondly, the utilities are required to buy back the extra production at retail rates. The problem with that is the solar panel owners incur no costs for maintaining the transmission lines and equipment. The writer even stated solar is cheap if we have policies that help with upfront costs. If solar were treated on a level playing field with the other forms of electricity production, it would not be cost effective. Hence, the mandate by the state on percentage of new generation required as renewables. Ever wonder why your electric bill is a little higher these days, you can thank these government mandates. Efficiency may be improving but it is still sub-par and unsustainable.

Editor’s note: North Carolina no longer offers a tax credit for renewable energy projects, but the federal government does. The N.C. tax credit expired for most projects at the end of 2015. Also, not all utilities are required to purchase power at the retail rate from all renewable projects.