A complete system for preventing lightning damage - Carolina Country
Your Energy, Your Future 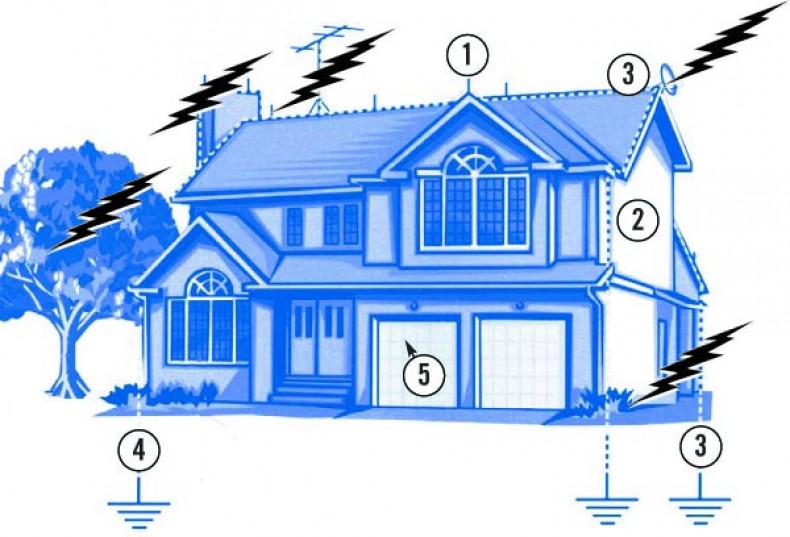 In addition to the threat of death or serious injury, a lightning strike to an unprotected home can be disastrous as well. Packing up to 100 million volts of electricity, lightning's destructive electricity can explode brick, ignite roofs, sidewalls, framing and induce harmful electrical surges that can destroy sensitive electronics. To prevent this kind of damage to a structure, a complete lightning protection system is the best way to dissipate the dangerous electrical discharge. This system is different than the surge protectors you plug in for computers and HD TV. Surge protectors will not protect your equipment from a lighting strike, only against electrical line surges.

How the system works

The system provides a network of low-resistance paths to safely intercept lightning's dangerous electricity and direct it to ground without impact to structure or occupants. The system neither attracts nor repels a strike, but receives the strike and routes it harmlessly into the earth. Surge protection devices (SPD) must be incorporated to provide a barrier against transient surges.

A complete system includes strike termination devices (lightning rods), down conductors, bonding, grounding and surge protection for an electrical panel or meter, along with surge protection devices for telephone, cable, satellite, electrical lines and communication systems entering the structure. Materials and equipment should be UL-listed and properly labeled.

Lightning protection is not a do-it-yourself project. Complete systems must be designed and installed in accordance with accepted industry safety standards of the Lightning Protection Institute (LPI), National Fire Protection Association (NFPA) and Underwriters Laboratory (UL). Only experienced UL-listed/LPI-certified contractors or qualified electricians should install the systems. These qualified specialists use UL-listed materials and ensure that installation complies with the above safety standards. To find certified installers in your area, visit www.lightning.org.

—National Oceanic and Atmospheric Administration and the Lightning Protection Institute, a nationwide not-for-profit organization based in Richmond, Va

When outdoors, take cover when you hear thunder

Data from the National Weather Service show that lightning strikes are fatal in approximately 10 percent of strike victims. Another 70 percent of survivors suffer serious, long-term effects.

Outdoors is the most dangerous place to be during a lightning storm. The Electrical Safety Foundation International recommends these guidelines to stay safe:

If possible, go indoors. Once indoors, stay away from windows and doors. Do not use corded telephones except for emergencies.

Unplug electronic equipment before the storm arrives and avoid contact with electrical equipment or cords during storms.

Avoid contact with plumbing, including sinks, baths and faucets.

If outdoors, go to a low point. Lightning hits the tallest object. Stay away from trees.