Connections to the Past - Carolina Country
Feature Story
September 2022

Connections to the Past 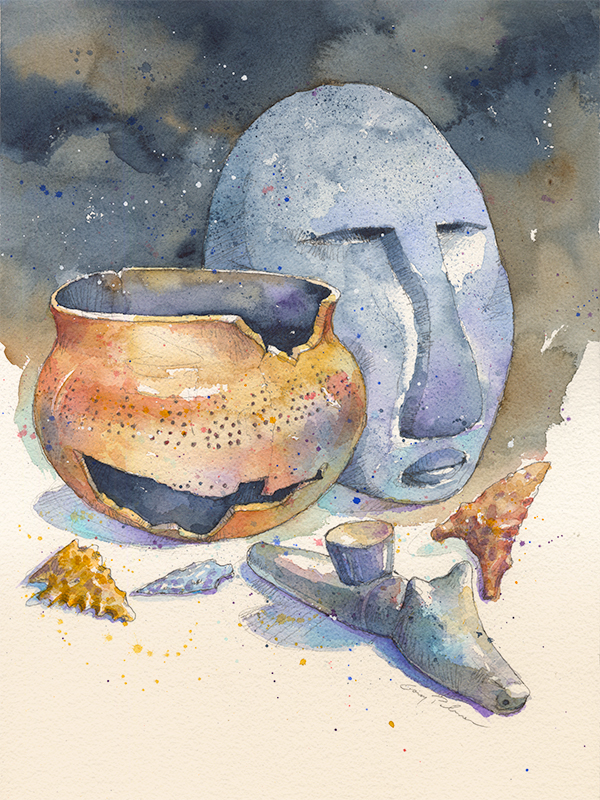 Click on image for more information about each of the artifacts.

In 1951, at the age of 10, Ron Harris found his first arrowhead. Featuring a pointed tip, flaked scars and composed of fine-grain rock, he immediately knew what lay in his palm. Today, Ron, who lives in Taylorsville and is a member of EnergyUnited, has a vast collection of Native American artifacts — some discovered, some traded and some significant, like his collection of stone Clovis points dating back 10,000 to 12,000 years, which denote the earliest inhabitants of present-day North Carolina.

“The Clovis is the oldest and earliest prized Native American point. They’re very hard to come by,” Ron says. He has 50 of them.

For someone like Dr. Randolph Daniel Jr., who chairs the anthropology department at East Carolina University in Greenville, these finds by private collectors can link to “diagnostic projectile points” (a variety of pointed tools for different uses). In this way, private collectors and archaeologists can work together. Detailing the locations of finds helps archaeologists discover excavation sites, learning the how and why of early inhabitants.

The Hardaway archaeological site, situated in the Uwharrie Mountains outside of Badin, inspired Randy’s Ph.D. dissertation. Hardaway is the oldest excavated site in the state. Artifacts found here indicate occupation that could date to the Paleoindian Period (9,500 – 7,500 B.C.), and the original excavator, the late Dr. Joffre Coe, wove together chronologies of consistent settlement. Randy has re-examined much of the Hardaway material, which serves as a guidebook for identifying similar artifacts across the eastern United States.

In Gilead, Town Creek Indian Mound was settled as we know it today between the years 1000 to 1150, and has undergone consistent archaeological research for more than half a century. The Pee Dee people flourished there as part of the South Appalachian Mississippian culture, a regional civilization that shared cultural traits including earthen mounds, widespread trading and religious ceremonies.

“We see Pee Dee pottery at other sites in the region, but feel the majority of it was made here or at the villages around Town Creek,” says Rich Thompson, Site Manager of Town Creek Indian Mound. “These people were living a woodland lifestyle and experimenting with gardening. We also have jewelry made with shells from the coast, Mica elements from the mountains, and copper, which I was told came from the Great Lakes area.”

It's only natural to wonder how these materials wound up here, and Rich describes it as a highway system composed of waterways. Canoes allowed Native Americans to establish trade routes. While goods were swapped, the rocks that make up the Uwharrie Mountains were the preferred stone for toolmaking, significant to both Town Creek, Hardaway and beyond.

Due to vast Native American settlements throughout North Carolina, objects are still waiting to be unearthed. But with slightly differing goals, there can be friction between archaeologists and private collectors.

“The perspective of professional archaeologists is stewardship; for collectors it’s ownership,” Randy says. “The main question is, who owns the past?”

He encourages collectors to keep detailed records of their findings, such as numbering artifacts to coincide with GPS points. Both seasoned and novice collectors can benefit from Piedmont Archaeology Society meetups, which provide opportunities to buy artifacts and form connections.

“These meetups are also great for meeting other collectors, and sometimes you can even buddy up with people and they will invite you to go on [pre-approved] excavations,” Ron says.

For novices, it’s important to remember objects found on state land belong to the state. Most artifacts that belong to collectors have been found on their privately owned property or purchased at meetups. If you’re unsure where to start, a tip of advice is to look on riverbanks.

“Throughout time, these societies have been set up within a short distance of fresh, moving water,” Rich explains. For him, the thrill of excavation — for both hobbyists and professionals — revolves around one central theme. “If you’re the person in the trench, you could discover an artifact that hasn’t seen the light of day in thousands of years. It’s a connection to the past and a feeling of knowing you’re the next in line to have contact with that artifact. It creates a fellowship.”