For more than 50 years, U.S. electric cooperatives have shared their expertise with world communities that have needed it most

By Zuraidah Hoffman | All photos by NRECA International

In the late 1930s, rural communities in the United States experienced something for the first time — electric power. Neighbors formed their own cooperatives to make electricity not only a possibility, but also a means of prosperity for their farms, houses, schools, hospitals and businesses.

Cooperatives later extended the same energy to help communities around the world that had no electric power. In 1962, President John F. Kennedy signed an agreement of cooperation between the National Rural Electric Cooperative Association (NRECA) and the U.S. Agency for International Development (USAID), to create NRECA International. Since then, the 250 rural electrification programs that NRECA International has established in Latin America, Africa and Asia have provided more than 110 million people in more than 43 developing countries with access to safe, reliable and affordable electricity. These efforts continue to be made possible with generous funding and support from USAID and multilateral development banks.

Currently, NRECA International is helping more than 42,000 people in Haiti, 7,000 in Tanzania, 4 million in the Philippines and more than 500,000 in Uganda. Behind these numbers are families and communities who are beginning a better life. Streets are made safer by streetlights; studying and reading isn’t limited by daylight; doctors can utilize more equipment and access more medicine thanks to refrigeration; and irrigation techniques have improved with the help of powered water pumps.

As the dust settled in Haiti’s capital Port-au-Prince on the evening of January 12, 2010, a landscape of devastation began to emerge. The 7.0-magnitude earthquake that struck just before 5 p.m. had reduced most of the densely populated city and surrounding villages to rubble. Some 230,000 people died. Another 300,000 were injured. And more than a million were left homeless.

The team focused first on restoring power to critical facilities such as hospitals, relief centers and refugee camps. Less than a month later, an EdH-NRECA team had restored a 69-kilovolt line, the first reenergized grid power since the quake.

Following the success of the emergency response team, EdH requested that NRECA International continue its support. Under the sponsorship of the World Bank, the team coordinated reconstruction efforts and mentored EdH engineering personnel, including providing safety training to more than 100 local linemen. 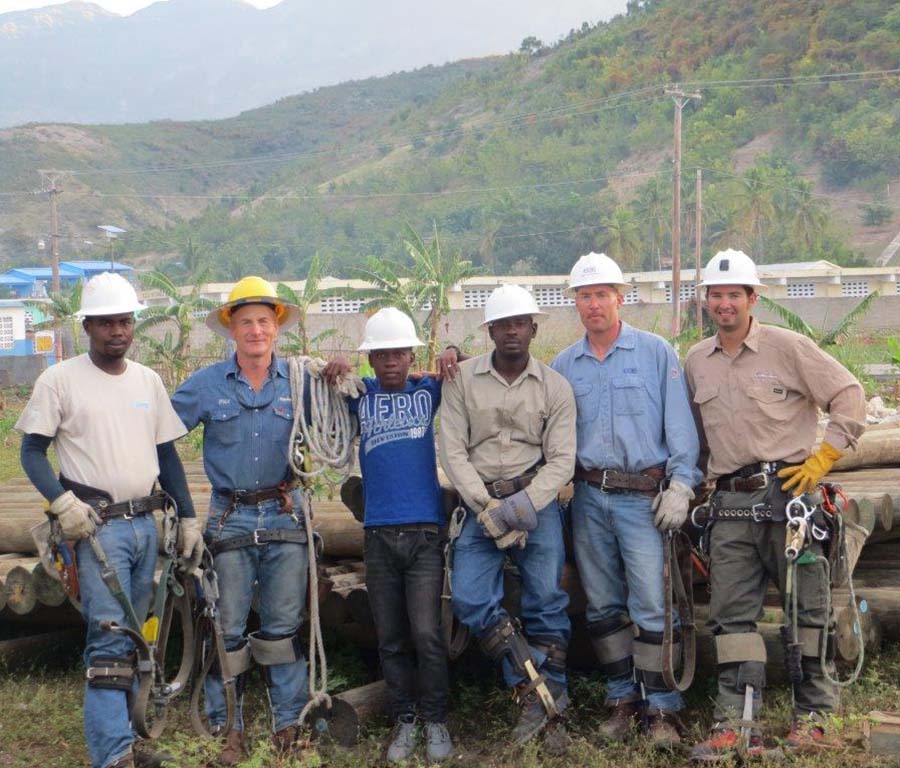 It starts with power

Since then, in northern Haiti, about 36,000 people live and work in towns where they have access to 24/7 electricity, which was not the case two years ago. Today, a new power plant, a more effective distribution grid and power lines, and an established private utility — all managed by NRECA International — provide power to five towns and more will be added soon.

Since electrification a year ago, the community is getting used to the changes, starting with the schools. “If we did not have electricity, our technology room would not have been in operation because there is a need to charge about 35 laptops on a regular basis,” said Jean Mirvil, headmaster of the S&H School in Caracol.

“One could rarely go a day without receiving the news of an event of a shop being robbed in one neighborhood or another,” said Gary Michel, a community leader from Trou Du Nord. “Today, thanks to the establishment of the electric light, residents are no longer closing their doors at 7:30 in the evening as they did in the days of darkness.”

“The medical equipment is working with electric energy! That has been a huge event,” said Dr. Rolando Garcia, a doctor at the hospital from the same town. “The hospital is now full of patients waiting to see their doctors; before there were no patients at all.  Now they come because they know they are going to get an x-ray, an electro cardiogram, get ultra sound treatment.”

In the southwestern region of Haiti, NRECA International helped establish the country’s first electric co-op. During last year, 28 volunteers from 25 NRECA member cooperatives traveled to Coteaux to help more than 6,000 residents benefit from 33 miles of new or upgraded power lines. When the solar-diesel hybrid power system is completed this year, many people in these communities will turn lights on for the first time.

Every day, NRECA International’s team of engineers, economists, country directors, volunteers and doors continue to make these connections to help communities step out of subsistence living and onto a more equal playing field with the rest of the world.

Learn more
To learn how NRECA International improves the quality of life for people around the world, visit nrecainternational.coop, send an e-mail to international.foundation@nreca.coop or call (703) 907-5645.

Zuraidah Hoffman is the communications manager for NRECA International, and writes on international affairs for the National Rural Electric Cooperative Association, the service arm of the nation’s 900-plus consumer-owned, not-for-profit electric cooperatives.