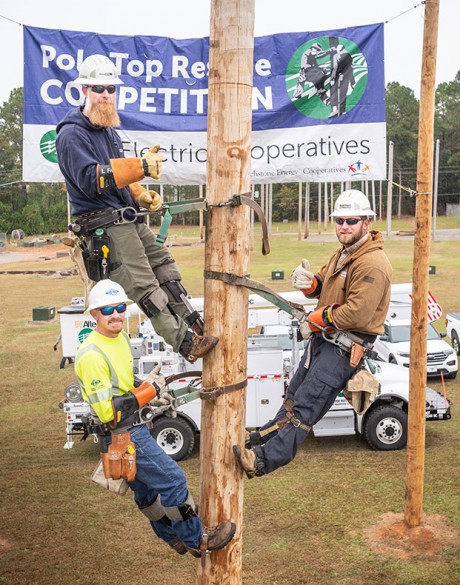 In November, North Carolina’s top electric cooperative line-workers assembled at Nash Community College in Rocky Mount to compete for the title of State Champion in the 2021 Pole Top Rescue Competition.

The biennial competition pitted lineworkers against the clock and each other as they demonstrate essential lifesaving skills and provided an up-close look at the speed, technique, and safety knowledge required to maintain the lines that power the lives of electric cooperative members. To advance to this state championship, each competitor had to win a similar competition at their local cooperative.

During the competition, each lineworker executed a scenario in which a coworker is unconscious atop a utility pole. The competitor, dressed in full climbing gear, had to radio for help, scale 20 feet up the utility pole, lower a 105-pound mannequin (nicknamed “Kool”) and begin lifesaving procedures. All North Carolina electric cooperative lineworkers must complete this same scenario in less than five minutes to maintain their certification to work on electric co-op lines.

“This championship highlights just how rigorous and challenging it is to be a lineworker,” said Louis Duke, spokesperson for North Carolina’s Electric Cooperatives. “These highly trained individuals play a critical role in co-op operations, and we can’t thank them enough for the vital service they provide to our members and communities.”

See the winner in action

Congratulations to 2021 Pole Top champion Levi Fagan whose time was 1:53.37. Levi has been with EnergyUnited since 2014, working in the Lake Norman region. His father, who has also enjoyed a storied career as a lineworker, is one of Levi’s greatest role models. Levi enjoys many aspects of his job, but the most meaningful takeaway has been the positive impact he has had in his community. Levi resides in Troutman with his wife, Stacey, and son, Hudson.