Call collecting can add to the turkey hunting experience

At first blush, Craig Koefler and Ken Mummert don’t seem cut from the same cloth. Ken, 57, was born in Pennsylvania, lives in Wake Forest and works in printing sales. Craig, 72, was born in Ohio, lives in Raleigh and is retired.

But they do share a few common bonds. A love for hunting and fishing in general, and turkey hunting in particular. And, as an offshoot of that, an avid interest in turkey call collecting. I asked Ken how he got interested in call collecting.

“I just found that the turkey calls were very interesting at an early age,” Ken says. “My family turkey hunted up in Pennsylvania, and they would use little box calls, or peg and slate calls. It was my first exposure to them and I was just fascinated that you can actually call a turkey with these things. And so I started buying them and ... You know, the goal wasn’t to collect, but eventually I just accumulated enough calls that it started becoming a collection.” 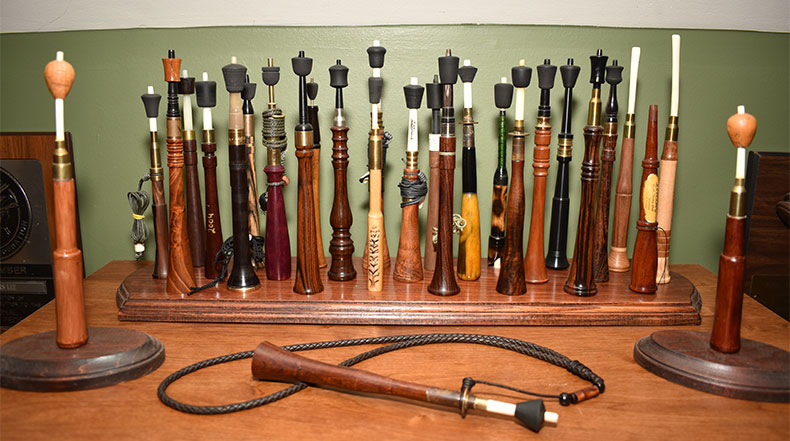 Craig took a different path to the same destination.

“I got into it because I wasn’t happy with the ‘production calls’ that you could buy in stores,” he explains. “And once I found out about call makers, I found there was a huge community and there was a lot of camaraderie and a lot of sharing of knowledge. That’s how I got into it.”

For the uninitiated, turkey calls are used in the spring to call male turkeys (aka toms or gobblers) in range of the hunter, who uses the call to sound like a love-sick hen (there are calls that mimic male turkeys, too). Vocalizations include yelps, putts and purrs, among others. The most common types of calls are box calls, slate/friction calls, trumpet calls (in which one employs suction to create sound), push pin and scratch calls. There are also diaphragm mouth calls which are made of latex and plastic, but they are not really collectible. 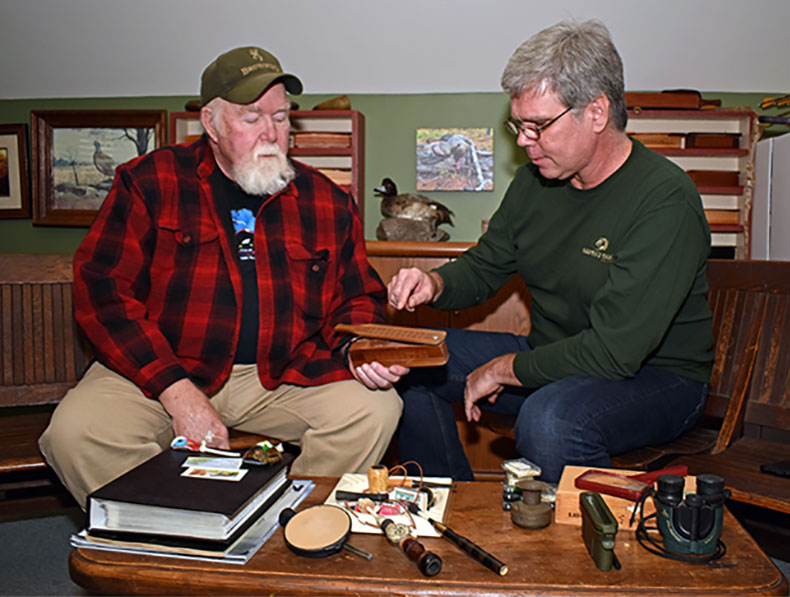 Just like any other type of collecting, one can go just about as deep into it as one wants. At one point Ken had over 1,000 calls in his collection, but he’s “whittled that down” to about 500. Ken also makes and sells his own design of a yelper-type call from local river cane. Craig’s rough estimate is about 650 in his collection.

What makes a call valuable? Different things. Scarcity is a main component. Artistic detail can be quite exquisite and add value. Some specialize in certain types of calls, some concentrate on individual makers. Some concentrate on early commercial production calls. There are some “holy grail” calls out there. The Charles Jordan yelper from the turn of the century (late 1800s to early 1900s) is one because there are only about five known to still be in existence. Ken said they are hard to place a value on, and cited “priceless” as a price tag. When asked about a ceiling for collectables, both collectors cited a Neil Cost “Fat Lady” box call that sold for about $25,000.

Resources for those interested in call collecting include the Facebook group Turkey Call Trader/Collector (Ken is an administrator for the group). The book “Turkey Calls: An Enduring American Folk Art” by Howard Harlan is considered a top reference book.

“I think it’s important that people who have an interest in [call collecting] pursue this, because this is an extension of the heritage of hunting,” Ken says. “I encourage people to research their calls and learn a little bit more about them.”

North Carolina’s turkey hunting season lasts five weeks in April and May. Turkey call collecting lasts 12 months. But pursue at your own risk. When asked about his experience, Craig hesitated and said simply, “It’s a disease.”