The crowd gives an appreciative cheer as horse and rider enter the competition arena. They then grow quiet, almost a collective holding of breath, as the horse begins its gallop and sails over obstacles as high as five feet. Pure grace and athleticism are on display. As the duo completes its run, the crowd erupts into cheers and spectators from the rider’s home country proudly wave their country’s flag. 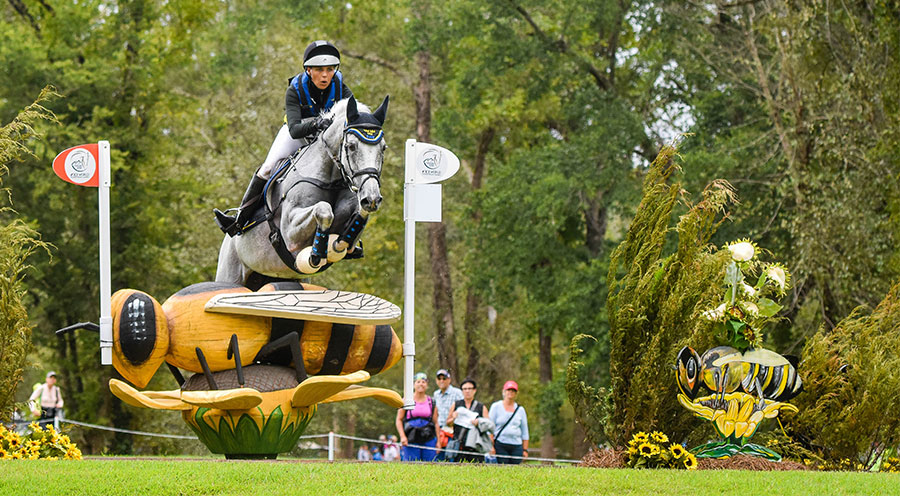 The World Equestrian Games, sometimes called the horse Olympics, put North Carolina in the international spotlight last September with the games being hosted at the Tryon International Equestrian Center in Polk County. Many of the athletes were vying for spots at the 2020 Tokyo Olympic and Paralympic Games during the 13-day event.

The quiet, bucolic setting of the Blue Ridge Mountains was transformed into a thriving international village, a reminder that people from around the globe enjoy friendly, yet serious competition and a good time. Numerous languages (68 countries were represented) could be heard as fans gathered to watch athletes and their exquisite animals compete. Crowds hopped on shuttles as they hustled from one arena to the next to catch a favored event or to stop at rows of tents that made up the marketplace with equestrian-themed goods and wares from around the world.

Tiny Tryon stands in stark contrast to the cosmopolitan cities that have hosted the Games in the past. The governing body of the Games, Federation Equestre Internationale (FEI), had always selected European cities: Stockholm, Sweden; The Hague, Netherlands; Rome, Italy; Jerez, Spain; Aachen, Germany; and Normandy, France. The only other time the Games have been held outside Europe was in Lexington, Kentucky, in 2010.

The 2018 Games presented an opportunity for a large swath of western North Carolina to showcase the state’s beauty and hospitality. Even the eventing course, designed by Capt. Mark Phillips—a British gold-medal-winning horseman and the ex-husband of Princess Anne—gave a nod to many of the unique features of North Carolina, such as the Cape Hatteras lighthouse and the Hendersonville apple growing region, by incorporating iconic symbols as part of the jumps.

Safely bringing hundreds of horses and hundreds of thousands of participants and spectators (an estimated 250,000 people) to rural Polk County took careful planning and coordination.

“One of the biggest logistical efforts was bringing in all the horses from all over the world,” explains Michael Stone, president of the World Equestrian Games Organizing Committee. That entailed airlifting 530 horses from six different continents. Another 197 horses traveled over land.

Michael says it required 380 staff members, nearly 400 ancillary staff and 1,700 volunteers to pull off the Games. Nearly 800 veterinarians were on-site checking horses before, during and after competitions, overseeing USDA quarantine requirements or representing competing federations.

Because of the numerous countries represented and the anticipated crowds, the Department of Homeland Security, the FBI, TSA, the State Highway Patrol and the Polk County Sheriff’s Department worked together. Fire, emergency medical services and public health departments also were involved. 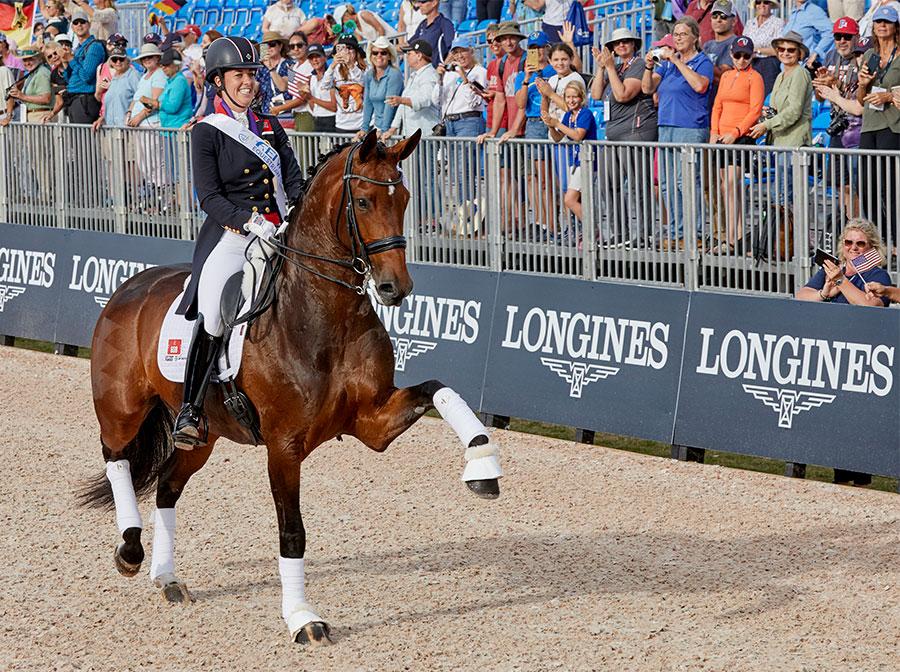 As the venue was making preparations, Rutherford Electric Membership Corporation, which serves the entire Equestrian Center complex, developed its game plan for handling increased demand during the Games. Tom Haire, system engineer, says the venue needed additional electrical service, and Rutherford EMC supplied that as well as anticipating and preparing for any unforeseen circumstances.

“We staged material for quick response, had a dedicated on-call crew and staffed more people in the office to respond to calls more quickly,” he says. “We had most of our outside force available as well.”

Tom and the engineering department went to construction meetings every week in the months leading up to the event and also met with the emergency services team working the event. “We went through with our right-of-way crews. We looked at poles and verified back feeds.”

During the Games, Tom walked through the venue periodically to verify load and to check transformers to ensure there wasn’t something that might cause a potential failure.

“We did an infrared shot on everything in the complex with our infrared camera,” he says. An infrared camera helps detect hot spots and uncovers potential problems that might cause an outage.

Even with the venue’s best-laid plans to accommodate a large crowd, Hurricane Florence served as a major disrupter, as it was bearing down on the Carolina coast just as the games were beginning. While heavy rains and flooding affected one competition day, the event was largely spared. When it comes to the electric service, “we never once blinked the lights,” Tom says. 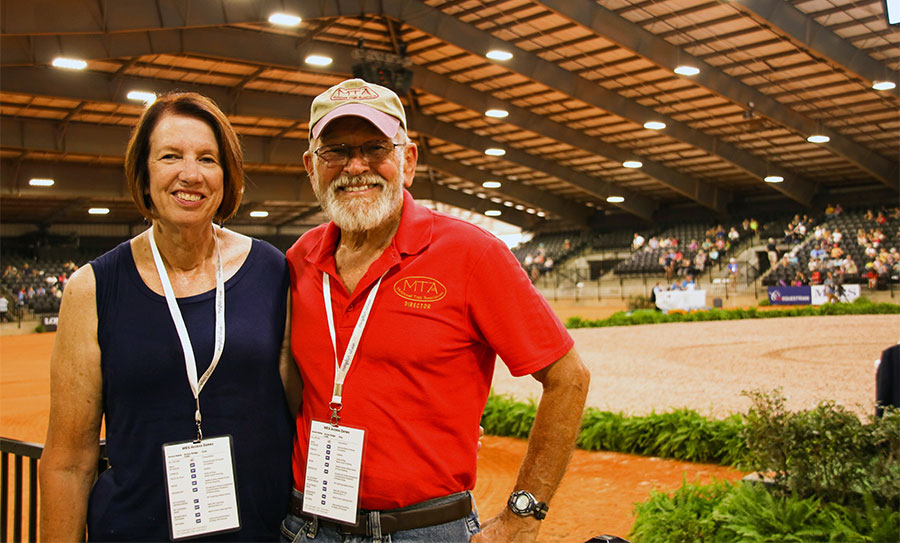 Oscar and Joyce Creech of Marion volunteered at the event. Photo by Leah Chester-Davis.

An experience of a lifetime

Oscar and Joyce Creech, of Marion, about 40 miles from the venue, volunteered for several days greeting guests and driving shuttles. When they weren’t volunteering, they enjoyed watching the various competitions.

“This is the biggest thing that has ever happened to western North Carolina,” Oscar says. “We just wanted to come down and be a part of it. We like to get out and promote our community and the rest of North Carolina.”

Some highlights for them were meeting people from around the world.

“It’s been so exciting to watch the events,” Joyce adds. “We watched the reining competition in this arena and the United States won gold. To see them raise the American flag…” her voice trails off as the emotion of that moment hits her again.
Cade McCutcheon, of Texas, the youngest competitor to ever make the U.S. Reining Team at age 18, was on the medal stand when the significance of the win hit him. 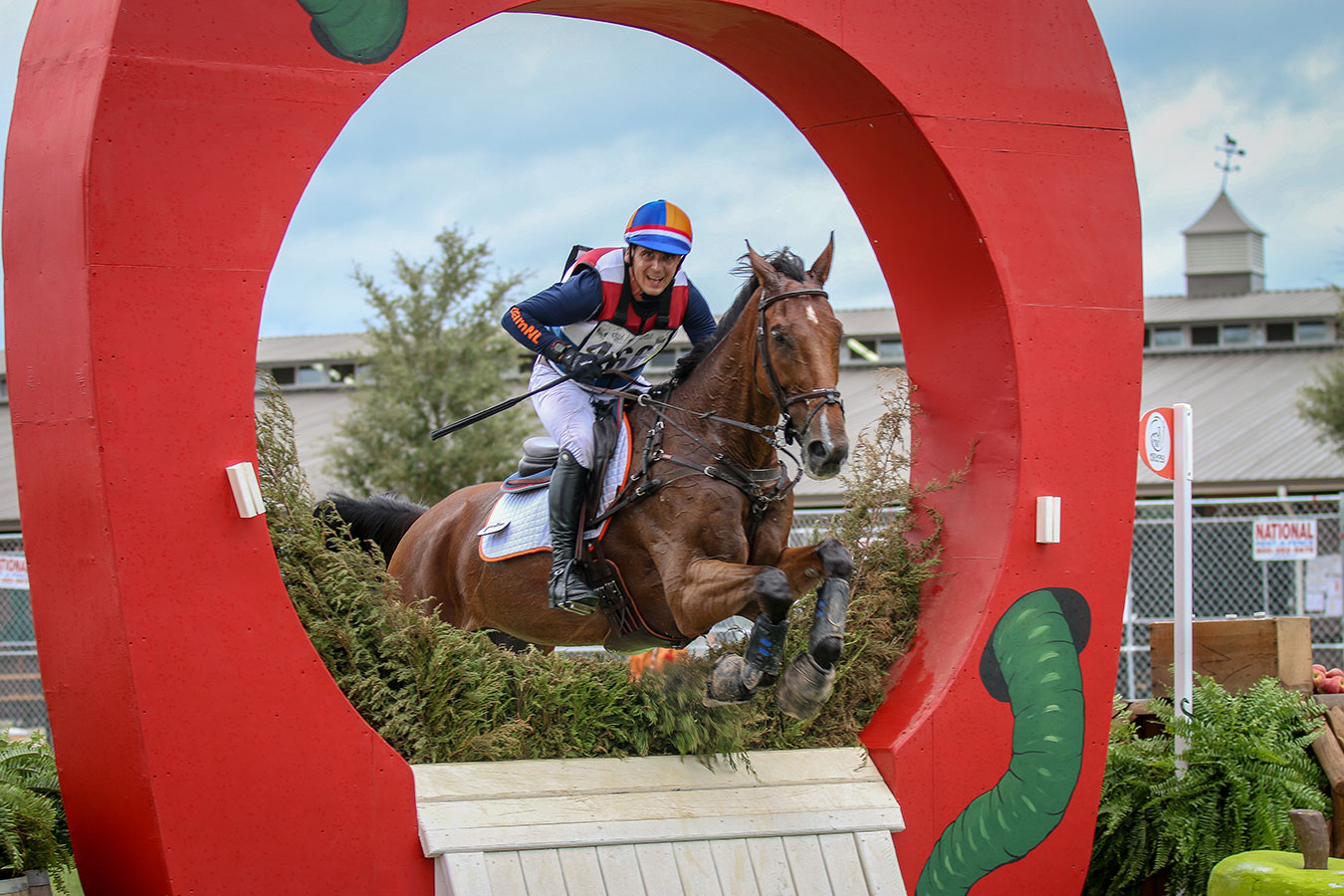 The design of the eventing course jumps gave a nod to many of the unique features of North Carolina, such as the Hendersonville apple growing region. Photo by TIEC.

“It was unreal, something I’ll never forget. Standing there, and when they played the national anthem more than anything, that was the best moment of the whole week,” he says.

Competitors included Olympians, world champions, sheiks, princes and teenagers. In addition to the U.S. Reining Team, the U.S. Jumping Team won Gold in a thrilling competition to close out the event.

Tryon on the world map

Despite the challenges of dealing with a hurricane, unseasonably hot temperatures, high humidity and race snafus, organizers closed the games on a high note.

Michael Stone says one of the most pleasant aspects of the games was North Carolina’s hospitality.

“The people of the region really took it to heart and did an amazing job of making all the foreign competitors and teams feel so welcomed. That was fantastic.”

“These games were the opportunity to get this venue on the world map and to really show what we have the ability to do,” says Sharon Decker, chief operating officer for Tryon Equestrian Partners, Carolina Operations, and a member of the organizing committee.

Sharon served as Secretary of Commerce for two years during Governor Pat McCrory’s term. “The compelling thing for so many of us who are involved is the opportunity to grow not only equestrian sport in our country and to create the premier location for equestrian sport, but it’s the job creation and the economic development this brings to this region.”