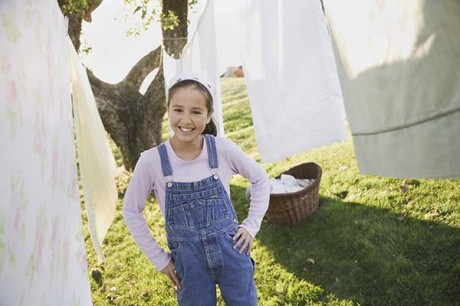 Mama’s washing machine was the old wringer type. I don’t really know how it worked, but it involved hoses for filling from the bathtub and draining into the bathtub. I seem to remember clothes soaking in the bathtub, too. Probably those were the whites that needed bleach or bluing. While she did the laundry, Mama banned me from the bathroom, fearing I would put a finger into the wringer or some such horrible accident.

But I remember very well how the solar dryer operated. One of my chores when I was a little girl was to help Mama bring the clothes in from the clothesline. Mama took down the big things like sheets and long pants. Then she moved the “clothesline stick” to lower the smaller clothes to my reach. The clothesline stick measured one-by-two inches, about six feet long, and was notched at one end. A forked tree branch worked just as well. The weight of the wet clothes made the line sag in the middle. You fit the notch to the line and pushed the stick forward until it raised the sagging line high enough to keep sheets and long clothes off the ground.

Mama taught me how to put clothespins in the pin bag that hung on the clothesline and to shake off ants that sometimes marched in a line across clean clothes. I learned to fold the clothes before putting them in the basket to keep them from wrinkling. (There were no permanent press fabrics then.) Mama sprinkled the clothes and stored them in the refrigerator until she did the ironing the next day.
Once I was tall enough, Mama assigned me to hang and bring in the sun-dried clothes all by myself. The clothesline was also an interesting place for a little girl to play. My imagination turned the billowing sheets and towels into ship’s sails or walls of my imaginary house. A blanket or quilt hanging across the line, half on one side and half on the other, provided good cover in a game of hide-and-seek or became a teepee. Just as often, I was shooed away from playing in the clean clothes with my grubby little mudpie-making hands.

I was fascinated by the “mosquito hawks” that lit on the line, sometimes a half dozen at a time. You may know them better as dragonflies, but Mama called them “mosquito hawks.” She told me that they were good insects, because they ate mosquitoes. With their iridescent wings, nodding heads and big bulging eyes, dragonflies became my favorite bug. I learned to catch them to get a closer look, holding them by a pair of transparent wings in each of my hands, feeling them flutter in my fingers, and then letting them go. Here is a little piece of advice on catching dragonflies: Never catch them by the tail. If you do, the dragonfly will curl its long body to reach your finger and bite you. I learned that by experience.

As I got older, I began thinking of bringing in the laundry as work and turned to disliking it. Fortunately, as my infatuation with the clothesline waned, a “Laundromat” came to our hometown. Mama got rid of the old wringer washing machine and took our laundry to Mr. Allen’s Laundromat. There she dropped coins in the slots of the automatic washing machines and electric clothes dryers to do our laundry. She brought extra coins for the snack and drink machines.

I didn’t hang or bring in laundry again until I was a young married girl. We bought a used washer, but could not afford a dryer. Once again I made the trips back and forth to the clothesline, letting the sun dry our clothes for free.

Besides saving energy and money, drying on the line causes less wear and tear on clothes than tumbling them in a hot dryer. The sun serves as a natural antibacterial agent, further sanitizing the laundry. And you are out there getting vitamin D from the sun, exercise from walking and hanging the clothes, and the joy of being outside close to nature.

Today, unfortunately, some neighborhoods consider clotheslines an eyesore. Before you install a solar-powered clothes dryer, be sure your homeowners association permits it. There is a movement to outlaw bans on clotheslines, as we become more environmentally aware. Several states have passed laws barring a neighborhood from banning clotheslines. North Carolina does have a solar access law that protects a homeowner’s right to use the sun’s energy, but it doesn’t specifically protect clotheslines.

Yes, I have an electric clothes dryer. With a five-person household, I really do not want to go back to the “good old days.” But I live in the country and do have a clothesline in my backyard. I think I’ll start hanging out the linens just for old time’s sake