Sessions focus on how co-ops are leading the energy future

Roanoke Electric president and CEO Curtis Wynn kicked off the meeting from the main stage. Photo courtesy of NRECA.

Leaders from electric cooperatives in North Carolina joined peers from around the country in February at the annual meeting of the National Rural Electric Cooperative Association (NRECA) in Nashville. More than 6,000 attendees gathered for training and education, comparing notes on how electric cooperatives are utilizing new technologies to better serve their members.

Building for the future

Curtis Wynn, Roanoke Electric Cooperative president and CEO, kicked off the meeting from the main stage. Wynn currently serves as vice president on the NRECA Board of Directors. He recognized members of the board, and past presidents for their service and the legacy they have created, as well as international guests representing six countries.

“One way to think about legacy is not necessarily what you have done, but what you are building for the future,” Wynn said. “Our meeting’s theme this year concentrates on how cooperatives lead the future of energy. That leadership extends beyond America’s borders.”

The international arm of NRECA has developed and implemented electrification programs across the globe for more than 50 years, bringing electricity to more than 126 million people in 43 developing countries.

NC in the spotlight

North Carolina was represented throughout the agenda.

In his address to the crowd, NRECA President Phil Carson described the work of electric co-ops, through their storied past and all future work for members, as a movement.

“The electric cooperative movement belongs to all of the people we serve today, all the people we’ve served throughout history, and the millions of young people … who are counting on us to make sure the cooperative will still be going strong and relevant to their lives when it’s their turn to chase the American dream,” Carson said. “In a movement, your work never stops. Because the organizations we are building — vibrant civic institutions — can never be finished.” 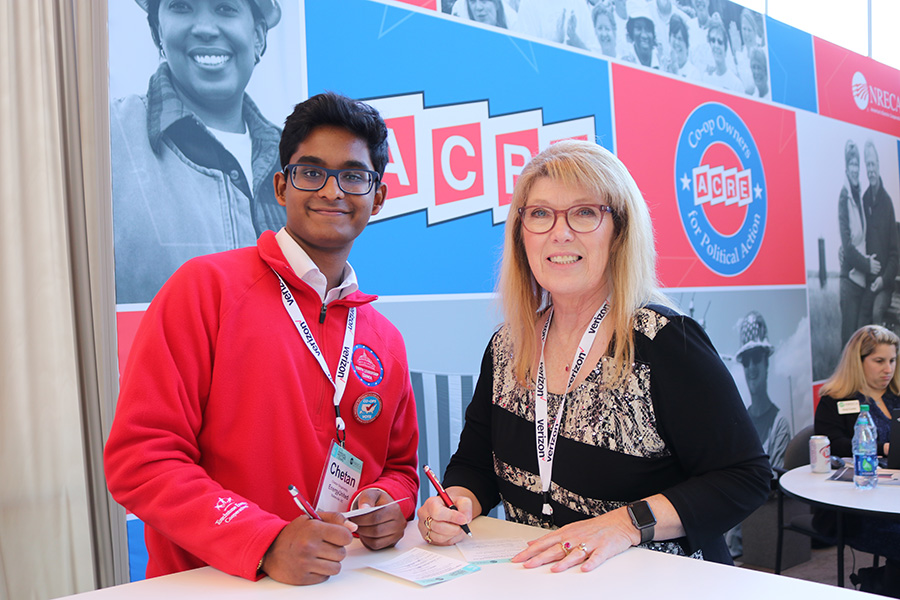 Singalreddy worked with attendees to contact their representatives about issues important to rural communities. Photo courtesy of NRECA.

Singalreddy said his experiences during the trip to the nation’s capital “changed his mind about politics,” something he had not given much thought to before.

“I want to be more involved in politics, even at the local level,” he said. “I really think there is a good potential for change, especially with my generation.”

In meeting students from around the state through Youth Tour and from around the country through YLC, he has been impressed by how diverse and open-minded everyone is. As far as a takeaway message for folks back home, he has thoughts for both younger and older generations.

“If you’re an adult, I would say look for ways to invest more in youth — they are the future. For younger people, look for more ways to be involved, especially with electric cooperatives,” he said. “I really love the community emphasis electric co-ops place on their values. That’s what electric co-ops are really all about: bettering the community.”

Singalreddy is currently a senior at South Iredell High School. Undecided on which college he will be attending, he plans to study computer science and business.