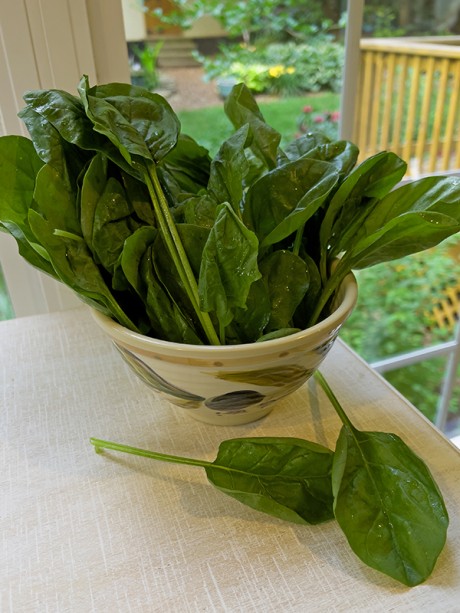 First harvest the older, outer leaves of spinach when they are about five inches long.

Spinach can be grown in either the spring or fall in North Carolina, but since it bolts in hot weather, the best time to plant is now — as summer begrudgingly gives way to autumn, when the warm soil encourages growth, while the coming cool will ensure an extended harvest of tasty leaves.

Like all leafy veggies, spinach thrives on nitrogen. Summer plantings have probably sucked much of the nitrogen from the garden’s soil, so after reworking a sunny growing site, refurbish it further with a generous jolt of 8-8-8 or 10-10-10 fertilizer followed up with an additional, light dusting of these nutrient nuggets in about a month. Don’t want to keep watching your calendar? A single application at planting time of time-release fertilizer high in nitrogen will also work.

Spinach transplants can easily be found now in garden centers and will obviously move up the date of your beginning harvest. In the higher elevations of our state, at this time of year, they are probably the best way to get in a decent crop before hard freezes come calling.

Since spinach is a fast grower, it needs about an inch of water a week to develop properly, so have the hose handy if Mother Nature doesn’t oblige.

For backyard growers fond of slinging seeds— which, by the way, are cheaper than transplants— liberally sow the plants-to-be a half inch deep in rows about a foot apart. When seedlings start appearing, thin the newbie plants to about six inches apart. Use scissors to do the deed because pulling out young plants could disturb the fragile roots of ones left behind.

Since spinach is a fast grower, it needs about an inch of water a week to develop properly, so have the hose handy if Mother Nature doesn’t oblige. Also, mulch will help preserve ground moisture as well as discourage weeds.

When the spinach leaves reach pickin’ size (about five inches long) go for the older, outer ones first. As autumn strengthens, frost will start to creep into the spinach patch, but this won’t be an immediate concern because these hardy plants can withstand temperatures down into the lower 20s. In fact, a light dusting of frost will actually sweeten the leaves just a bit.

As far as which spinach to try, Bloomsdale Long Standing has been a garden standard for years, but for me, its deep crinkles and crannies make this selection tough to wash clean and too friendly for hiding bugs. Instead, I opt for cultivars having smoother leaves, with Teton, Seaside or Space being my usual go-to picks. 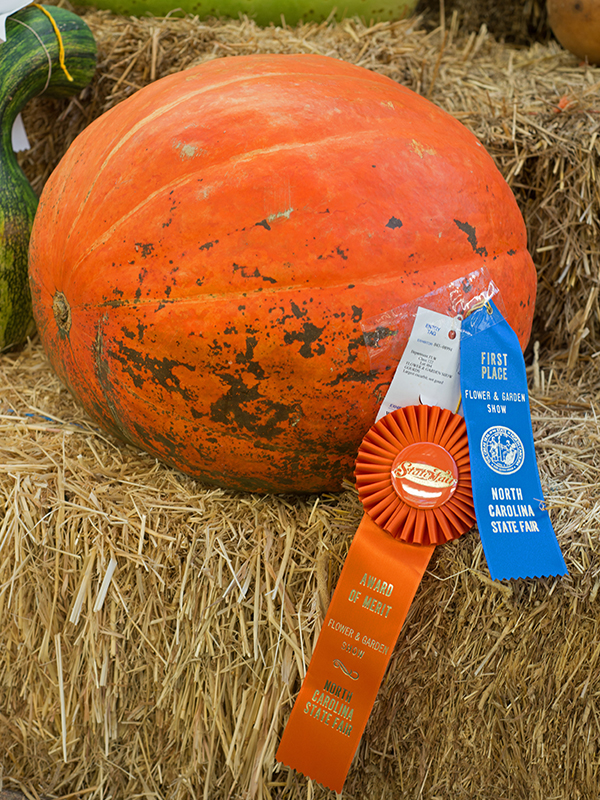 Consider entering the best from your garden at the N.C. State Fair’s Flower and Garden Exhibits’ competitions.

Proud of your garden? Enjoy a little friendly competition? Consider combining these two pleasures by entering some of your best botanical efforts at the NC State Fair’s Flower and Garden Exhibits’ contests in Raleigh.

The Fair will be here before you know it (October 13–23), so look over all your garden ornamentals and produce for possible contenders and start babying them into blue ribbon shape. This includes fruits, vegetables, houseplants, cut flowers and floral arrangements. Visit ncstatefair.org if you want to check out the Flower and Garden competition categories and rules.