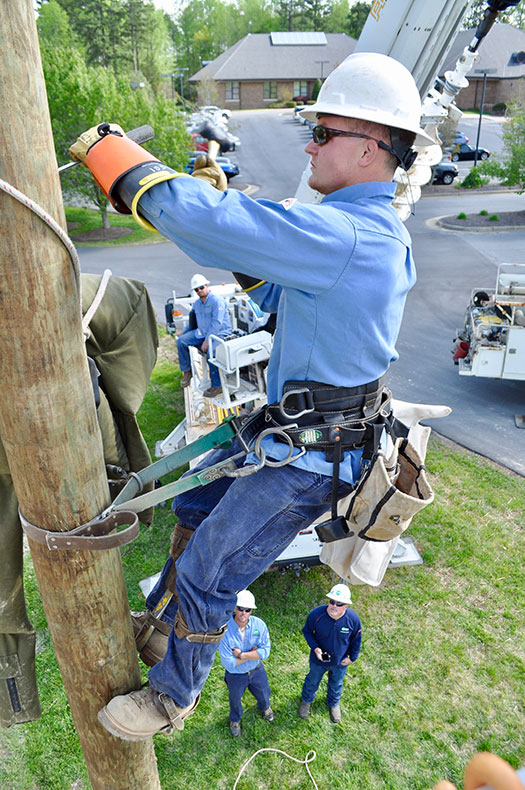 Whitaker will compete against the clock and competitors from other electric cooperatives across the state at this biennial event that showcases lifesaving skills, as well as the technique, agility and safety knowledge required to maintain the lines that power our daily lives. Each competitor won a local competition before advancing to the championship in Raleigh.

During the competition, each lineman must perform in a scenario that finds a fellow worker unconscious atop a utility pole. The competitor, dressed in full climbing gear, must radio for help, climb 20 feet up a utility pole, rig a rope, lower a 105-pound mannequin and begin CPR. Previous winners have completed this rigorous series of tasks in less than two minutes. All North Carolina electric cooperative line workers must execute this scenario in less than five minutes to maintain their certification to work on co-op lines.

Whitaker joined Randolph Electric as an apprentice lineman in 2016. He achieved a time of 2:41 in the local competition held at the Asheboro office on April 19, 2018, which earned him the honor of competing in the statewide championship. In the event he cannot compete, Apprentice Lineman Ryan Kivett, with a runner-up time of 3:11, will take his place to represent Randolph EMC.

To cheer on Austin Whitaker and receive competition updates in real time, follow @NCelectriccoop and @RandolphEMC on Twitter using #ncpoletop.