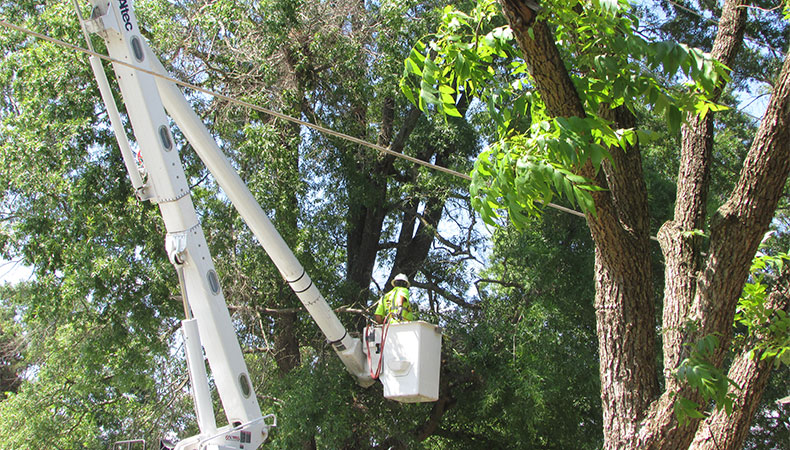 Union Power’s Integrated Vegetation Management (IVM) program, or what is known as the inspection, clearance, and maintenance of trees and right-of-way areas within our system, was adopted in 2005 with the goal of establishing a strategic program that would improve the reliability of our system and carry the Cooperative well into the future.

Prior to 2005, there was no program in place and all circuit work was done on a reactive basis, which meant that circuits may have been addressed in 20-year increments. With new reliability goals adopted for the system, a new, more proactive approach for vegetation management was put in place with the assistance of a consulting firm.

Since the beginning, our IVM program has increased our ability to provide safe and reliable service to our members by identifying and eliminating trees that demonstrate a threat to the safety of our workers, members, equipment, and power lines. The original plan called for an approximate 20-year process to take the overhead wiring maintenance to a “best in class” managed system.

And for 14 consecutive years, Union Power has remained the only co-op in the state to maintain its status of being a Tree Line USA Utility for its commitment to proper tree pruning, planting, and care in our five-county service area.

Phase One: The program consisted of a four-year “reclamation” phase, where all the distribution lines were pruned to distances dictated by a growth study done on the system. Fifteen feet became the standard adopted clearance distance for the Cooperative on distribution voltage wiring. Twenty-five feet became the minimum clearance distance for transmission voltage wiring. The “reclamation” phase ended in 2009.

Phase Two: The second phase, which ended in 2014, included the trimming of all transmission voltage wiring, partial clearing of all overhanging branches on multi-phase distribution lines, as well as, reliability-based trimming of circuits where the regrowth of vegetation proved to be excessive.

Phase Three: The third phase, which ended in December 2019, included the reliability-based pruning of some circuits and the culmination of the removal of overhanging branches on multi-phase lines.

All work to be done after 2019 will be fully reliability-based pruning along with the last and largest reliability-based project – the removal of overhanging branches on all single-phase wiring in the system. This is the largest undertaking for the IVM program since it targets work on roughly 65% (approximately 1,660 miles) of the overhead system. Due to the high-cost component of this phase of the program, it is projected to take five to seven years to complete.

Upon completion of the final reliability-based project, we should experience a more resilient overhead system in the way of storms that affect our service territory on a routine basis. As always, everything we do is done with the safety of our members, employees, and vendors in mind, as well as our commitment to provide best-in-class system reliability.

Get the Go to Grow

If you're planning on adding to your landscaping below a power line, there are a few things you should know to protect your "growing investment." Learn about planting guidelines from Union Power.