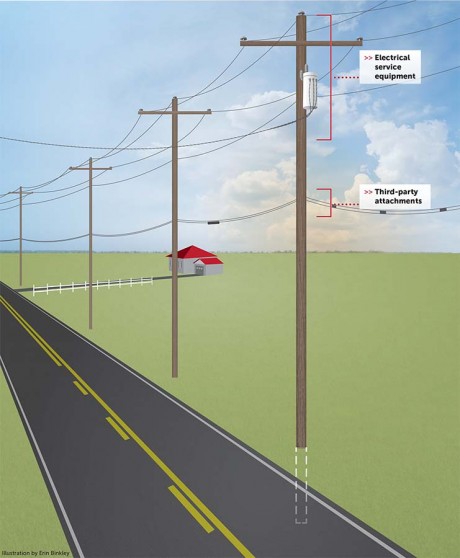 Electric cooperatives adhere to all safety standards that apply to pole equipment. Cooperatives rent space on poles to other utilities (cable TV providers, telecommunication services) for attaching their equipment. The co-op remains responsible for maintaining the pole and monitoring the equipment.

Sen. Brown and Rep. Stam were the lead sponsors for Senate Bill 88, which was signed into law this summer by Gov. Pat McCrory. The law clarifies that electric co-ops are exempt from Federal Communications Commission (FCC) pole attachment regulations, and it moves resolution of pole attachment disputes to the North Carolina Utilities Commission.

Often, the owner of a utility pole (such as your electric co-op) allows other companies (such as telecommunications providers) to attach to that pole through what is known as a pole attachment agreement, which relieves both companies from having to build their own poles. Electric co-ops sought to clarify our exemption from FCC regulation of pole attachments because these regulations do not allow an electric cooperative to recover the costs of attaching another company’s equipment to the electric co-op pole. As not-for-profit businesses, these costs eventually flow to the members of a co-op.

Electric cooperatives turned to leaders in the General Assembly who understand the cooperative business model and this issue’s potential impact on our members. The process of turning an idea into a law can often be a long and tangled one to navigate. Rep. Stam and Sen. Brown showed tremendous leadership and exemplified their steadfast support for electric cooperative members with the time and energy they spent guiding our issue through that political process.

While Sen. Brown comes from rural North Carolina and sees the impact electric cooperatives have on rural North Carolina on a day-to-day basis, Rep. Stam lives in an urban district with no electric co-op members, but understands and appreciates our mission to our members. Despite their different backgrounds, both saw how important this issue was to electric cooperatives and their members, understood the important role electric co-ops play in their communities, and worked tirelessly to get the bill passed.

Senate and House leadership as well as the bill’s other primary sponsors Reps. David Lewis (R-Harnett), Marvin Lucas (D-Cumberland) and Michele Presnell (R-Yancey) all played key roles in getting this important legislation passed. The bill had 25 total sponsors and co-sponsors in the Senate and 68 in the House.

Legislators understood the importance of this issue thanks to the hard work and effort put in by the leadership team at each electric cooperative in the state. The electric co-ops’ grassroots network of employees and board members across North Carolina made numerous visits and calls and sent e-mails to their local legislators. Without their work as well, this bill would not have been possible.