Another way to get electrocuted or land in jail 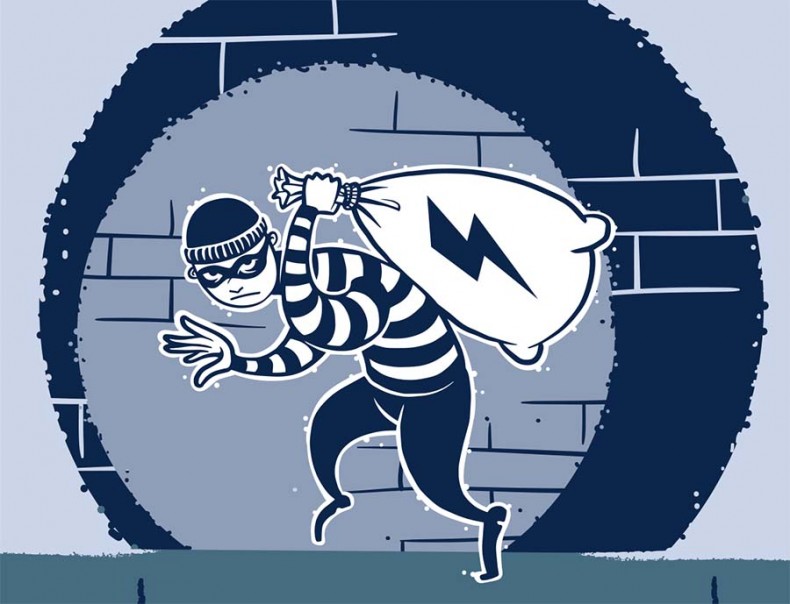 NOTE: This article has been updated since it was first published in 2013. You can also reference the most current article from our January 2015 issue.

You may have heard about someone who has tried to rig an electric meter to divert electricity to some other location. That person committed a crime. And whoever uses stolen electricity also commits a crime. If prosecuted, the crime can carry stiff fines and jail time.

North Carolina's electric cooperatives track down people who deliberately tamper with electric meters to steal electricity. Co-ops encounter cases in which consumers interfere with the operation of a meter or jump power to elsewhere to lower or avoid paying electric bills. Other cases involve attempts to reconnect to the electricity distribution system after a co-op performs a disconnection for some reason.

Meter tampering is not only a crime, it is also extremely dangerous

"We've seen people do some dangerous things — using knives, forks, magnets, jumper cables, and any number of other objects to get around paying for the power they use," said Tommy C. Greer, director of Job Training and Safety at the North Carolina Association of Electric Cooperatives. "Not only are these persons stealing from their fellow co-op members, they're also risking their lives and those of our workers."

According to the Cooperative Research Network, a division of the National Rural Electric Cooperative Association, power surging through a compromised meter can cause an electrical catastrophe. A short circuit could produce an arc flash bright enough to cause blindness and powerful enough to launch fragments of red-hot debris like shrapnel. Meter tampering often causes serious injury or death from electrocution, explosion or fire.

Only trained electric cooperative personnel wearing personal protective equipment should work on meters, Greer said. "Anytime you get into a meter base, you run a risk. With an arc flash, somebody could get killed or seriously maimed."

Electricity theft is not a victimless crime. Your not-for-profit co-op loses revenue and spends time and money to investigate tampering. These costs are then passed on to the entire membership. National estimates vary, but Power System Engineering of Wisconsin reports some $6 billion worth of electricity is stolen from utilities annually.

"It has been a problem for a number of years," said Dirk Burleson, vice president of member and corporate services for Rutherford EMC, the Touchstone Energy cooperative serving more than 67,000 member-accounts in 10 western North Carolina counties. "But since we installed the AMI system we discover it more often. The AMI system [advanced metering infrastructure] sends an alert anytime an account has an unexpected usage on which further investigation is required. Upon further investigation, if we find that meter tampering has occurred, then we immediately disconnect the account, require the individual to come into the office, and that individual is required to pay their balance down to zero. For the first offense, they are charged a $250 meter tampering fee and the second offense brings a $500 meter tampering fee. They also pay an additional security deposit. Based upon the circumstances, Rutherford EMC may prosecute the individual."

North Carolina law specifically prohibits altering, tampering with and bypassing electric meters. Persons found guilty are liable for triple the amount of losses and damages to the utility, or $500, whichever is greater.

Anyone who uses power from an altered meter violates the same law. Both the person in whose name the meter is installed, and the persons using the electricity, may be liable.

It's also illegal for an unauthorized person to reconnect a meter after the utility has disconnected it.

It's also illegal to alter or remove a load management device that your utility has installed, unless you've asked the utility in writing to remove it and the utility has not removed it within two working days.

This law also applies to gas and water meters.

These activities do not apply to licensed contractors performing their usual services within recognized standards.