The Fall and Rise of Electric Rates

If you follow the news — including news from your electric cooperative — you know that electricity prices are likely to rise during the coming years. To meet ever-growing demand for electricity to run electronics, appliances, heating, cooling and even cars, utilities nationwide need to build new power stations and distribution systems, re-tool existing plants to meet new standards, and add infrastructure that will accommodate renewable energy sources.

Let's look at the history and context of these rising electricity prices.

In the early days of electricity in 1910, it cost American consumers who could get it about $1.65 per kilowatt-hour (in inflation-adjusted dollars). As demand and production facilities grew, the economy of scale cut average electricity rates in the U.S. by 75 percent by 1940. Favorable economic times and the expansion of rural electrification in post-war America helped reduce rates even further, and by 1973 electric rates nationwide reached an all-time low of 8.9 cents per kwh. (U.S. Energy Information Administration-EIA) 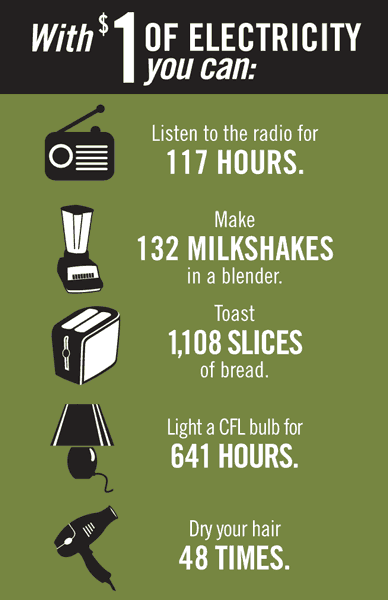 As Americans' appetite for electricity continued to grow in the 1970s and 1980s, utilities built new power stations and the grid expanded. It was a time of rising fuel and construction costs, as well as new environmental regulations affecting power generation, and these costs were passed through to consumers. Appliances became more efficient, and so did the industry's methods of producing and distributing electricity. In the economic boom of the late 1980s and 1990s, fuel prices actually declined, so electricity rates inched downward as well. Since then, fossil fuel prices have risen steadily. Between 2000 and 2010, average electric rates nationwide rose 11 percent in adjusted dollars to 10.46 cents, which is about where we are today. (EIA)

The rise of electricity rates in the U.S. has been gradual compared to the cost of other consumer goods. Using the prices of the day, between 1985 and 2005, health care costs rose 185 percent, regular gasoline rose 91 percent, food rose 81 percent and electricity rose 27 percent. (U.S. Bureau of Labor Statistics)

When you consider how reliable electricity is, the value goes up even more. Ask yourself: When did I last experience a major outage that wasn't caused by a natural disaster? For most of us, those times are the only occasions when we stop to think about what an affordable value electricity brings to our lives.

Ask your electric cooperative about budget payment plans. Your co-op also can help you manage your own energy costs. And see how much you can save by using the interactive calculator at www.togetherwesave.com

The EIA projects consumer demand for electricity to rise at an average rate of 1.5 percent per year through 2030 — North Carolina's demand could rise at a greater pace — with overall consumption increasing 45 percent by 2030. Meeting that demand has its costs. Your electric cooperative's sole mission always has been to provide you with safe and reliable electricity. By balancing a diverse portfolio of power supply sources (nuclear, natural gas, coal, renewables) and managing their own operating costs, North Carolina's electric cooperatives will work to keep your rates as affordable as possible as these demands grow.