Natural gas is outpacing coal as the leading electricity fuel

Energy made history in April when more electricity in the U.S. was generated with natural gas than with coal.Natural gas fueled 32 percent of the electricity, coal fueled 30 percent. In one way, that was a fluke, since electricity use typically declines in the spring and fall, allowing scheduled maintenance at coal plants. Sure enough, by May coal was back in first place at 33 percent compared with 31 percent for natural gas.
Then, again in July and August, the U.S. Energy Information Administration (EIA) reported that natural gas fueled more electricity generation than coal.  Recent trends will soon make the natural gas ranking the new normal.

As recently as 2005, coal sat way on top, generating more than half of all the electricity in the U.S. Natural gas provided just 19 percent.

There’s no single reason for this reversal. For one, utilities have retired their coal generating capacity at the rate of more than 3 percent a year since 2012. EIA estimates that the pace of coal plant closures to continue through 2020. And there is concern about coal’s effect on the environment and the resulting government regulation.

The natural gas drilling boom of the past seven years is also producing plentiful supplies at relatively low costs. A key reason for this trend is that natural gas generation technology is cheaper and easier to build than coal plants.

It all adds up to continued declines in coal as an electricity fuel, says Mike Casper, senior manager of generation and fuels for the National Rural Electric Cooperative Association. He says, “There are no electric co-ops that I’m aware of that are looking at coal to build new capacity over the next 10 years.”

This shift to natural gas, however, brings its own challenges, says Casper. Among those challenges:

To meet growing demand for electricity and reduce carbon emissions, North Carolina’s electric cooperatives plan to rely more on natural gas as a generating fuel and less on coal. As the North American supply of natural gas grows and its pricing stabilizes, applying it to electricity generation is also good for the cooperatives’ financial condition.

Natural gas and your cooperative 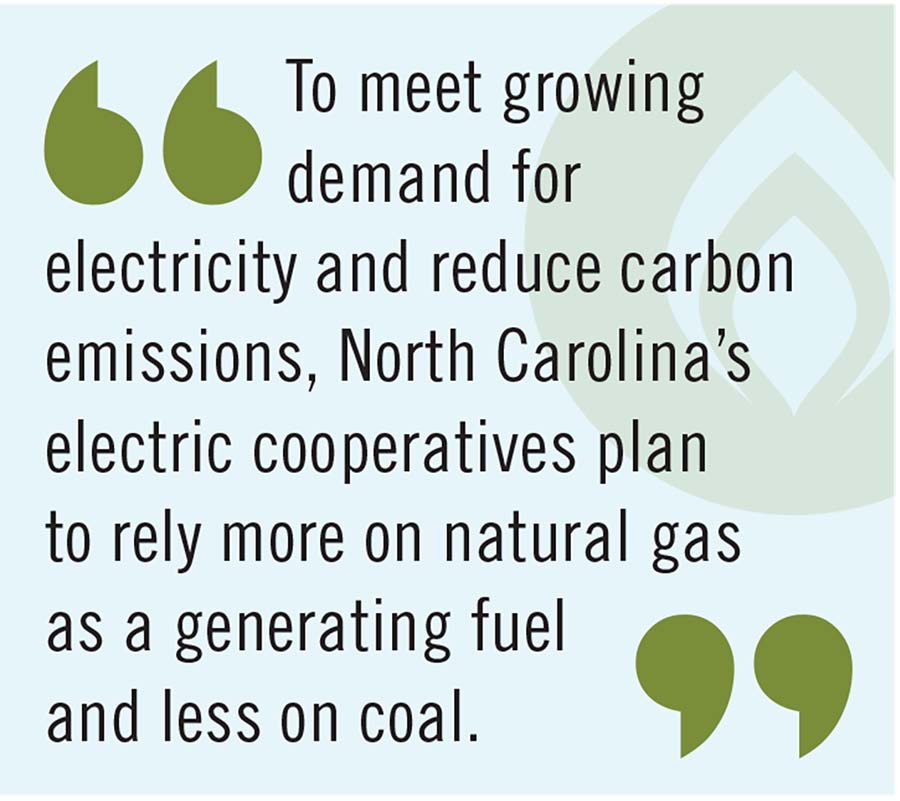 Also, 25 of the state’s electric cooperatives own 61.5 percent of Catawba Nuclear Station Unit 1, and a 30.76 percent interest in the common facilities of the nuclear station in York County, S.C. They also own four generating plants that produce power at times of peak demand and for emergency back-up power. A pair of 330-megawatt peak power plants— one in Anson County and another in Richmond County — run primarily on natural gas. On the Outer Banks, a 15-MW plant in Buxton and a 3-MW plant on Ocracoke run on diesel fuel and serve as emergency and back-up generators.

As electric utilities in the region retire coal-burning plants and turn to cleaner natural gas and renewable energy, they will need infrastructure to handle the transition. Four major utilities, organized as Atlantic Coast Pipeline, recently applied for permits to build a 564-mile pipeline to transport natural gas from Harrison County, W. Va., southeast through Virginia (with an extension to Chesapeake), and south through central North Carolina to Robeson County. The governors of all three states have pledged their support. Pending regulatory approval, construction could begin in the second half of 2016 and the pipeline could be in service in late 2018. The four utilities are Dominion, Duke Energy, Piedmont Natural Gas (to be acquired by Duke Energy) and AGL Resources.