All aboard the electric bus

Bus fleets are prime for electrification 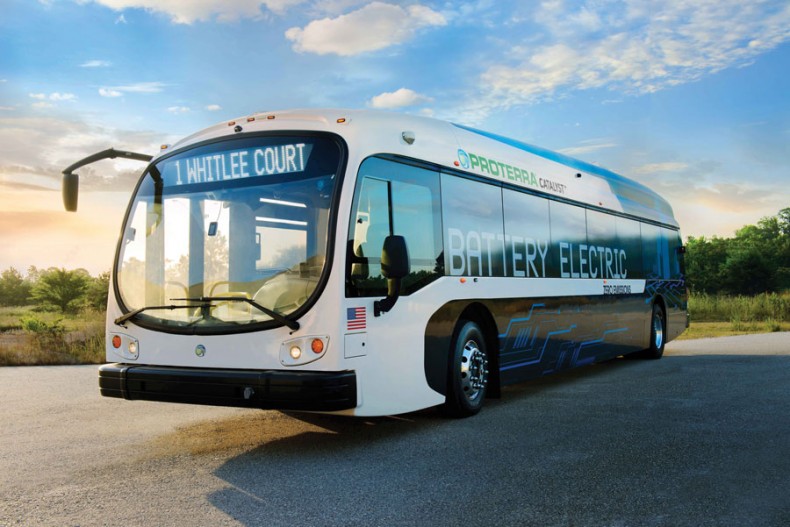 In the near future, consumers can expect to see electric buses as a viable transit choice for cities, towns and school districts.

Electric vehicles are revving up! With over half a million electric cars on the road, several companies are turning their attention to a new market niche, electric buses. Several companies, including Proterra, GreenPower Bus, eBus and Lion Bus are actively selling and manufacturing electric buses while others such as Tesla have announced plans to break into this market.

Buses may seem like an odd choice for innovation, but they make ideal candidates for electrification. First, buses have predictable, set routes. This means it’s easy to plan around their battery range limitations. Buses also have long idle periods, typically at night, that are perfect for re-charging. Next, even though electric vehicles are more expensive to buy than comparable fossil-fuel counterparts, they are less expensive to operate because kWhs are almost always cheaper than gallons of fuel on a levelized basis. Buses are frequently in use, allowing them to leverage their cheaper fuel source. Buses are also able to take advantage of regenerative braking, an electric vehicle feature that converts kinetic energy (usually lost while braking) back into useable energy. Lastly, buses provide enough size for a truly immense battery pack. Proterra’s Catalyst E2 bus debuted last year and can carry a 660 kWh battery the size of a twin mattress, giving it a range of 350 miles.

On the consumer side, there are two primary benefits: Health and noise. Electric buses run much cleaner than their diesel counterparts, though total emissions will vary depending on how your region generates electricity. Massachusetts estimates switching from diesel to electric power will reduce vehicle CO2 emissions by more than 70 percent. Even if emissions aren’t completely erased, it does change where they are produced. Bus passengers, nearby pedestrians and motorists will have cleaner air as they travel. This is an especially important benefit for children riding electric school buses. The other positive of electric buses is that they’ll run quietly, contributing less noise pollution to the streets they travel.

But it’s not all rosy for electric buses — they have a challenging road ahead. For one, the cost. The average school bus in North Carolina cost $33,000 in 2014, according to the UNC Charlotte Urban Institute. Electric school buses from Lion bus cost between $200,000 and $300,000. The Proterra Catalyst E2 commuter bus retails for a whopping $800,000, unsubsidized.

So when will you be riding to work or school in an elegant, whisper-quiet electric bus? Well, several cities including Philadelphia, Los Angeles and Miami have already launched pilot programs, and Proterra is planning to triple its production in 2017 from 30 buses to 90. While that might not sound like much, battery costs are falling rapidly, which will make electric buses a viable transit choice for more cities, towns and school districts.

The downside, of course, is now you’ll have no excuse not to talk to your seatmate.